The concept of robotics is not new nor is the existence of various kinds of robots. But, over the period of time the nature of the robots has surely changed. Robots have become more sophisticated in what they do, increased interactive capabilities and so on. Yet, there are lots of things that we want them to have it.

Nature also plays an important part in robotics. Yes, robotics can and have learned much from the nature. With the important knowledge of nature, robotics can unlock many evolutionary puzzles that have been just a riddle over the years.

Just think about it, a combination of robotics and nature. Today, we are presenting some of the most advanced robotic animals that are real and magnificent. 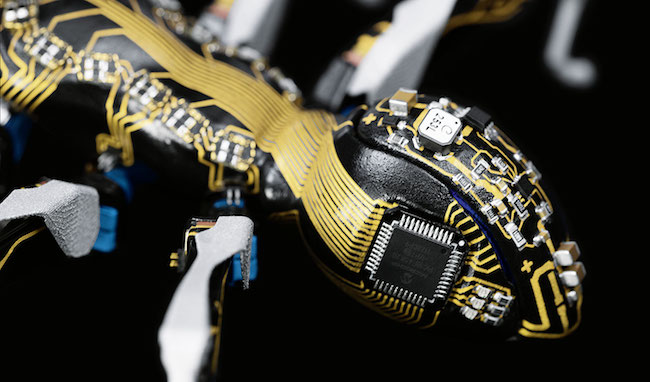 Ants are known for their works ethics and unity so why should it be any different form ant robots. The Germany based automation company, Festo initiated BionicANTs, with not only projecting the delicate anatomy of the natural ant, but also aiming to transfer the unique cooperative behavior of the creatures to the world of technology using complex control algorithms.

They will be able to communicate with each other to coordinate their actions and movements. While this project is still in its initial stage, the concept of artificial ants and how autonomous individual components can solve a complex task together working on a system can open many possibilities, and can also change the future of robot making process.

Deep sea works are costly and at the same time extremely dangerous for humans. The present day instruments and automatic underwater vehicles that perform deep sea tasks are bulky, slow with low maneuverability and extremely expensive.

On the other hand, robots are perfect for the task, especially when they can imitate a real life sea resident. Engineers from Kongsberg Maritime along with Statoil (Norway based companies) collaborated with Eelume to produce the first ever bio-inspired snake robot.

Named after the institute, Eelume can slither its way around very congested surroundings where no vehicle can reach. It will also reduce costs related to sub-sea inspection, maintenance and repair operations significantly. 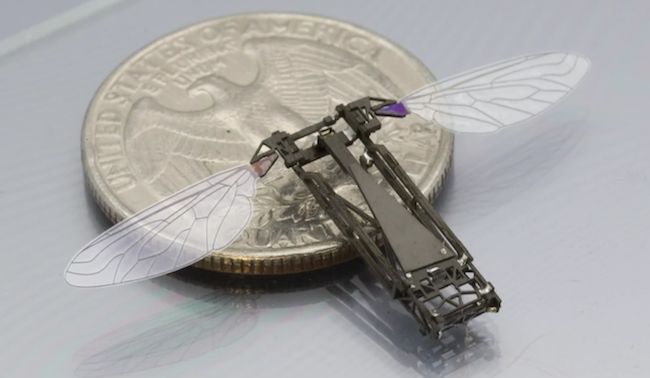 Bees play a crucial role in our life, it is said that they are responsible for one out of every three bits of food that we eat. According to the U.S. Department of Agriculture, roughly 35 percent of the world’s food crops and about three-quarters of the world’s flowering plants depend on different insects to pollinate them and bees are the most important of them.

But, the recent decline in their population has raised some serious problems in agricultural industries in major parts of the world.

In 2014, a Japanese team of researchers initiated the first steps towards building what they called RoboBees, of bee robots that could help pollinate seeds in flowers and fruits. Although there are many limitations to the technology and it would need considerable amount of advancements to be commercially ready. 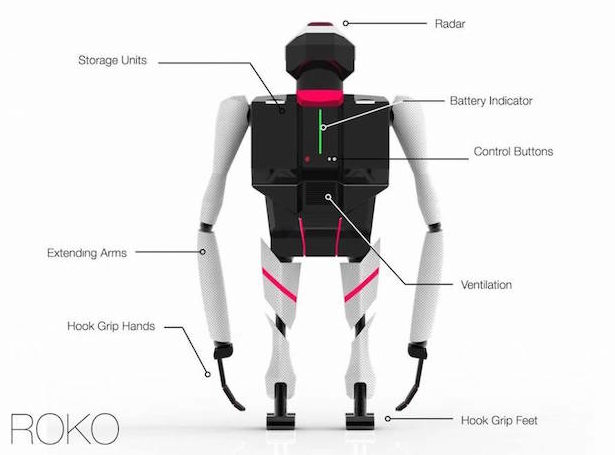 Roko is designed to carry small packages like first aid kits and important supplies in remote forested areas that can’t be reached by regular means. It deploys powerful sensors to detect its immediate environment and has two extendable hand with hook-grip to climb trees.

To find its destination, Roko will use two different types of navigational systems, i.e. short-distance navigation system to find its way through the forest, and a long-range GPS to reach its final destination successfully.

After the initial test, it will be coated with actual fur, which will work as a camouflage to make it safer in the wild. Scientists have also programmed Roko to auto learn other activities while on the run. Currently it is powered by a hydrogen fuel cell.

After years of intense studies, scientists have come to conclusion that earliest land animals had certain tail that helped them with crawling. To test the findings, scientists at the Georgia Institute of Technology along with other institutes initiated a study.

To successfully perform it, they developed a robot called MuddyBot. Inspired by African mudskipper, the MuddyBot helped them to understand how earlier vertebrates emerged from the water and adapted to land.

The researchers say that the evidence supports the idea that the first animals to move from the water onto land most probably have had tails. A muscular tail may have played a more important role in their locomotion.

While testing the MuddyBot for results, researchers found that while fin “walking” is an effective way for the mudskipper or in this case MuddyBot to scoot across flat surfaces, an undulating push from a tail is helpful for ascending sandy slopes. 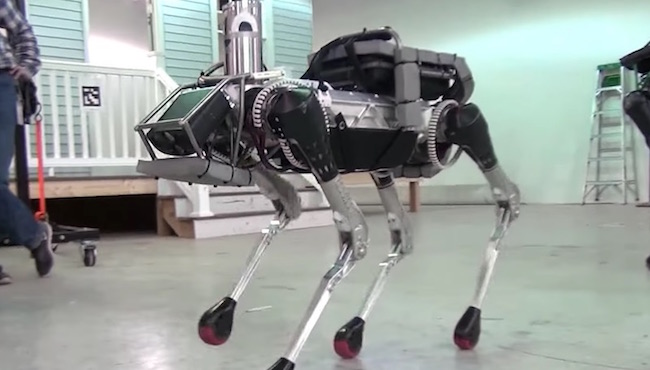 Boston Dynamics, a subsidiary firm of Alphabet Inc., is a well known figure in the robotics industry. Over the years the company has created many frontline robots for military and civil purposes. One of their newest creation SpotMini is a small four-legged robot that you can comfortably fit in our office or home as a companion.

SpotMini can assimilate into your work and home environments easily. It also has a strong power backup, according to various test results this machine can run for more than an hour on a single charge. The sensor suite includes some important equipment like stereo cameras, position/force sensors and an IMU (inertial measurement unit). They can help you in your daily chores, especially for the elders.

On an average, a Kangaroo can attain a speed of about 20–25 km/h while hopping, but they can also reach higher speeds of up to 70 km/h over short distances. Based on a real life kangaroo, a German engineering firm has developed bionic model. Like its natural model, it can recover the energy while jumping, store it and efficiently use it for the next jump.

Have you closely examined a spider web? Sometimes it just looks like a real mess, isn’t it? Well, what if we say, now you can have your own spider inspired net made by bots? The Stuttgart based Institute for Computational Design had recently exhibited a “Mobile Robotic Fabrication System for Filament Structures.”

The system uses a set of bots with spools of carbon fiber, which work together to weave things like hammocks, so you can rest. Isn’t that cool?

The first sight of a cockroach usually strikes fear in many people’s hearts, but what if they are coming to save you? Exactly, that’s what researchers at UC Berkeley had in mind while developing a RoboRoach prototype.

The RoboRoach or compressible robot with articulated mechanisms (short for CRAM) has a jointed exoskeleton and a soft shell, which help it to shape shift and move through small spaces. These CockroachBots can prove to be a lanky life save in disaster hit areas and can locate survivors.

Nuisance birds can cause all kinds of problems in any particular areas and there has been no permanent solution for that. Birds often stick around once they’ve found an area they like, they can cause excessive crop damage, spread disease and even disrupts busy flight paths putting everyone at risk.

That’s where the ‘Robird’ comes in. It’s a lifelike model of predatory birds that can keep those troublemaker birds away. The model works by triggering the instinct of birds (real one), through the combination of silhouette and wing movement.

After several live tests, they were able to significantly reduce pest activity by up to 70 percent. While they are currently controlled wirelessly, a fully automated version is under development.

Read: 12 Most Advanced Humanoid Robots You Need To See

Boston Dynamics’s Cheetah can run nearly 30 kilometers per hour (kph). Its overall stability, which makes it an outstanding bot is controlled by computer. The computer adjusts the placement of each foot and dictate how far forward they touch the ground with respect to the hips and body on every step. The research project is currently being funded by the Defense Advanced Research Projects Agency (DARPA) for assisting military personnel in battle situations and other emergencies.

Kevin Kit Parker, a Harvard researcher along with other university researchers introduced the idea of taking apart a rat’s heart and putting it into a tissue-engineered stingray which first came to his mind during a trip to the New England Aquarium, and it was something extraordinary.

Research of this magnitude can lead us to a significant advancement in newer generations of robots, it can also help us gain a much better understanding of the human heart and other muscular functions. 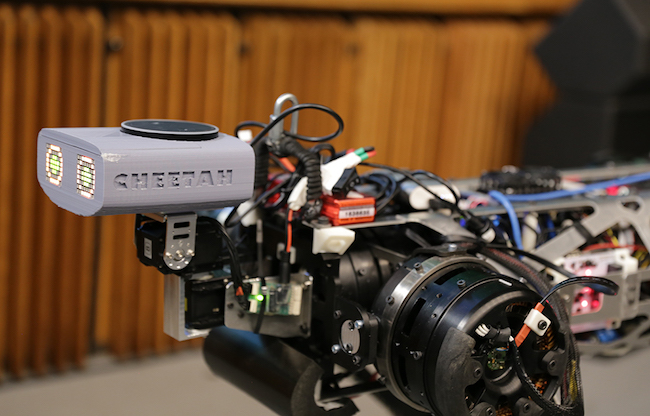 We all are somehow familiar with the works of MIT as it has been engaged with many robotic missions in the previous decade or so. Their current assignment cheetah 3 is the 3rd version of the cheetah inspired robot that MIT has been working on.

The Cheetah 3 was recently unveiled at TC sessions. While its previous versions have been impressive, the MIT now have shifted their attention towards a more practical use robot that could perform a search and rescue. Due to its four legs, and upgraded balancing the model can conduct certain actions that traditional robots have not been able to do before. 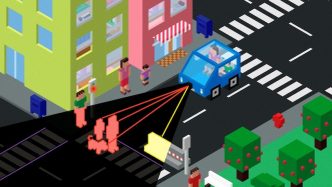