Android ecosystem is continuously expanding. More than 80 percent of mobile devices is running on Android. New mobile Original Equipment Manufacturers are emerging in every corner of the world, introducing new screen size, chipset and firmware. Android developer’s job is getting tougher with increase of different kinds of mobile devices.

The good news is, developers now have unlimited access to several advanced cloud based solutions to execute automated test on real devices for quality assurance. Tons of mobile testing frameworks are emerging every year to ease the developer’s job.

We are presenting the best Android testing tools and frameworks currently available in the market. They will help you ensure better user satisfaction, enhance the quality application and minimize the overall time spent on fixing bugs.

Selendroid is test automation framework for native or hybrid Android apps and mobile webs. It can be used on emulators and real devices. It comes with a built-in Inspector to simplify test case development. You can also integrate it as a node into the Selenium Grid for parallel testing and scaling.

The framework is fully compatible with JSON wire protocol and you do not need to modify the app script to perform automated testing. It supports multiple gestures, hot plugging of devices as well as it can interact with different Android devices. 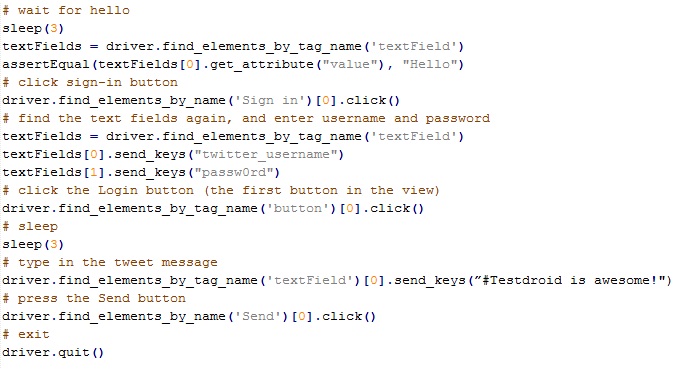 Appium allows you to test hybrid and native apps without an SDK or recompiling your app. It’s an open source project that aims to automate any mobile application from any language, any testing framework. You can create your test cases in your favorite programming language (JavaScript, Java, PHP, C#, PHP, Ruby, Python etc.).

It gives you freedom from selecting tools, and having to install and configure the device to test. Furthermore, if you are familiar with Selenium, then it becomes easier to use Appium in mobile testing. They use the same WebDriver and DesiredCapabilities.

TestFairy shows you what exactly was done while testing mobile apps, and what exactly went wrong on the client side. It shows you a video of the exact test that was executed in your application, including CPU, memory, network and other necessary details.

You need to upload your APK file to the TestFairy platform and it will take APK file apart, inserting the essential hooks into the correct places to gather information. Further, the tool will reassemble it for distribution to beta testers. And yes, the platform is 100% free, but there is an enterprise package for big projects.

UI Automator provides a set of APIs to build User Interface tests that perform interaction on system apps and user apps. It can be used for mainly writing black-box testing cases, where code does not rely on internal structure of the application.

The testing framework comes with a viewer to inspect layout hierarchy and an API to retrieve state data and perform operations on the target device. You can also scan and analyze the individual UI modules currently dispatched on the device. 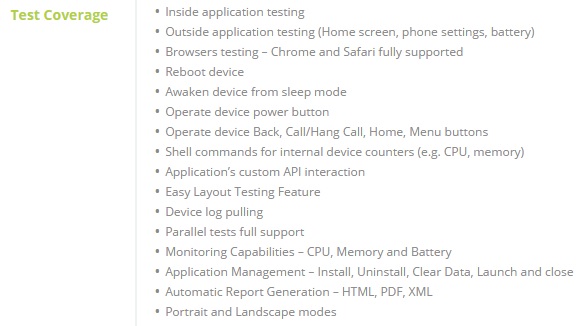 SeeTest is a strong mobile test automation framework, by ExperiTest. It uses a simple plug, record and play mechanism. It identifies objects by Native of web properties and you can run the same scripts on different devices and operating systems.

You can use SeeTest with integrative tools and CI environments which allows for the extension of the code environment. Responsive website and User Interface (plus gesture/keyboard) testing are well supported by this tool. Moreover, there is an option for cloud-based hosting, which offers complete device inventory management, scheduling and enforcement. 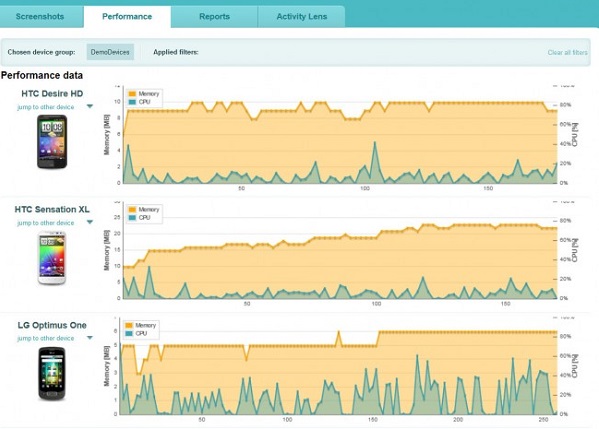 Testdroid allows you to test Android (as well as iOS) apps on thousands of real devices with automation or manual testing. It’s a commercial product that enables continuous development and testing and can save up to 60 percent of budget for mobile app development-testing cycle.

The tool comes with a mobile game testing feature that helps you develop fantastic games with no bugs and all done in agile way. It warns you about all the issues after every code change, continuous testing delivers instant results and gets your application earlier in the market. 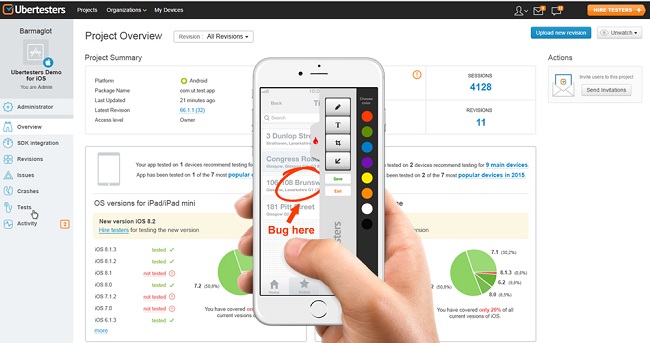 Ubertesters provides a wide range of tools for distributing new builds and reporting bugs. The in-app bug reporting feature submits errors with edited screenshot directly from your app. You can track all testing sessions and crash logs in real time from the dashboard. The platform also lets you hire people to assist and test your application on a variety of real devices, under real-world conditions.

HockeyApp is a similar platform for distributing the beta version of app. It gets feedback from users, analyzes test coverage and provides you detailed crash reports. Price starts at $10 per month. 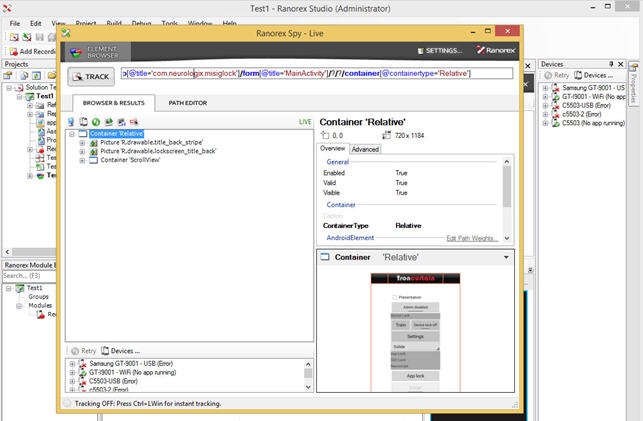 Ranorex is not only good for testing latest applications, but also subversions of Android beginning from version 2.2. It gives you detailed reports with screenshot. The GUI object recognition handles almost all modern apps, including dynamically built user interfaces. There is a powerful object mapping editor that significantly decreases test maintenance. 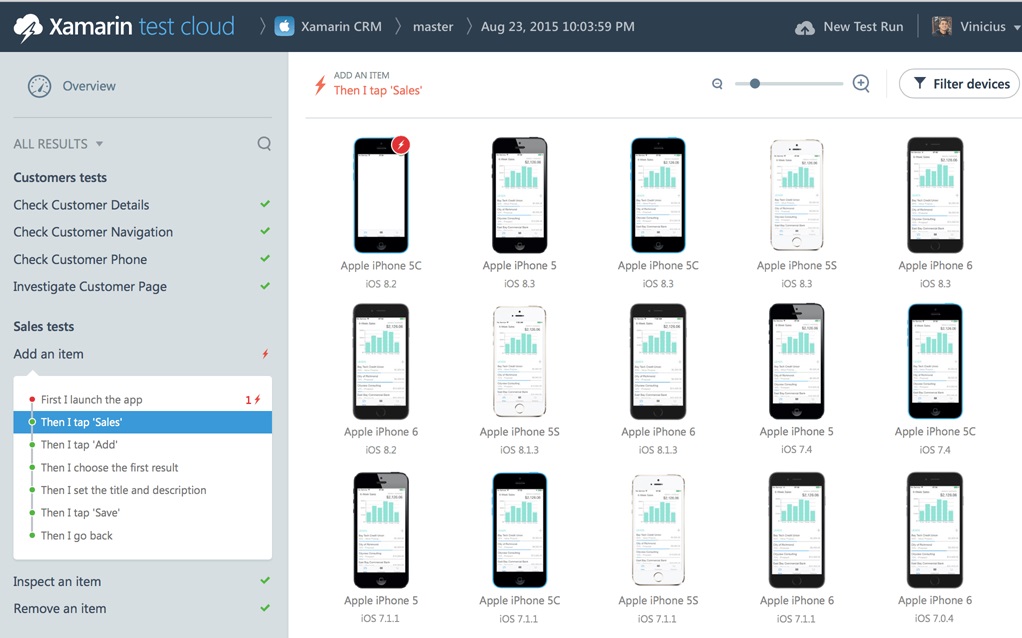 Calabash is a cross platform testing platform for Android, iOS native and hybrid applications. It is designed for non-technical people so that they can create and execute automated acceptance tests for apps on both major platforms. It has libraries that enable test code to interact programmatically with hybrid and native applications.

The tests are described in Cucumber and then converted to Frank or Robotium in run-time. There is a cloud based testing lab, which lets you execute Calabash tests on 1000+ mobile devices in the cloud. Moreover, it supports around 80 natural language commands (controllers), and new controllers can be implemented in Java as well as in Ruby. 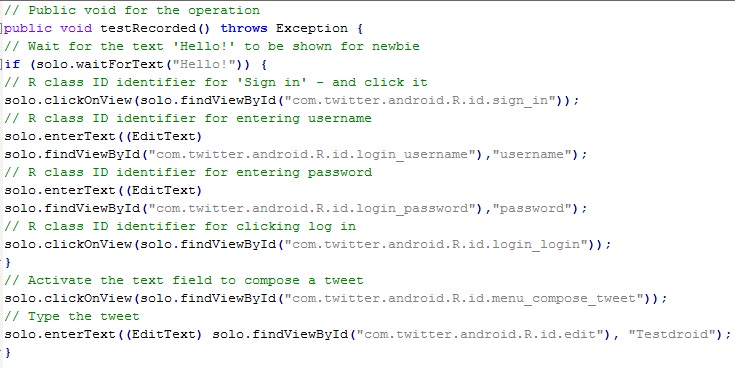 Robotium was once the most widely used open-source Android framework in the early days of Android OS. It has full support for native and hybrid application, and requries minimal knowledge of the application under test. Also, you do not need to have the source code – apk file is sufficient for testing real applications.

Robotium allows test case developers to write function, system and acceptance test scenario, spanning multiple Android activities. It comes with a tool called Testroid Recorder that can be used for test creation. It records every step you take and converts to JavaScript for future modification. 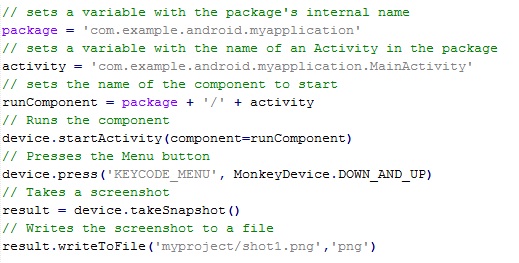 The MonkeyRunner tool is designed to test apps, run unit test suits and to test devices at functional level. You can write a Python code to install test package or Android application, run it, send keystrokes to it, take screenshots of its UI and store it on workstation.

The MonkeyRunner API can apply more than one test suite across multiple emulators or devices. However, you need to write testing scripts for each device. In addition, tests require adjustment each time when UI of tested program is altered. 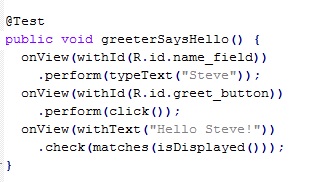 Espresso is an automated testing framework by Google. The core API is small and easy to learn, and tests run optimally fast. It is build on top of the Android Instrumentation Framework, and primarily used for black box testing.

Espresso tests state interactions and assertions without distraction of custom infrastructure and boilerplate content. It also lets you leave your waits, syncs and polls behind while it asserts on the application testing. 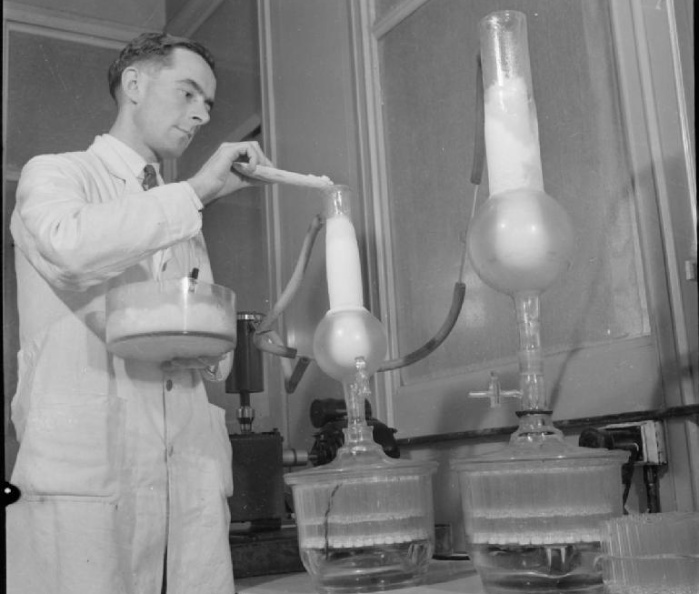 18 Most Important Medicines Ever Discovered 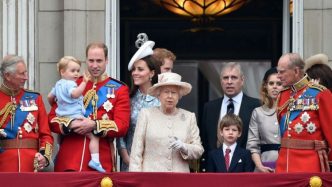 7 Different Types of Governments In The Country