An astronomical clock is not just any clock that we use in our daily life. They are endowed with special abilities to display astronomical information, such as relative position of the sun, moon, constellations and sometimes planets. It was all because of great minds such as Nicolaus Copernicus and then Galileo Galilei, that in 18th century astronomy became a prominent subject and revived mass interest in astronomical clocks.

The very first of these clocks was probably built by Su Song of the Song Dynasty in the 11th century. Over the period of time, many remarkable and noteworthy of these huge mechanical devices were made. Today, we are showcasing some unbelievable astronomical clocks from around the world. 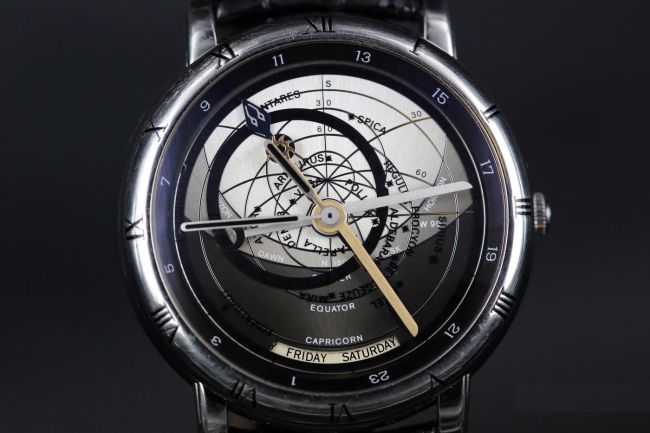 Ulysse Nardin is one of the oldest and finest Swiss watch manufacturer founded in 1846. The company is famous for the production of “Trilogy of Time”. A collection of three different astrological watches starting with the Astrolabium Galileo Galilei in the year 1985.

The Astrolabium displays local as well as solar time, the orbits and eclipses of the sun, the moon and the position of several major stars. The watch is exceptionally helpful for amateur astronomers and space junkies, who don’t mind checking on the moon and star while learning the local time. 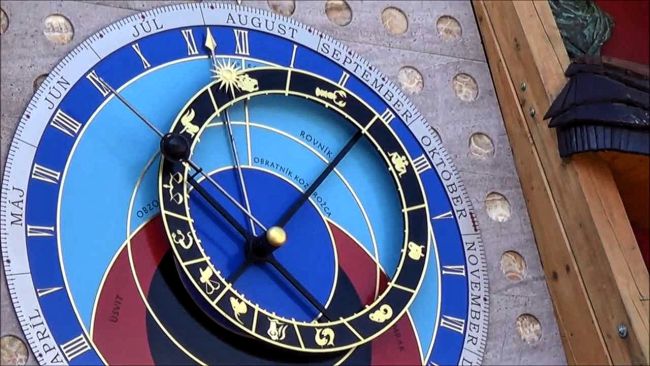 Stará Bystrica is a municipality in Čadca District in the Žilina Region of Northern Slovakia. The small municipality holds the world’s most accurate and youngest astronomical clock in the world. Build in 2009, the modern astronomical clock has been already a favorite tourist destination in the country. The Stara Bystrica is described as Slovakia’s largest statue made of wood which in fact represents the Virgin Mary.

The clock tower has two bells, one is used for time announcement and the other one make special effects in the background of movement of seven wooden statues of important figures from Slovakian history. However, the most important part is the astrolabe, a machine that displays the position of the sun and the moon and the lunar phases. 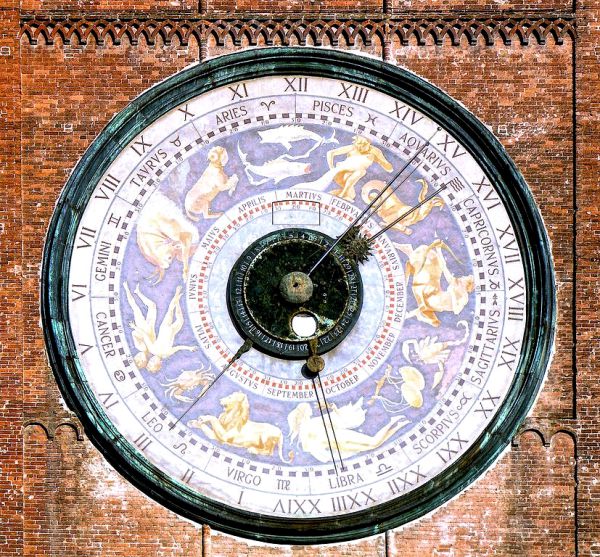 The Torrazzo is the bell tower of the Cathedral of Cremona, Lombardy, Italy. At the height of 112.7 meters (343 ft 6 in), it is the third tallest bell tower in the world, the first being the tower of St. Martin’s Church in Landshut, southern Germany, and the second at the Church of Our Lady in Bruges, Belgium.

The Torrazzo’s fourth storey carry the largest astronomical clock in the world. The mechanism of the clock was built by Francesco and Giovan Battista Divizioli (father and son) between 1583 and 1588. It accurately displays the sky with zodiac constellations and the Sun and Moon directions. 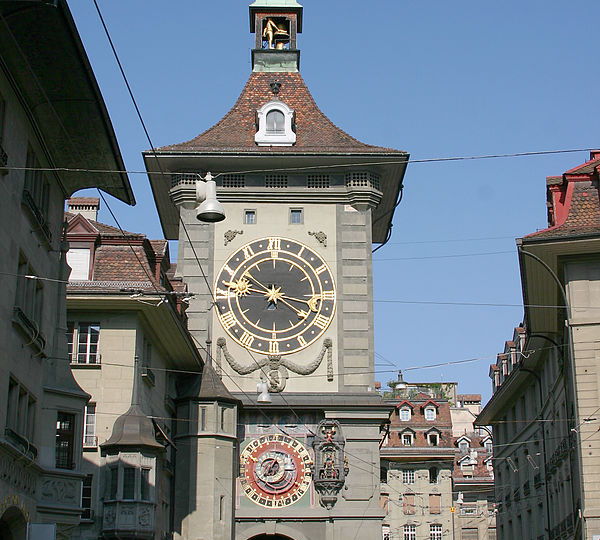 The Zygtlogge tower in Bern, Switzerland is a landmark structure of the 13th century. Although it was originally meant to be a guard tower and a prison, it also served as a clock tower, which was later added into the structure in the 15th century. The dial of the astronomical clock is similar to an astrolabe.

The planisphere is divided into three zones representing sky on three different hours. Around the planisphere, there is web like metal cutout which represent the zodiac and also features a Julian calendar dial. A moon dial circles the inner ring of the zodiac, displaying the moon phase. 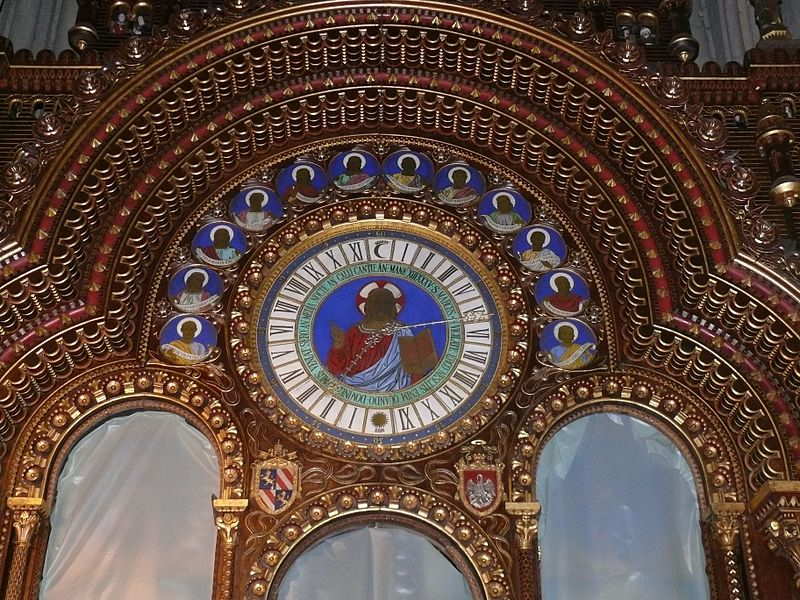 The Beauvais astronomical clock is situated in the cathedral of Saint Peter of Beauvais in northern France. The clock was built between 1865 to 1868 by Lucien Auguste Vérité. The 12 meters high and 6 meters wide clock has 52 different dials that display rising and setting of the sun and moon, tidal times and positions of several planets along with the local time of 18 cities all around the world. In the middle, there is a portrayal of Jesus Christ with his twelve disciples (apostles) where hours and minutes are shown. 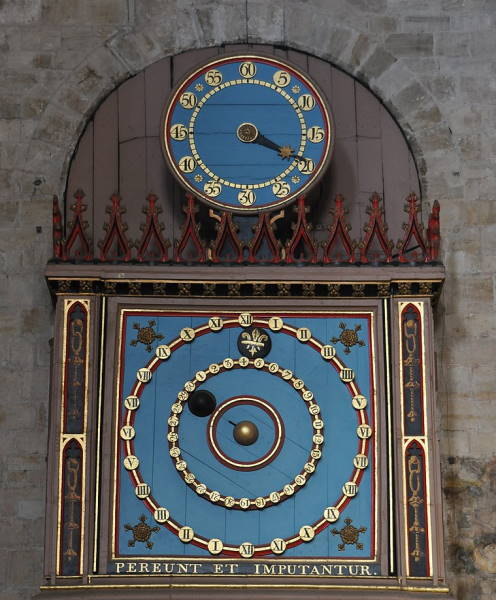 Situated in Exeter Cathedral in England, the Exeter Cathedral astronomical clock is believed to be built in the fifteenth century sometime around 1484. As you can see, the clock has three visible rings. The outermost ring consisted of black disc with fleur-de-lis, which represents the sun. It completes an orbit every 24 hours.

While orbiting, the head or upper point displays local time whereas the tail of fleur-de-lis shows the day in a lunar month. The sphere inside the second ring is the moon, painted in half black and half silver. It revolves around its own axis to show the phase of the current moon. In the center, it’s the Earth situated in the third and final ring in golden color.

The Gdańsk astronomical clock was constructed by a German clock-maker Hans Düringer between 1464 to 1470. It is very special in the Polish St. Mary church and has a unique remnant of historic timepieces all over the world. The clock is entirely made of wood and at a height of 45 feet it may be the tallest wooden clock in the world. It tracks everything from the local time, the relative position of the moon and sun to the zodiac signs and the calendar of saints.

According to legend, Duringer was deliberately blinded by the church authorities after the completion of the Gdansk Clock so that he will no longer be able to produce a clock of same significance and beauty anywhere else. However, he went on to complete another piece of his own master work in a neighboring town, so the legend may just be a legend if not truth. 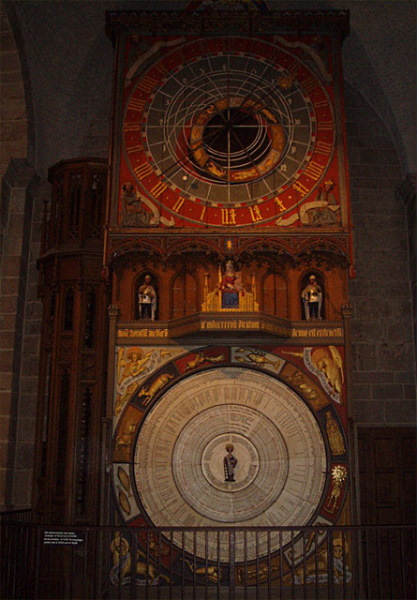 The Horologium mirabile Lundense is a 14th century astronomical clock situated in the Lund Cathedral, Sweden. The clock is divided into two parts upper and lower, the upper board is an astronomical clock showing different phases of moon and sun’s direction.

The lower board is actually a calendar, not any calendar though, it can be used to calculate the date of different religious holidays when it will fall. In the middle of the circular calendar stands Saint Lawrence, the Patron Saint of the Cathedral and the four Evangelists. In 1837, the clock had been stored away from the public displays, but was again restored back in 1923. 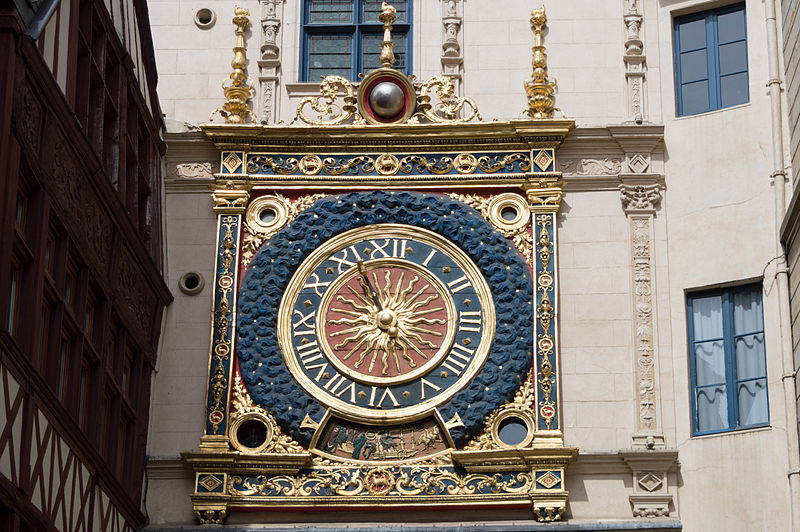 The pride of the people of Rouen, the Gros Horloge situated in Normandy, France, is a 14th century astronomical clock. Its mechanism is one of the oldest in France. The clock is installed in an arc crossing on the busy street of rue de Gros- Horloge on the both sides of the tower, just like a twin sister. The dial is 2.50 meters in diameter, with one hand showing the hour.

The phases of the moon are indicted in the Oculus of the upper part of the dial. It completes a full rotation in 29 days. The week days are shown in an opening at the base of the dial with allegorical subjects for each day of the week, i.e moon (Monday), Mars (Tuesday), Mercury (Wednesday), and so on. 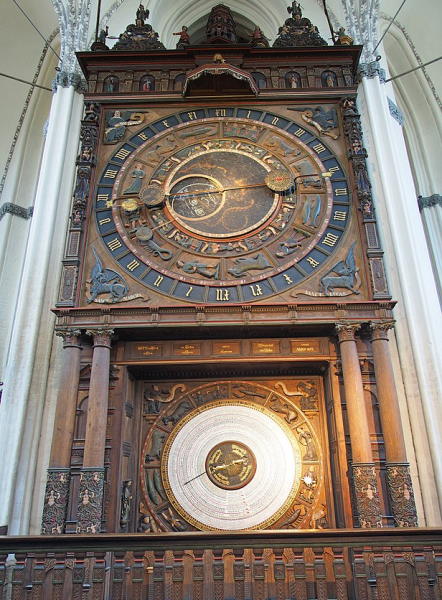 This monumental astronomical clock was built by Hans Düringer, in 1472. The clock mechanism is divided into three different stages. The first consist of a Apostle-go-around. The middle one shows daily time and zodiac and moon phases. The last and the bottom clock is actually valid till 2017. The clock is most probably the only working clock of this kind with its original instruments.

The astronomical clock of Besançon Cathedral, France, was installed in 1860 in a replacement of the earlier Bernardin’s clock after it stopped working in 1857. It took 3 years for Auguste Vérité to construct the replacement. The clock is meant to demonstrate each and every second of the day when Jesus was resurrected and it impact upon the existence of human kind in the world. 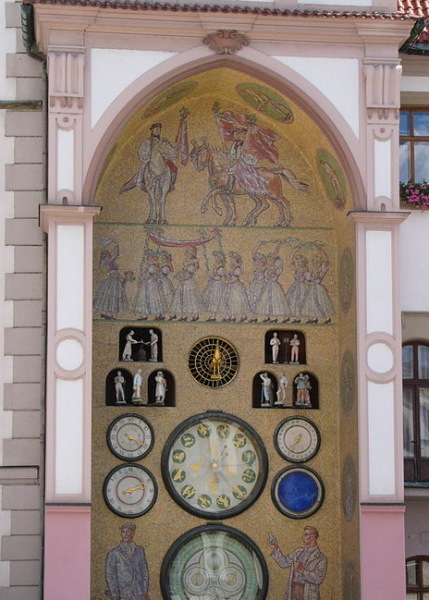 The Olomouc Astronomical Clock is located in Olomouc, a major city of Moravia, Czech Republic. The present-day appearance of the Clock dates back to the mid 20th Century and possess the traces of the former aesthetic of socialist realism. The mosaic decoration of the Clock is made of the various portrayals on the lateral sides of the recess depicting characteristic work for each month of the year. Figures representing the different working classes are depicted in the lower part of the mosaic decoration, while the king and the nobility are at the top of the recess.

The Strasbourg astronomical clock is located in the Cathédrale Notre-Dame of Strasbourg, Alsace, France. The current clock was installed sometime in 1843. There were two other clocks before this. The first one had been built in the 14th century, the second in the 16th century. Its main features include a perpetual calendar (including a Gregorian computus), an Orrery (planetary dial), a display of the real position of the Sun and the Moon, and solar and lunar eclipses.

The Sørnes Clock was named after its designer and inventor Rasmus Sornres. It is largely believed that Sornres had designed four of these clocks but currently only one is remaining. The clock is a wonderful fusion of art, science and craftsmanship. This clock is unique in many ways. Its impressive features include two different types of calendars, the estimated locations of the sun and the moon. It also includes solar and lunar cycle corrections, eclipses, etc,. 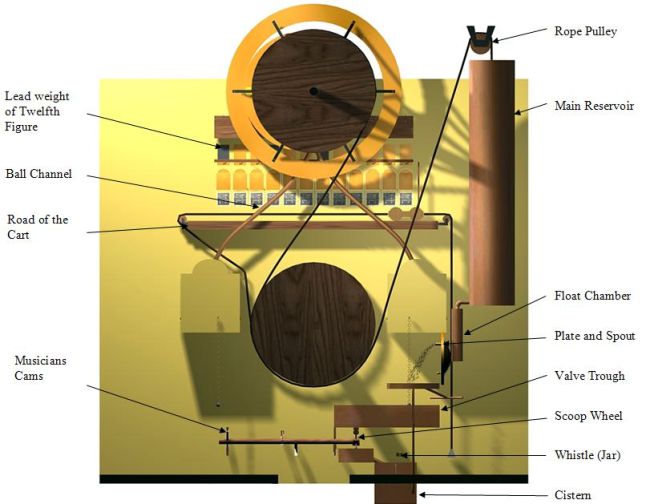 Ismail al-Jazari was a Muslim polymath, who is best known for authoring The Book of Knowledge of Ingenious Mechanical Devices in 1206. In this book, he described more than 100 mechanical devices along with instructions on how to construct them.

According to the description, the castle clock was 11 feet tall and capable of much more that just timekeeping. It was powered by water, which was injected by a main tank. The regulated water, then controls and activate a chain of events which include automated time telling, the appearance of a mannequin after every hour through automated doors and robot musicians. It also includes a display of the zodiac and the solar and lunar orbits.

To the historians al-Jazari’s book appeared to be quite popular at that time as it appears in a large number of manuscript copies. In his book, he also describes the massive water-powered astronomical clock which he named the “castle clock”. 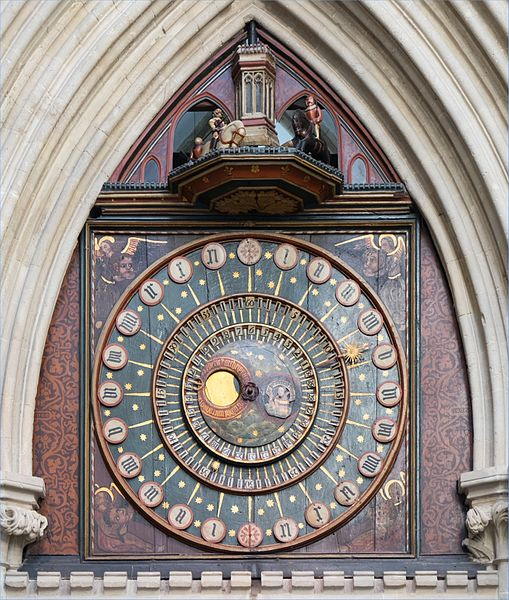 The famous Wells clock is considered to be the second oldest clock mechanism in Britain to survive in original condition. Its surviving mechanism, dated between 1386-1392 was replaced in the 19th century and now it still operates in the London Science Museum. The dial represents the geocentric view of the universe with the sun and moon revolving round a central fixed earth. 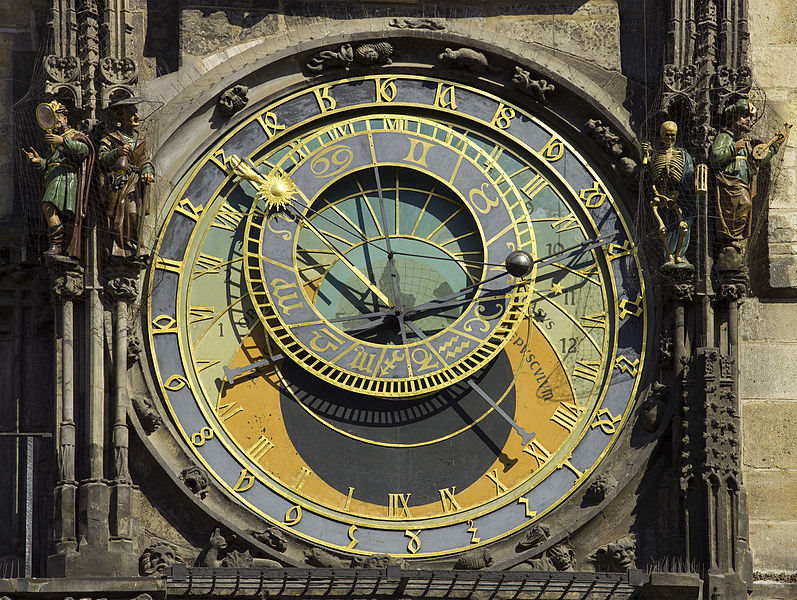 The Prague astronomical clock, also known as the Prague Orloj, in Czech Republic, is the third oldest astronomical clock in the world which is still in operation. Mounted on the southern wall of Old Town Hall since 1410, the Orloj has been the pride of capital city of Prague for over 600 years.

The clock mechanism is composed of three main components, namely the astronomical dial producing the position of the sun and moon, a calendar dial representing the months and “the Walk of Apostles”. 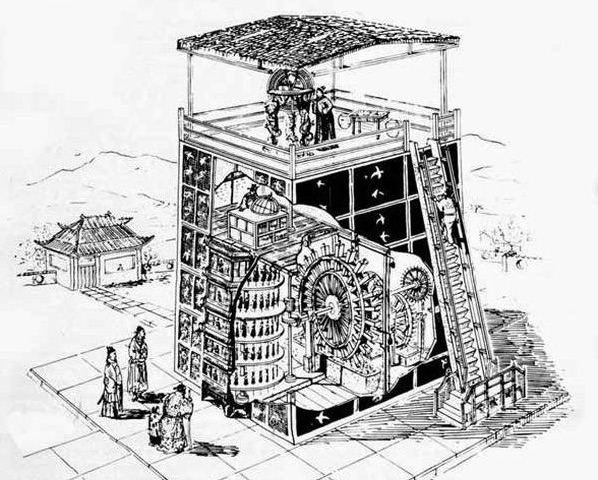 In 1092, Su Sung, a Chinese polymath designed and constructed a full scale water-powered astronomical clock which was way ahead of its time both in accuracy and innovation. Unfortunately, the original clock was destroyed sometime in 1126, but a working replica of the Su Sung’s clock exists in the National Museum of Natural Sciences, Taichung city, China. 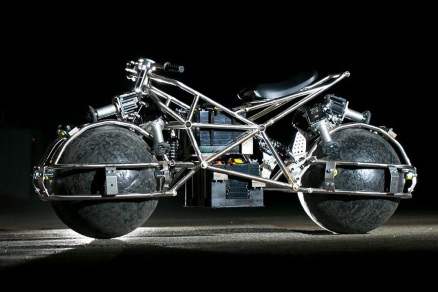 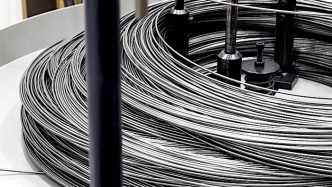