Exoplanets (planets outside our solar system) revolve around their host stars. They are quite hard to see directly through telescopes because they are blocked by the bright glare of the stars they orbit.

One such exoplanet is KELT-9b that orbits KELT-9 star (or HD 195689) within the constellation Cygnus. The star is located 650 light years away from Earth and it’s almost twice as hot as our Sun (with more than 10,000°C temperature).

This exoplanet revolves extremely close to its host star: nearly 30 times closer than the distance of Earth from the Sun. Due to this proximity, the exoplanet completes one revolution in 36 hours and is heated to over 4,000°C, which makes it hotter than many K-type stars and M-type stars.

Currently, we don’t know how its atmosphere looks like and how things can evolve under such extreme environments. To solve this puzzle, researchers at the University of Bern and the University of Geneva conducted a theoretical study on the KELT-9b atmosphere.

The simulations demonstrate that a large amount of molecules found on this planet exist in atomic form. The reason behind this is the planet’s ultra-high temperatures that make particle collide at extremely fast rates, breaking the bonds that hold them together.

Chemical Components In The Atmosphere

To precisely observe the planet, researchers used an instrument called spectrograph that splits light into a frequency spectrum and captures the signal through a camera. It observed KELT-9b as it was rotating in front of the KELT-9 star. 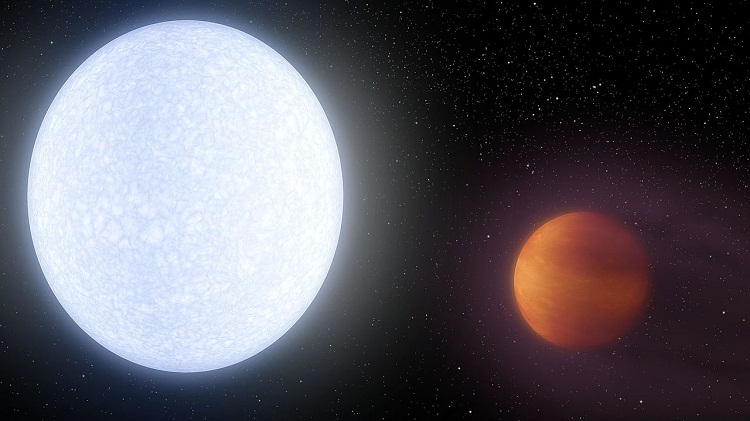 During transit, a small portion of the light from the star through the exoplanet’s atmosphere can be captured. By examining this filtered light, we can uncover the atmosphere’s chemical composition.

They used the HARPS spectrograph for the Northern hemisphere, installed in Telescopio Nazionale Galileo to analyze this filtered light. It’s a 3.58-meter telescope that utilizes transit photometry and Doppler spectroscopy to determine the mass and size of the exoplanet.

The team discovered a strong signal indicating the presence of iron vapor in the spectrum of the exoplanet. They also detected the sign of titanium in vapor form.

The study unveils the atmospheric characteristics of a new kind of an ultrahot Jupiter-like planet. Researchers believe that several exoplanets have already evaporated in such harsh conditions, but KELT-9b is massive enough to withstand complete evaporation. However, the intense stellar radiation strongly impacts its atmospheric properties.

This is a unique exoplanet to study how atmosphere evolves under intense stellar radiations. The observations confirmed that the extreme temperatures of KELT-9b break apart most molecules, including those containing titanium or iron, present in its atmosphere.

Whereas in cooler massive exoplanets, these molecules are usually hidden in the form of dust particles or gaseous oxides, which makes it very difficult to detect them.

The discovery of iron and titanium on KELT-9b sets the stage for future searchers of water in carbon monoxide in the near-infrared wavelengths. At such high temperatures, carbon monoxide is expected to be present in abundance. Detecting water would enable us to distinguish the carbon-rich and carbon-poor scenarios.

These prospects ensure that KELT-9b exoplanet will remain a crucial subject to study extrasolar atmospheric chemistry using both ground- and space-based telescopes. 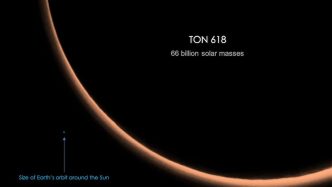 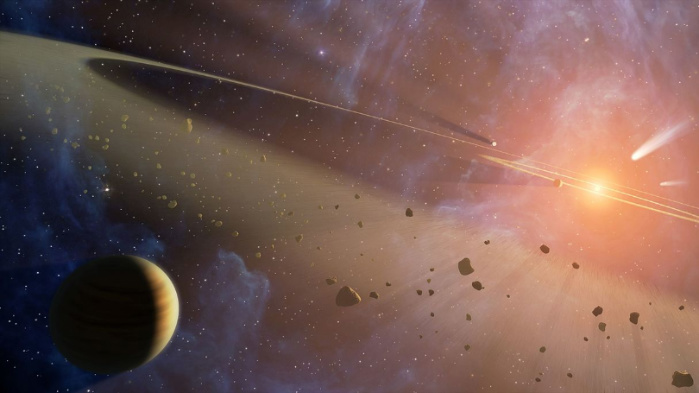