Android emulators are used by both gamers and developers. While Android gamers explore a bigger platform with extra hardware, developers use this utility to test their new applications before they are out in the market. Indeed, it is easier to play games as well as rigorously test your apps on a larger screen.

While gaming is, without a doubt, the most common reason for using an Android emulator, it can be used to emulate functions of other apps in the Play Store. Anyway, below is the list of best Android emulators that you can use on your desktop. 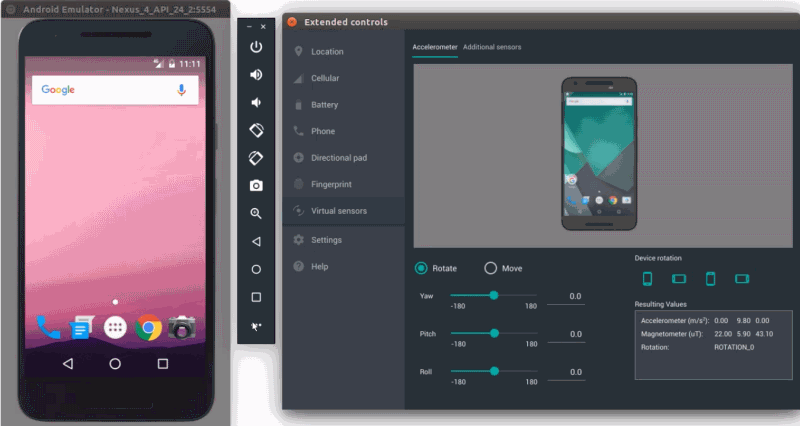 Android Studio, the official IDE for Android OS, comes with a built-in emulator. It is specially designed for developers who use it to test their newly developed apps actively. The emulator, unlike most others in this list, have relatively complex installation, and while it does wonders for developers, the same cannot be said for gamers.

Android Studio’s emulator is capable of performing almost every function of an actual device, from placing calls and text messages to simulating sensors and testing network speeds.

It comes with predefined parameters for multiple Android-based smartphones, tablets, and TV sets. Of course, you can access the Google Play Store.

YouWave is an old Android emulator, which might still get the job done for you. The free version is based on Android 4.0 (Ice Cream Sandwich), while the paid one supports slightly newer Android 5.1 (Lollipop).

Despite being heavily outdated, YouWave supports all basic functionality making it a reasonable choice for running old Android apps, plus the installation process is easy enough.

Its paid version, however, is highly discouraged. At nearly $30, Android Lollipop certainly does not provide the value for money. 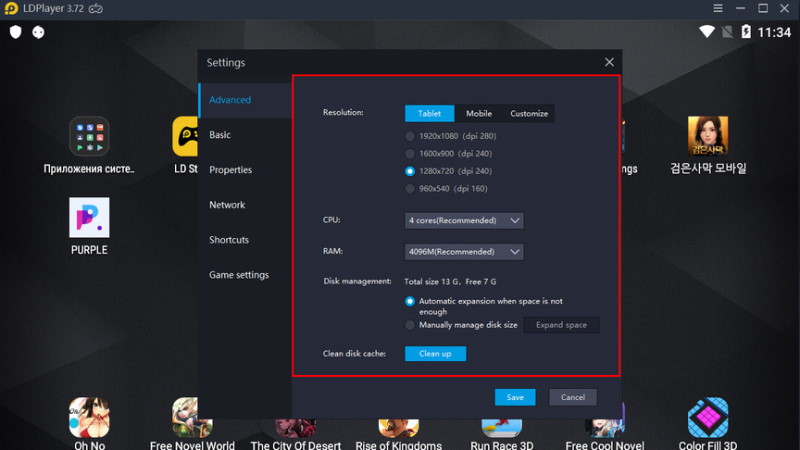 LDPlayer is another free emulator that you can use to play your favorite Android games on PC. It’s based on Android 5.1 Lollipop (API 22) and 7.1 Nougat (API 25). Though LDPlayer mainly focuses on games, it can be used to work with other sorts of Android apps.

The emulator accelerates in virtualization technology and keyboard mapping support, among other related elements. All in all, LDPlayer is an efficient emulator with a simple user interface and support for a fair amount of games. 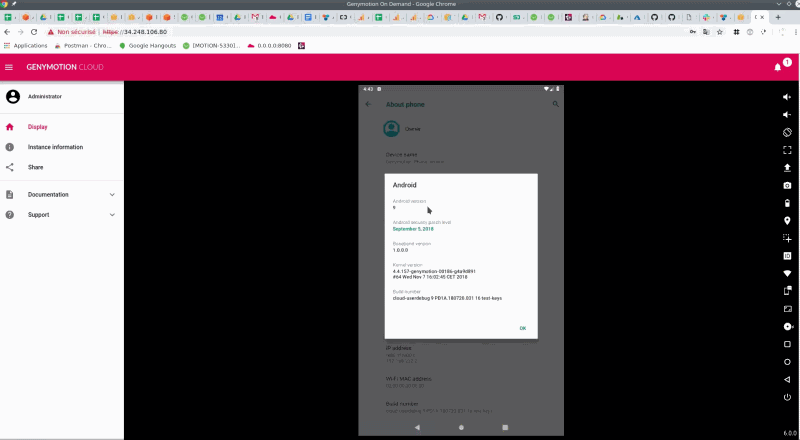 Price: Free/ various options
Pros: Available on the Cloud, tons of configuration
Cons: Not for average customers or gamers

Genymotion is not your average Android emulator. It is designed to cater the needs of Android developers by allowing them to test their apps on various devices virtually. Genymotion is available on desktop as well as on the cloud (platform).

Genymotion Cloud allows you to scale and manage your projects on their servers for greater flexibility. Those who have powerful machines at their disposal can use the desktop version, which can emulate more than three thousand configurations and settings. It is compatible with Android Studio and SDK tools. 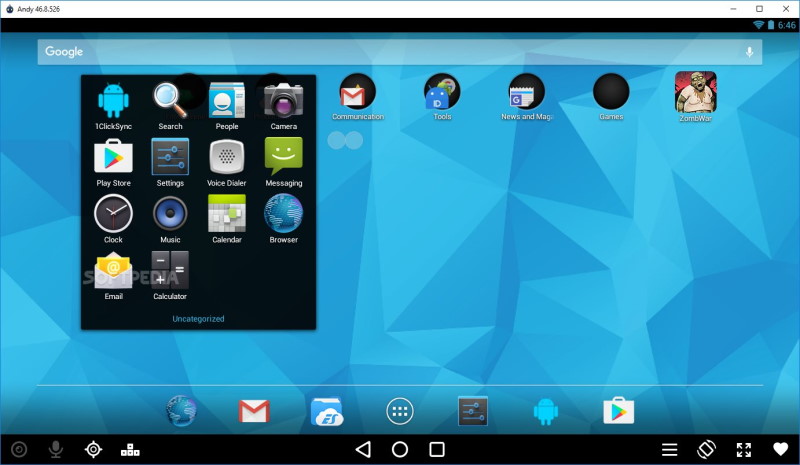 AndY, also known as Andyroid, is an exhaustive Android emulator in terms of available features as well as total size. The complete installation package is about 3 GB, though some of the programs that come with the installer are mostly unwanted.

The emulator gives you the option to use PlayStation and Xbox controllers as a gamepad along with your smartphone itself. It is also compatible with Mac. Overall, it’s an impressive tool.

What’s discouraging about AndY is its rather complex and time-taking installation process. Back in 2018, there were reports that the AndY was(/is) secretly mining cryptocurrency without the user’s consent. The issue was first reported on Reddit.

MEmu, officially MEmu Play, is a relatively new Android emulator, which is explicitly designed for gaming (though other apps can also be installed). If you are using KOPLAYER or some other emulator services and looking for a fresh alternative, then MEme Play is what you should try first.

The emulator is known for its compatibility as it supports both Nvidia and AMD chipsets. It can run on multiple Android versions, albeit they are all fairly old. 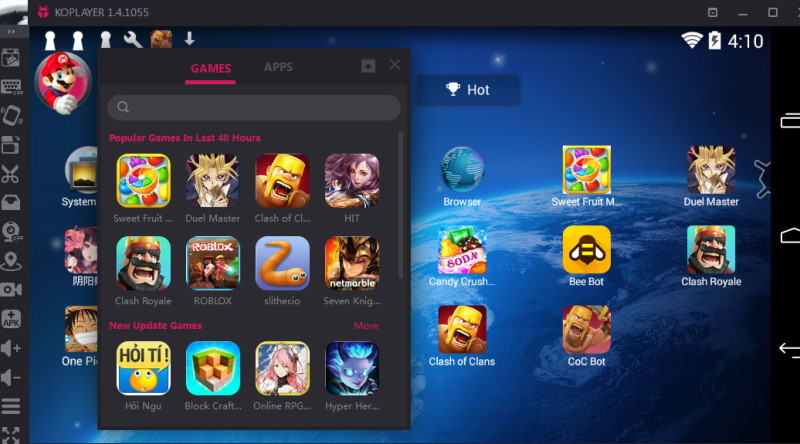 KOPLAYER has been there for quite some time now as a sensible choice as an Android emulator due to its flexibility and ease of use. It allows users to install apps either directly from Google Play Store or through APK files.

KOPLAYER gives you the freedom to use external hardware of your choice (i.e., keyboard, mouse, microphone, etc.) based on your need. There is an in-built video recorder that can be used to record gameplays for later use.

The biggest drawback of KOPLAYER is that it’s somewhat unreliable, while compatibility is also an issue sometimes. However, if you manage to run it on your system successfully, then you’re in luck. 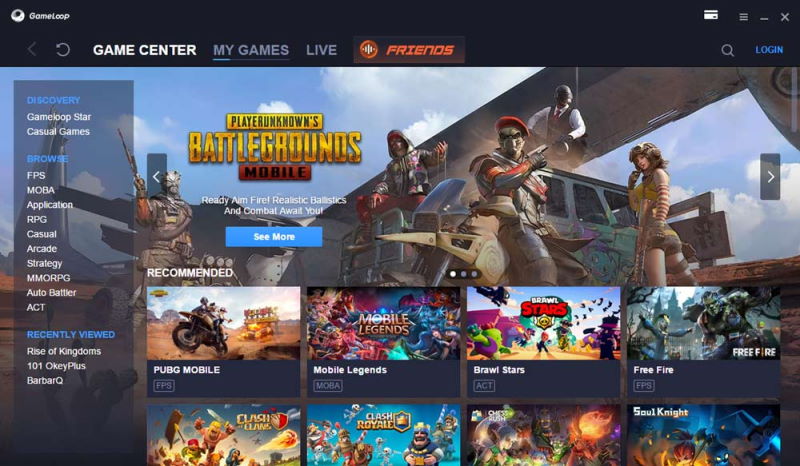 Earlier known as Tencent Gaming Buddy, Gameloop is one of the most popular android emulator used by gamers around the world. It’s bolder, more refined, as well as user-friendly. Tencent, the company behind popular games such as PUBG Mobile and Call of Duty: Mobile, recognizes GameLoop as its official game emulator.

It has a good collection of RPG and FPS games, though most of them are somewhat less known. Apart from the basic features, GameLoop application provides an anti-cheating system and turbo AOW engine for a better overall experience.

Gameloop, as the name suggests, is not suitable for app development and testing or for any other use for that matter. 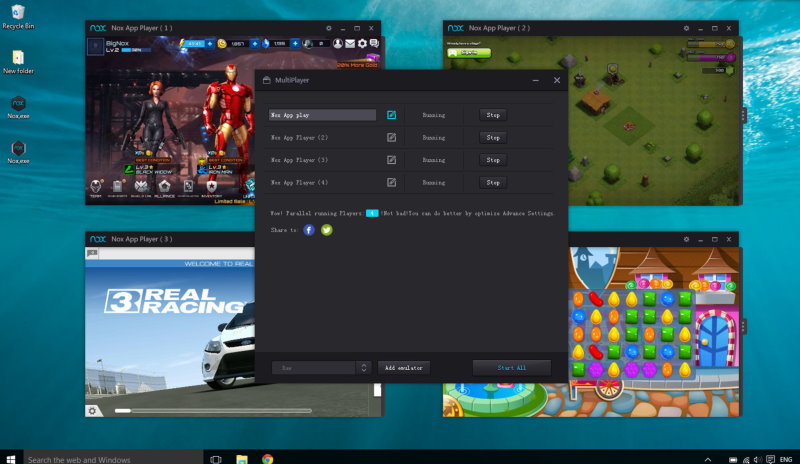 Nox is another free android emulator for both PC and Mac. It is reasonably fast as well as easy-to-use. Nox allows gamers to use their favorite keyboard or gamepad configuration by giving quick access to keyboard mapping. For instance, you can reassign or set the right move function to any key (alphabet) and freely use that during games.

Furthermore, Nox supports multi-instance with which you can run multiple emulations simultaneously, each using a different Android version. It also features a macro recorder and an option to install games (or apps) from APKs (outside Google Play). 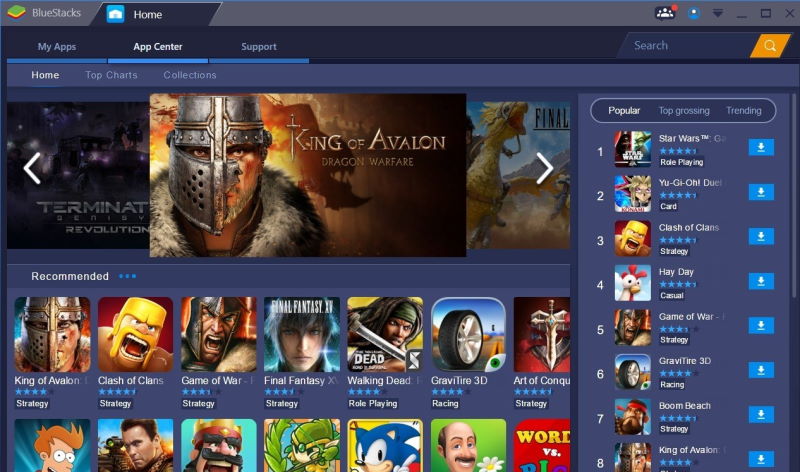 Price: Free,$2/month
Pros: Easy to use
Cons: Ads in the free version

BlueStacks App Player is, hands down, the best Android emulator that you can get. It is known for its features and reliability. BlueStacks is not only about good looks, but it’s ridiculously easy to set up and use as well. Both free and paid versions of the tool are available. The free version includes ads that, at some point, may feel annoying but are usually unobtrusive.

While you can browse and install popular Android games directly from the interface, it’s also possible to access Google Play Store for other applications. It can also execute APK files, in case you need to install games from outside sources.

Overall, BlueStacks is a powerful software capable of catering to all your Android gaming needs on the big screen. Its performance is somewhat based on the state of your hardware.

All the tools mentioned above are conventional Android emulators, explicitly designed to run Android applications on PCs. While they are adequate in what they do (some of them are exceptional), wouldn’t it be nice to know that there is another way to run your favorite Android games and apps on the desktop.

Since the arrival of Google Chromebook (in this case, Chrome OS), various similar operating systems have risen to popularity. With these OS, you can turn your computer into a large-sized Android device while keeping many of the features a PC.

One such Operating System is Phoenix OS, which, mostly focuses on games, but can also enhance your productivity. Prime OS is another candidate when it comes to an efficient Android gaming tool for PC. Bliss OS is another Android-based OS that you can try. Its most recent version, Bliss OS 12 (currently in beta phase), is based on Android 10.

Since they are full-fledged Operating systems and not just a single application, their installation might get trickier. But the major advantage is they all are free.

A slightly different application that allows you to run Android applications on your desktop is ARChron. It is a runtime application that works on any chrome enabled platform. Though I should warn you, getting it up and running is a time-consuming process.

How To Make Your Own Android Emulator?

If you’ve already tried most of them and feel they are not personalized enough or not catering to your specific needs (which is highly unlikely), there is a possible fix for that too. In such a case, you can make your very own emulator.

To begin with, you need to get an image file from Android-x86. From there on, it’s all about finding online guides and tutorials to help you through the installation process. Again, it’s imperative that you have a basic knowledge of the process, or else the end product is more likely to be flawed or buggy.

There are some emulators that could have made to the list if they are not either defunct or extremely outdated. One such tool was LeapDroid, which went dark after its creators were hired by Google. 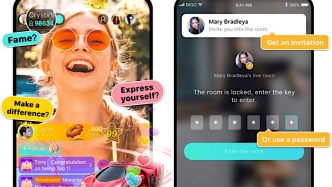