In physics, waves refer to disturbances in a medium carrying energy without a net movement of particles. The two most common types of waves are electromagnetic and mechanical waves. Both transmit information, energy, and momentum, but they do not transfer particles in the medium.

A mechanical wave is a vibration in matter, which transfers energy through a substance. However, an electromagnetic wave (such as light) can travel through a vacuum.

Mechanical waves can be further categorized based on the ways they propagate. The three propagation types are transverse, longitudinal, and surface waves. In this article, we will focus on longitudinal waves.

What are longitudinal waves?

In a longitudinal wave, particles move in a medium in the same dimension as the direction of movement of the wave. In other words, the displacement of the particle is parallel to the direction the wave is moving.

A simple example of such waves is compressions moving along a slinky. One can generate a longitudinal wave by pushing and pulling the slinky horizontally.

When traveling through a medium, these waves create compression and rarefaction.

As you can see in figure 1, compressions travel from left to right, and energy is transferred in the same direction. However, not even a single particle is transported along the longitudinal wave. Instead, they all move forward and backward between compression as the wave travels through a medium.

The distance between the centers of two consecutive regions (between compressions or rarefactions) determines the wavelength of the longitudinal wave. It can be produced in any medium, including solid, liquid, and gas.

To better explain this phenomenon, we have listed some of the best examples of longitudinal waves that people see in their everyday life. 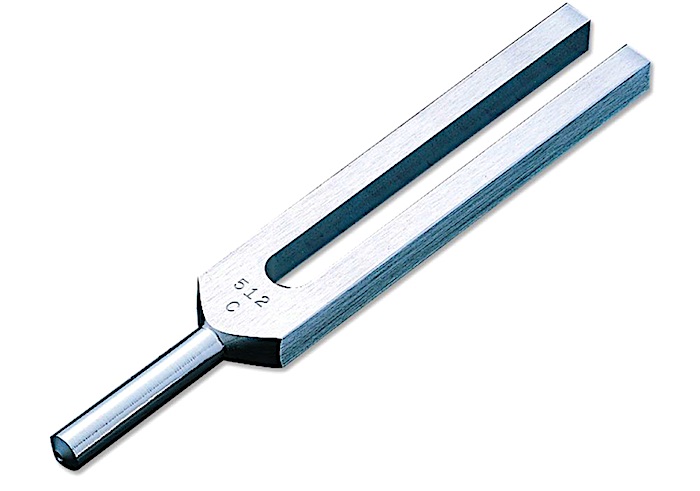 A tuning fork clearly illustrates how a vibrating object can generate sound. It contains a handle and two prongs made of elastic metal (generally steel). When you hit the tuning fork with a rubber hammer, its prongs start to vibrate, producing disturbances of nearby air molecules.

As long as prongs vibrate, they create an alternating pattern of high and low-pressure regions. These regions travel through the adjacent air molecules, carrying sound signals from one place to another. 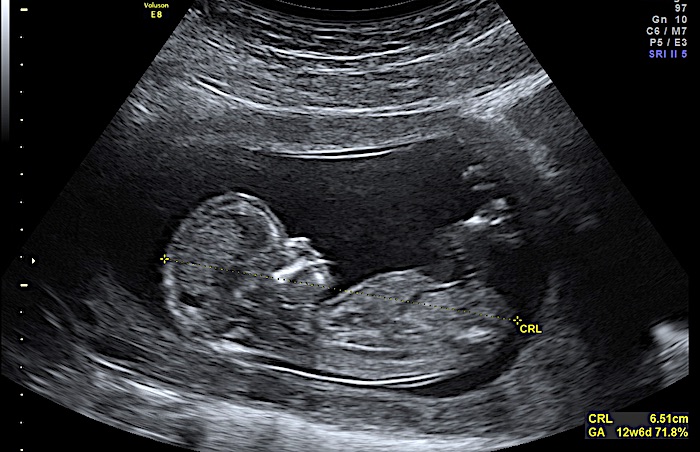 Sonogram of a fetus in the womb | Wikimedia

Sonography uses ultrasound waves to create images of internal body parts, such as blood vessels, muscles, joints, tendons, and internal organs. These sonograms (also called ultrasonic images) are formed by transferring ultrasound pulses into tissue using a probe. The pluses echo off tissues with distinct reflection characteristics and are processed and converted into a digital image.

Unlike other medical imaging techniques, ultrasound provides pictures in real-time. The instruments are portable, less expensive, and do not use harmful ionizing radiation. However, they offer a limited field of view and require a skilled operator.

7. Windows Shake When Thunder Strikes Nearby

During a thunderstorm, discharges of lightning produce powerful and fast pressure waves that propagate for very long distances. When these waves reach your office/home, they cause window panes to vibrate in the same manner our eardrum vibrates in response to sound waves.

Based on the attributes of the office/home and its windows (such as level of insulation, the structure of window frames, and thickness of glass), vibrating window panes can create their own distinctive noise. Most of the time, it sounds like rattling or buzzing.

Tsunami is not something that you see every day, but still, we have included this in our list to cover every aspect of longitudinal waves. Tsunami is very different from tidal waves: it is caused by an earthquake underwater.

Unlike typical ocean waves, tsunami waves are created when water moves under the influences of gravity and radiates across the ocean like ripples on a pond. While normal waves only involve the movements of the upper layers of the water, tsunami involves motions of the entire column from the seafloor to the surface.

As waves travel through the water, particles move in a circular pattern. The radius of these circles decreases as the depth into the water increases. This means, at the greater depth, water waves act as longitudinal waves. And near the surface, water waves behave as transverse waves.

Non-destructive testing is a wide range of examination techniques used in the science and tech industry to assess the properties of a system, component, or material without damaging it.

One of those frequently used techniques is ultrasonic testing, which relies on the propagation of ultrasound waves in the material or object being tested. Very short ultrasonic pulses with frequencies between 0.1 and 50 MHz are transmitted into components to find internal flaws or material properties.

Since ultrasound waves have high sensitivity and high penetrating power, they allow the detection of extremely small flaws hidden deep in the parts. The technique provides immediate results, so engineers can make spot decisions. It is mostly used on metal alloys and concrete. 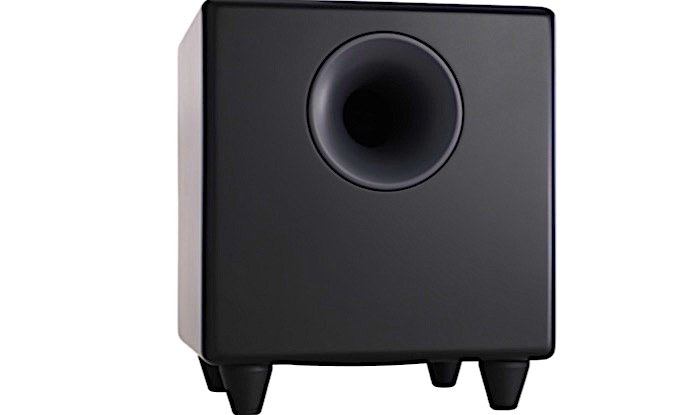 Subwoofers are designed to reproduce low-pitched audio frequencies ranging from 20 to 200 Hz for consumer products and less than 100 Hz for professional live audio systems. They are never used alone; instead, they augment the low-frequency range of speakers that cover higher frequency bands.

When you play a song, you can see small movements in the woofer cone. It actually moves in and out, and if you try to cover its mouth, you can feel the air pressure on your hand. That’s because woofers produce longitudinal waves by moving air particles in and out. 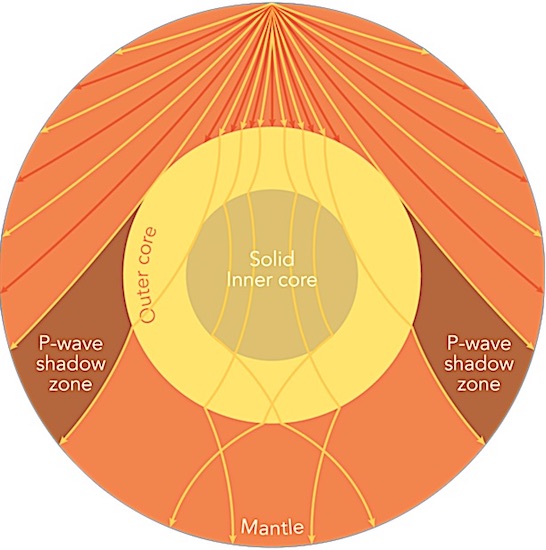 P waves (arrows in yellow) can penetrate through the mantle and core | Image credit: Byron Inouye

Primary waves (also called pressure waves) are longitudinal in nature. They travel faster than other waves (up to 8 km/s in Earth’s mantle and core, and 6 km/s in Earth’s crust) and thus are the first signals detected on seismographs.

P-waves can travel through solid rocks and fluids (liquid layers) of the Earth in a special pattern. Some animals can hear the P waves generated from an earthquake. Cats and dogs, for example, start acting strangely minutes before the earthquake. In contrast, humans can only sense the bump and rattle of these waves. 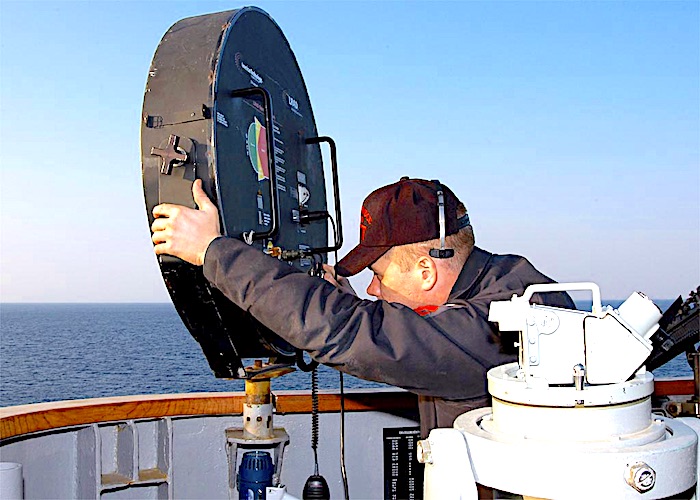 A Long-Range Acoustic Device on the USS Blue Ridge

Sonic weapons use high ultrasound frequencies to incapacitate, injure, or kill opponents. While they are used by military and police forces, several types of sonic weapons are currently in the research and development phase.

These weapons produce longitudinal sound waves that can cause humans to experience discomfort or nausea. They are often used to disperse protestors and rioters in crowd control efforts. 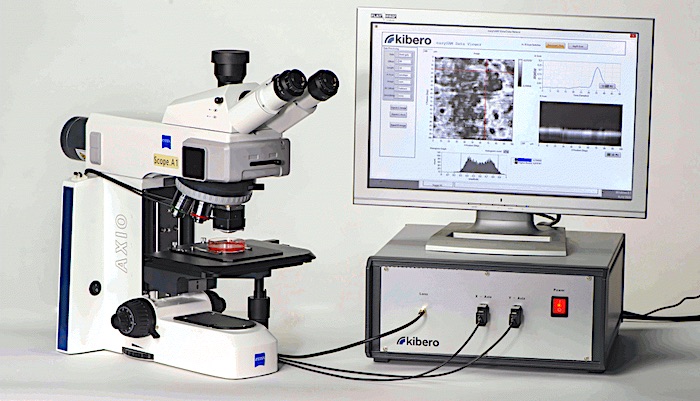 Acoustic microscopes can penetrate most solid materials, revealing their internal features such as cracks, voids, and delaminations. They operate in frequencies ranging from 10 MHz to 500 MHz.

Scanning acoustic microscopes, for example, are often used in biological and medical research. They provide data on the elasticity of tissues and cells, which gives invaluable information on the physical forces holding structures in specific positions and the mechanics of structures like the cytoskeleton.

Over the last decade, several acoustic microscopes based on picosecond ultrasonics systems have been demonstrated operating in GHz frequencies. They are increasingly being applied to nanostructures, quantum wells, as well as a single biological cell to probe its mechanical properties. 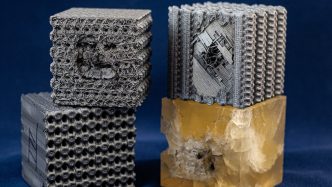 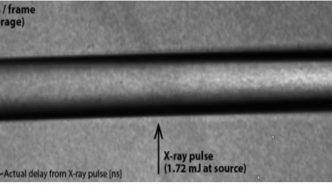 How Loud Sound Can Get Underwater?