If you’re looking for the best helicopter games/simulation out there, then you’re at the right place. Unlike airplanes (fixed-wing aircraft), helicopters are powered by rotors, which allows them to take off and land vertically. Other attributes such as hovering and lateral flying make them suitable for use in both urban and remote areas.

Before we can get started, let’s talk about the nature of the game first. There are two types of helicopter games available that you can play; military and civilian. While military helicopter simulations are more restricted in nature, many fans find them entertaining due to their mission styles and orientation.

Below is the list of the 15 best helicopter games that you can play right away. 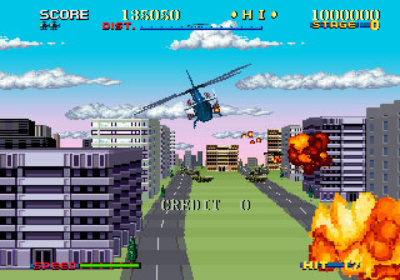 A still from the game

Sega’s Thunder Blade is perhaps the oldest combat flight simulator on this list. First released in 1987, more than three decades ago, the game remains somewhat relevant even now.

It is a third-person shooting game in which the player controls an armed helicopter with a single objective to destroy enemy buildings and military establishments. All levels are played in a top-down view. You can play it online. 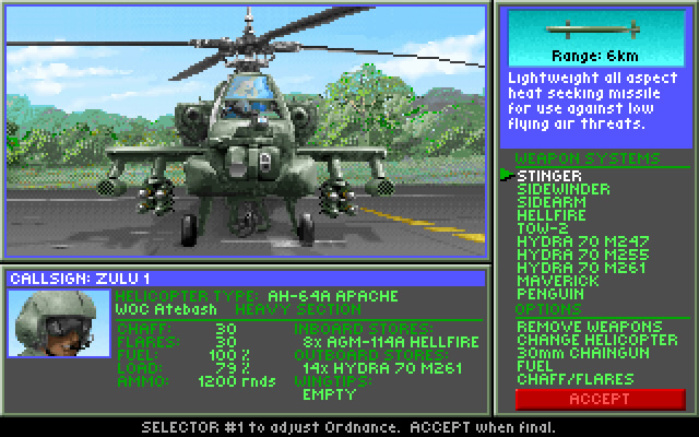 Initially released in 1991, Gunship 2000 is one of the oldest helicopter games/simulations you can play. It’s an enhanced version of its predecessor, the original Gunship game, released in 1986. The player begins the game by selecting a combat theater and then choosing between single or campaign missions.

During the initial stages, you have access to only one helicopter. This changes as you make progress in the game. The mid and late game is filled with several helicopters that will keep your interest alive.

The game also allows you to use various real-life military tactics based on terrains, such as nap-of-the-earth (low altitude flying) and pop attacks.

While the game has many flaws, including incorrect descriptions of helicopter models and flight avionics plus clumsy controls, a wide variety of weapons and various in-game features do somehow make up for it, given its age. 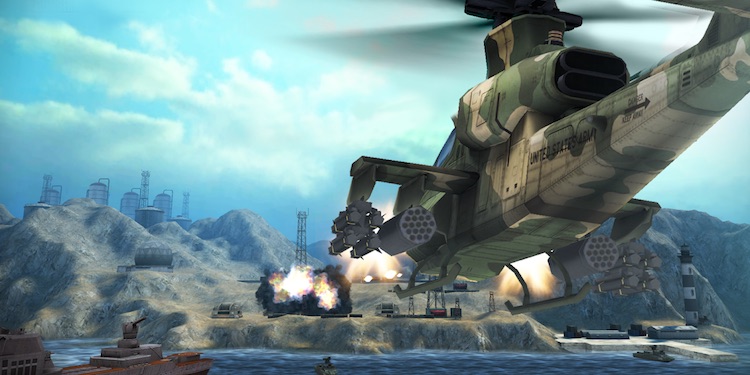 Virtual reality is taking the gaming industry by storm, and maybe it’s time to equip yourself with the right tools. Yes, I am talking about the VR setup.

Anyway, Gunship Battle2 VR is an immersive helicopter simulation game in which you play the role of a former secret agent/ pilot named Dylan. He lost everything, his family, and his identity after a covert mission went wrong.

But now, with the nation’s security at risk, and experimental gunship is his only hope to recover his grief and save the world. The game provides a complete VR experience. 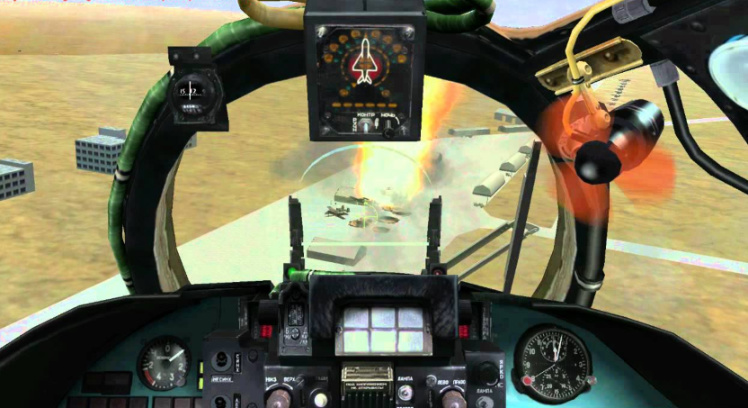 Enemy Engaged: Comanche vs. Hokum is one of the two original helicopter simulation games from the Enemy Engaged series. It’s a successor to Enemy Engaged: Apache vs. Havoc. For those who are wondering, Comanche and Hokum are NATO assigned call signs for American and Russian attack helicopters.

The game was praised for its artificial intelligence and great flight physics. It was also nominated for the “Simulation of the Year” award in 2000. 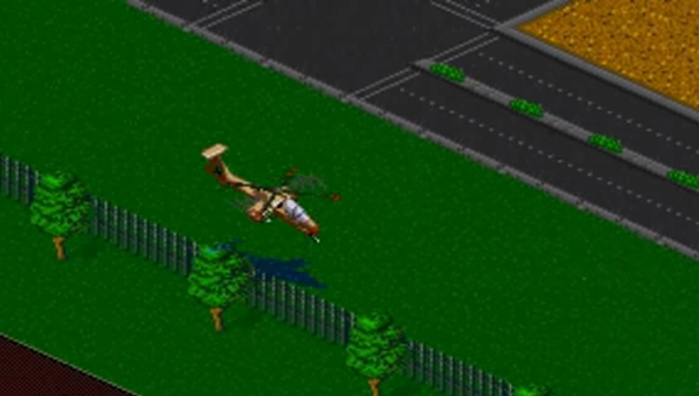 Jungle Strike is the direct sequel to one of the best-selling helicopter games, Desert Strike. While it’s a straight-out Shoot ’em up game, a considerable amount of strategy is also needed to be successful.

As a player, your main objective in this game is to stop enemy assaults with the help of an attack helicopter (Comanche) and occasionally a motorbike. Jungle Strike received worldwide acclaim for its superb design, flawless graphics, and controls. 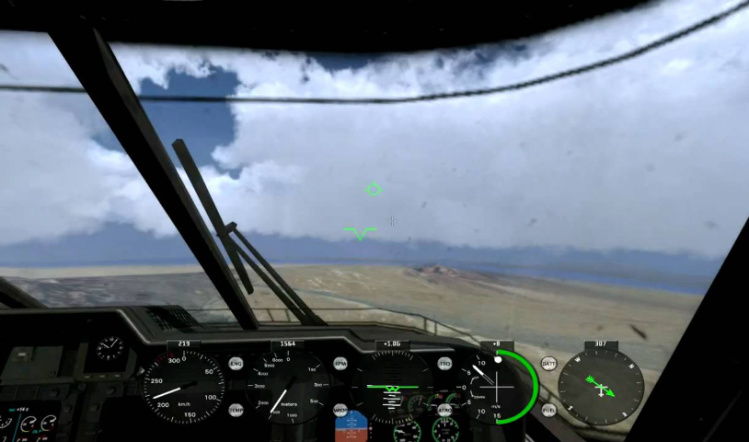 The story revolves around a Seattle-based business family (fictional) having a difficult time keeping their helicopter business afloat after the passing of their family head. As a player, you will take the role of Tom Larkin, a civilian pilot, and try to save the company with your brother Joe Larkin.

Overall the game is all rounded flight simulator, reasonably capable of entertaining gamers, especially those who are new to this genre. It also has a powerful mission editor. 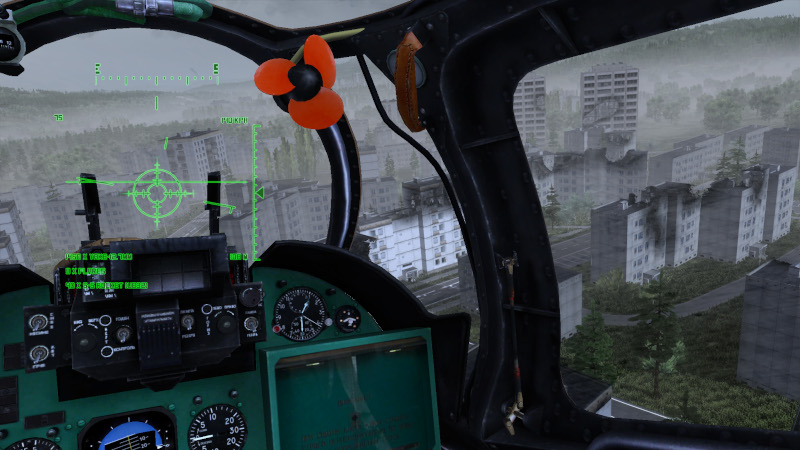 Air Missions: Hind is a recent combat flight simulator in which players take control of a Russian Mil Mi-24 attack helicopter, also known as ‘Hind’ or the “Flying Tank,” and conduct missions across different environments and scenarios. You can equip your helicopter with additional avionics (weapon systems) and missiles based on the mission type. They include real-life combat equipment such as MCLOS, SACLOS, machine guns, and a bunch of Soviet manufactured missiles.

The game has excellent graphics for an arcade-styled combat flight simulator. There are three game modes – test fly, instant action, and campaign, to accommodate both casual players and experienced ones. You also get a mission editor.

One of the major disappointments of the game is that it lacks depth. The maps in the game are small that are not ideal for exploration. Also, most missions are simple and may feel far from realistic. There are three DLCs that adds a few helicopter options to choose from. 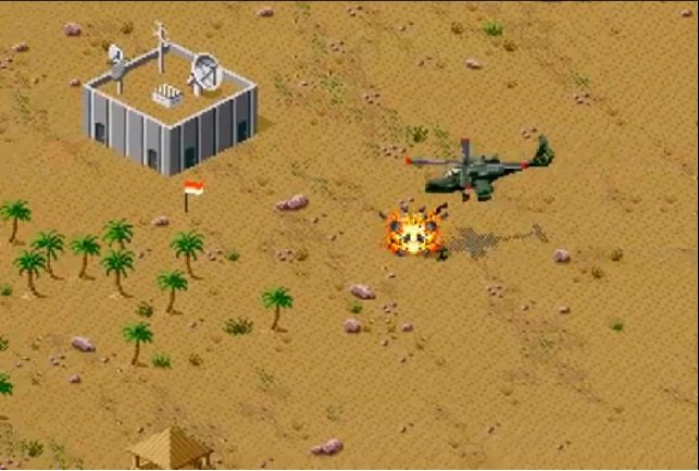 Desert Strike is a 90s popular single-player shooting game. Here the player takes control of an Apache helicopter and engages in various missions, from hostage rescue to attacking enemy installations on hostile grounds. The game took its inspiration from the Gulf War of the 90s and portrayed a battle between antagonist General Kilbaba and the United States.

The Apache is equipped with a machine gun and powerful missiles. While you can certainly add more powerful weapons, these additions can decrease the helicopter’s carrying potential, i.e., the more deadly the weapon, the fewer it can be carried. So a player must make appropriate weapon choices. 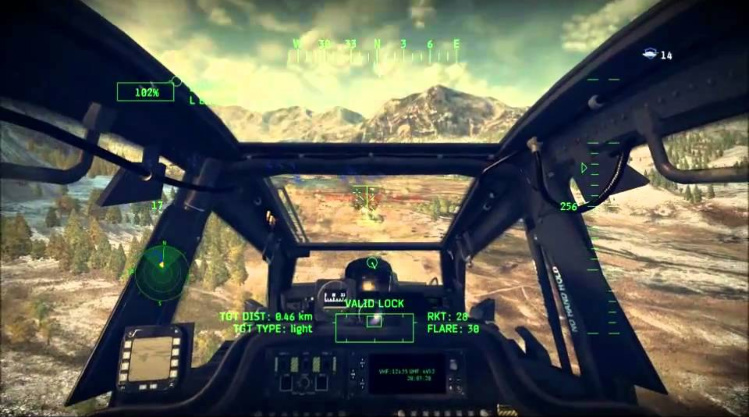 A still from Apache: Air Assault

Apache: Air Assault is a combat-style flight simulator featuring several customizable Apache helicopter variants. The core objective of this game is to try and stop various terrorist attacks (fictional) in unstable regions of the world. The game can be played in both single-player and multiplayer mode. Both IGN and GameSpot gave Apache a 7.5 out of 10. 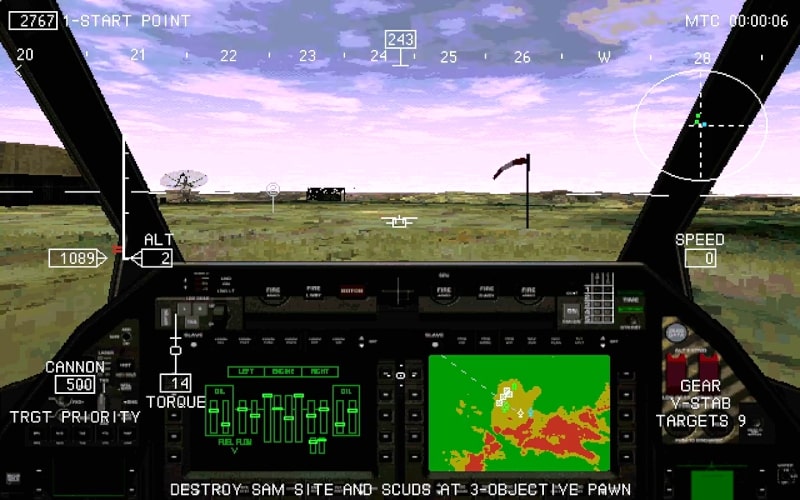 Another classic in this list, Comanche 3, is the third (sixth overall) installment of the acclaimed helicopter simulation game series, Comanche. The series is named after Boeing–Sikorsky RAH-66 Comanche, a canceled military helicopter program initiated by the U.S Army in 1991. It was the first-ever flight simulation game to use voxel technology, allowing it to have a more realistic and enhanced terrain than similar games at that time.

The game allows you to control and navigate a military helicopter through different terrains, engage with enemies, and complete a wide range of missions. The original game is spread across four campaigns with eight missions each (a total of 32 missions). There are also half-a-dozen of training missions that can help you get familiarized with the game.

A year after its original release, a much-upgraded version of the game was launched as Comanche 3 Gold. Apart from four original campaigns, the Gold version has five new ones with eight missions each. Moreover, it has several bonus missions under the ‘special operations’ tab, a mission editor, and new vehicles, including the Chinese Harbin Z-9 and AC-130U Spectre Gunship. 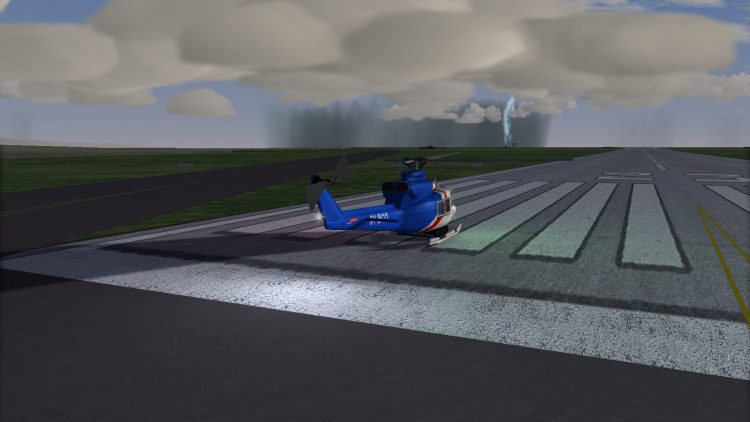 FlightGear is a free, open-source flight simulator. The project’s aim is to create a sophisticated flight simulator, which can be used for research or academic purposes. But the beauty of open-source software is that anybody can use it on Windows, Mac, Linux, and FreeBSD platforms.

The sim features over 20,000 real-world airports with accurate runway markings and elevations. You can start with a trainer helicopter, the Robinson R22, especially if you are a beginner. Then you can move to light utility helicopters such as The Alouette III. Then there is Sikorsky S-76C and Chinook CH-47, a twin-engine super heavy lifter for the experts. The only weakness that I can think of is its lack of a realistic virtual cockpit. 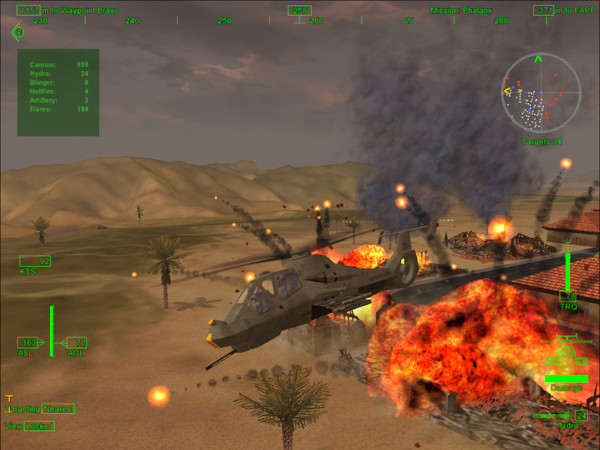 A still from Comanche 4 gameplay

Comanche 4 would have topped any list of the best helicopter games if we were in the early 2000s. It has everything you would want in a flight simulation game – engaging missions, better controls, and excellent overall gameplay. But for a game that was released in 2001, Comanche 4 surely is old and it’s evident from its far outdated graphics.

However, this should not prevent you from playing this classic, especially if you’re a hard-core fan of a military helicopter simulation game. Apart from outdated graphics, the game’s campaign mode is really short and can be completed within a few hours. But most missions are challenging enough to keep you engaged.

In terms of flight physics, both controls and movement of the helicopter is far from realistic (can be understandable) but it’s easy and fun to fly. 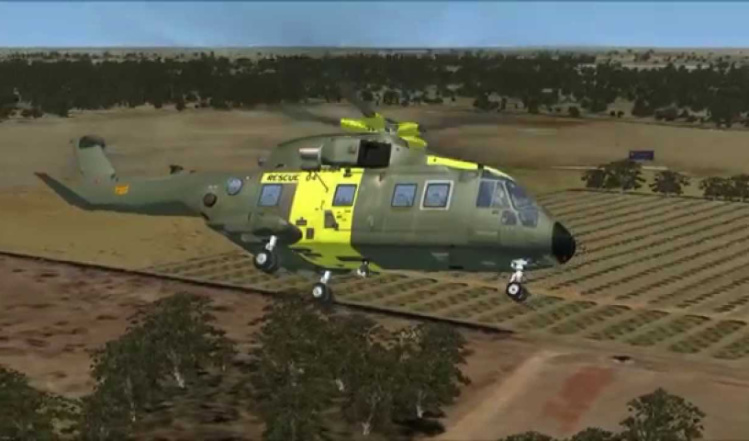 While the helicopter simulation on FSX might not be as accurate as you expected it to be, they are certainly worth your time. You can download many well-known helicopters from manufacturers such as Bell, Eurocopter, and Boeing. It’s available on Nemeth Designs and Hovercontrol. 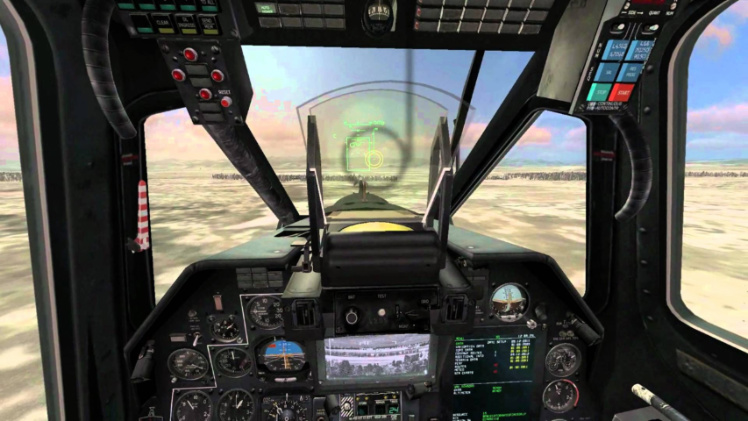 The sim includes advanced automation features, such as state of the art targeting system, guided missile system, mounted targeting, and autopilot. It allows pilots/players to convert the helicopter for different roles easily.

Apart from the Black Shark, you can also enjoy emulations of Mil-Mi-8MTV2, SA342 Gazelle, and UH-1H Huey after buying additional DCS modules. 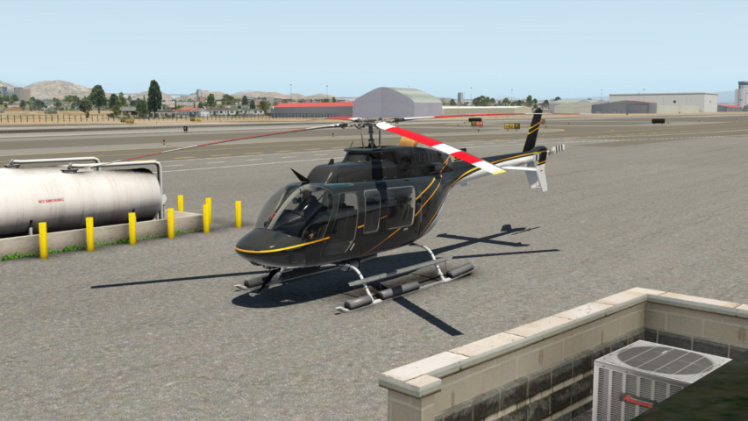 Laminar Research’s X-Plane is packed with numerous civilian as well as military class aircraft. One thing that separates X-plane from other sims is its revolutionary aerodynamic model known as the blade element theory.

Ordinarily, flight simulators emulate the performance of a real-world aircraft (drag and lift) with the help of predefined data. But those simulators are unable to emulate an aircraft performance where preset data are not available. On the other hand, X-Plane’s Blade element theory improves the simulation by individually evaluating every part of an aircraft.

Read: 15 Most Advanced Attack Helicopters Around the World

Furthermore, it features a unique plugin architecture that enables users to build their customized modules. It effectively extends the software’s functionality. 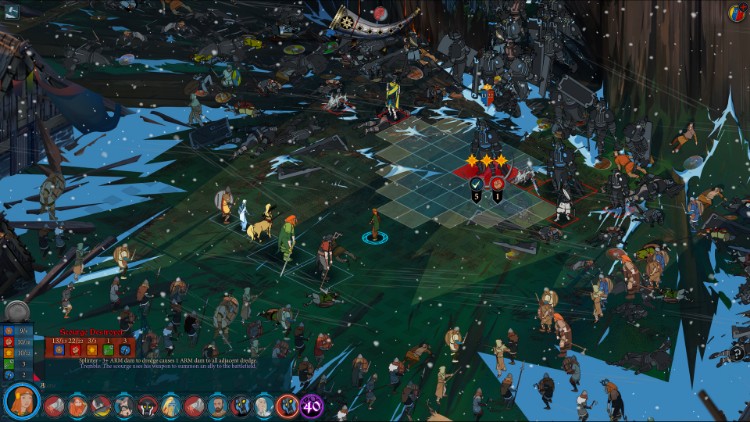 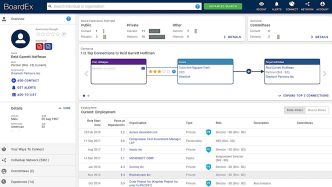