Today’s Machine learning (ML) is a lot different from the machine learning of the past. New computing technologies have changed the way it works (not the architecture it’s based on, i.e., learning from pattern recognition).

Although numerous ML algorithms have been around for a long time, the ability to carry out complex mathematical calculations in big data and deliver faster and more accurate results is a recent development.

The past couple of years were a good year for the freedom of information, as tech giants like Microsoft, Google, Amazon, Facebook, and even Baidu open-sourced a few of their ML frameworks.

Working within the ML landscape while using the right tools can be very helpful for developers who are trying to build a productive algorithm that taps into its power. We’ve gathered some of the best machine learning tools and resources of this year that will help you seamlessly integrate the power of ML into everyday tasks.

Plus Point: Comes with an easy to use graphical interface and runs on almost all modern computing platforms.

All these tools are available for free under GNU General Public License.

First, you need to use the data preprocessing tool to clean and optimize the data for further operations. Then, based on the type of machine learning model you aim to develop, you can select one of the options like Classify, Cluster, or Associate.

For each option, Weka offers the implementation of multiple algorithms. Choose the appropriate algorithm, set the required parameters, and execute it on the dataset. You can also use the visualization tool to analyze the data more carefully.

Furthermore, you can apply multiple models on the same dataset and compare their outputs.

Dimensionality Reduction with the Shogun

Plus Point: Developed with bioinformatics applications in mind and supports the use of pre-calculated kernels.

Shogun is an open-source machine-learning library written in C++. It provides a variety of data structures and algorithms for ML problems. It mainly focuses on kernel machines like support vector machines for classification and regression problems.

Shogun can process huge datasets containing 10 million samples. A vibrant user community worldwide is currently using this framework as a base for education and research and contributing to the package. 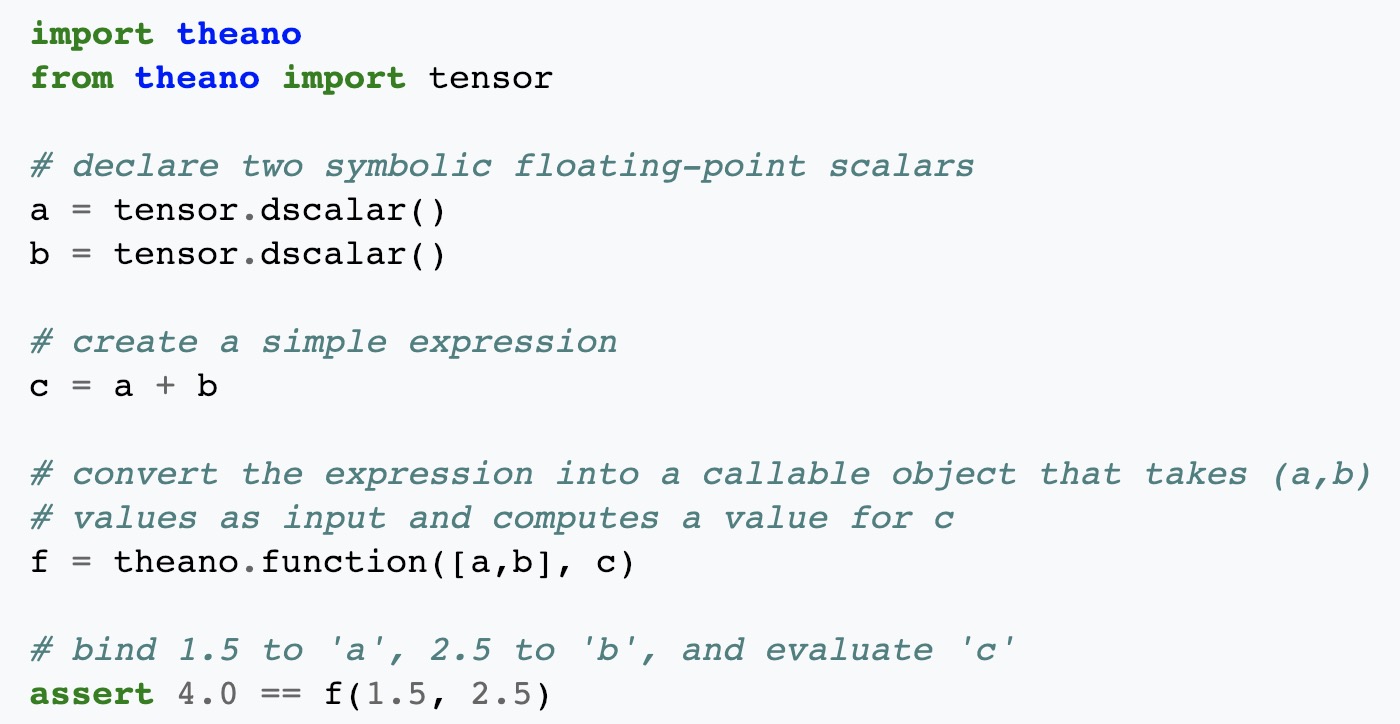 Initially released in 2007, Theano is an open-source Python library that helps you define, optimize, and evaluate mathematical expressions efficiently. It is primarily designed to handle tasks that require large neural network algorithms used in deep learning.

It takes your structures and transforms them into efficient code that uses NumPy, an efficient native library. It then compiles the code and runs it efficiently on either CPU or GPU architectures.

Theano applies a number of clever code optimizations (such as merge graphs, add canonicalization, reduce memory footprint) to extract the maximum performance from your hardware. 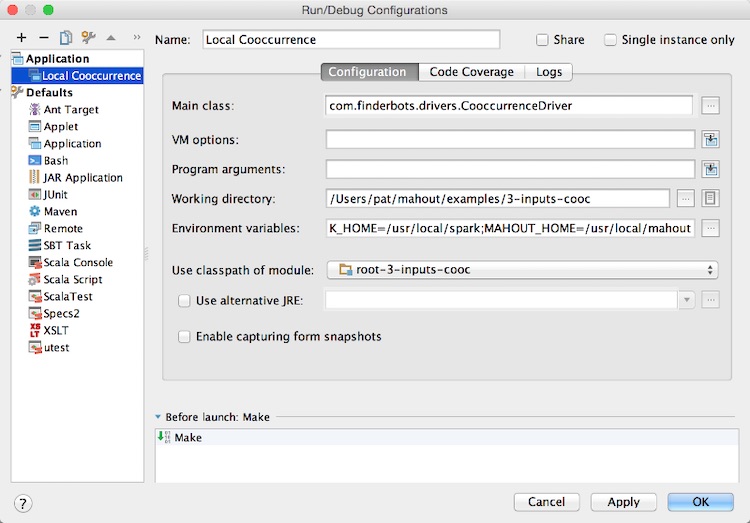 Plus Point: Best option for data scientists, statisticians, and mathematicians.

Several companies, such as Twitter, Yahoo, LinkedIn, Foursquare, and Facebook, are already using this framework internally. Yahoo uses Mahout for pattern mining, whereas Twitter uses it for user interest modeling. 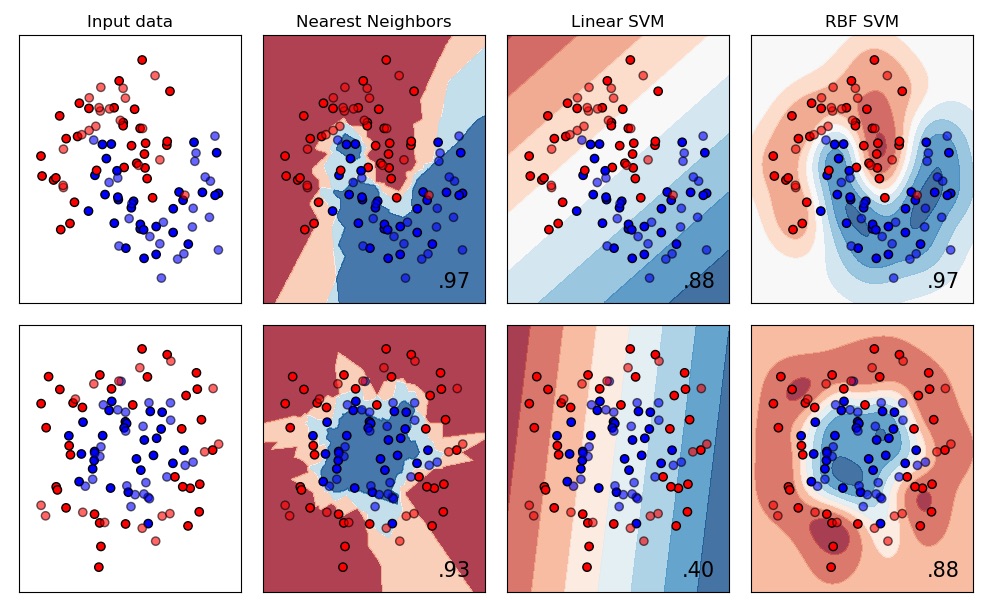 Plus Point: Relatively easy to use and comes with good tutorials and examples.

What started as a Google Summer of Code is now one of the most popular machine learning libraries for Python. It features a good selection of algorithms for classification, regression, clustering, model selection, and preprocessing.

If you love to code in Python, Scikit-learn is probably the best option among plain machine learning frameworks. However, if you are working on a large-scale project, we would recommend you consider other tools. 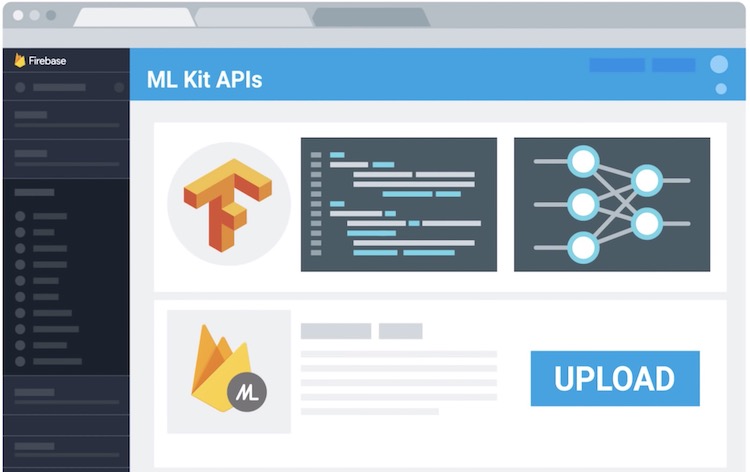 Plus Point: Offers the features that have long been experienced by Google on mobile.

It’s a machine learning framework built for mobile developers to create more engaging and personalized apps. You can use it for image labeling, text recognition, face detection, landmark detection, and barcode scanning.

Google will soon integrate a smart reply feature that will provide suggested text snippets based on context. If base APIs do not cover your use cases, you can always upload your own TensorFlow Lite models.

7. Gym And BaseLines by OpenAI

Plus Point: Supports teaching agents, everything from walking to playing games like pinball or pong.

More than 60 full-time researchers are currently working in the organization, and they frequently publish interesting papers on AI capabilities as well as open-source software tools.

So far, OpenAI has released six toolkits. The most popular among these are Gym and BaseLines, which are used for comparing, developing, and implementing reinforcement learning algorithms. 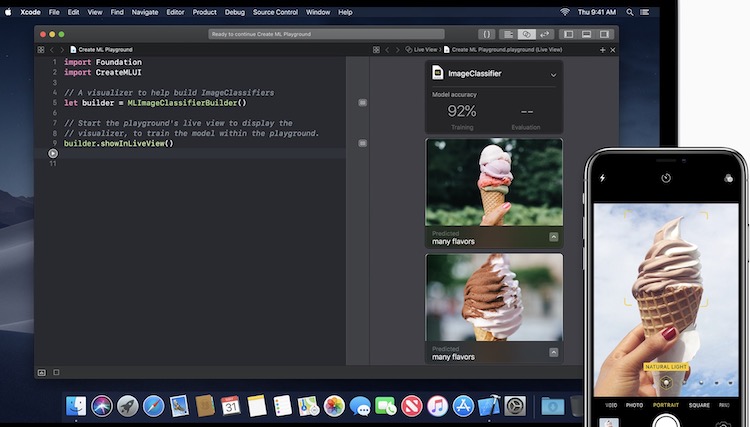 Plus Point: Optimized for on-device performance

Core ML offers a simple way to integrate trained machine learning models into macOS, iOS, and tvOS apps. All you need to do is drop the mlmodel file into your project, and Xcode will automatically create an Objective-C or Swift wrapper class, making it really easy to use the model.

Since the framework is built on top of low-level technologies like Metal and Accelerate, it can leverage both CPUs and GPUs to provide maximum performance.

Moreover, running models strictly on the device ensures privacy and guarantees that the application remains functional when you are not connected to the internet. 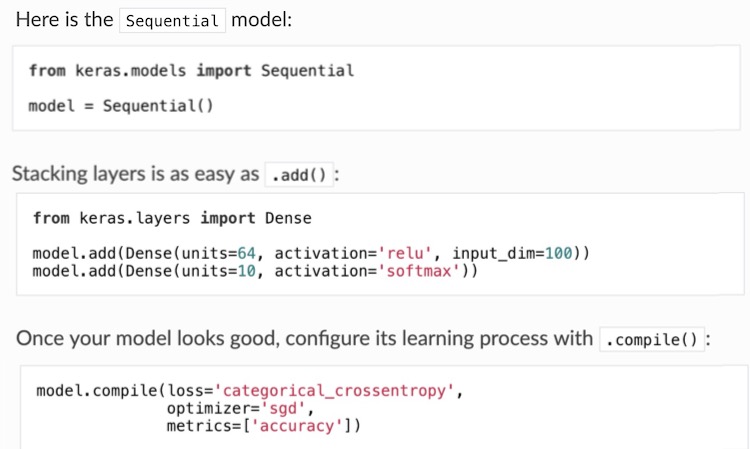 Plus Point: Sequential models only require a single line of code for one layer.

Each layer performs a specific task. Usually, they pass most of the compute-intensive operations to the backend, such as Microsoft Cognitive Toolkit or TensorFlow.

Plus Point: Scales to multiple GPUs across multiple hosts with 85% efficiency.

Adopted by Amazon as its primary deep learning framework on AWS, MXNet can scale almost linearly across several GPUs and servers. It is built to be distributed on dynamic cloud infrastructure via a distributed parameter server.

At present, this open-source deep learning framework is supported by Microsoft, Baidu, Intel, and several research institutions like the University of Washington and MIT.

Plus Point: Handles several neural network tasks faster and has an extensive set of APIs.

The Microsoft Cognitive Toolkit uses directed graphs to describe neural networks as a series of computational steps. This open-source framework is developed with sophisticated algorithms (core libraries are written in C++) and production readers to work reliably with large-scale datasets.

Moreover, the framework can implement stochastic gradient descent learning in parallel across multiple GPUs and machines and can fit even massive-scale models into GPU memory.

Plus Point: Perhaps the best option for projects that need to be up and running in a short time.

PyTorch is an open-source ML library for Python based on Caffe2 and Torch. It’s primarily developed by Facebook and mostly used for applications like natural language processing.

The two main feature it provides is Tensor computation with high GPU acceleration and Deep Neural Networks designed for maximum accuracy and flexibility.

It’s not Python binding into a monolithic C++ framework. PyTorch is developed to be integrated into Python so it can be used with popular packages and libraries like Numba and Cython. 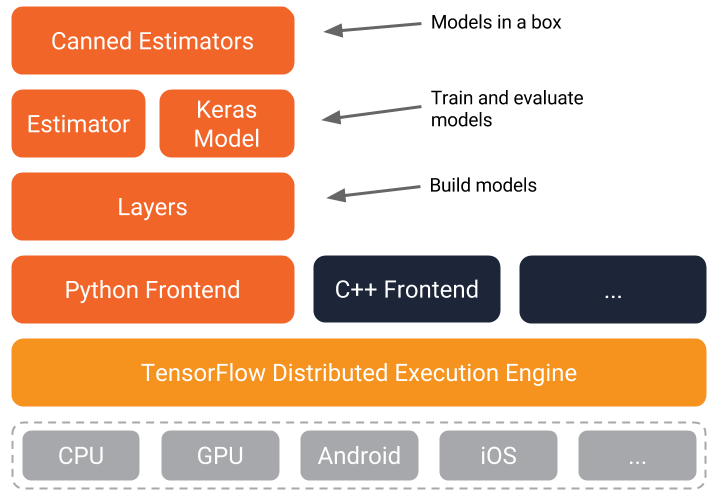 Plus Point: Provides abstraction while taking care of the details behind the scene.

Developed by Google Brain Team, TensorFlow is probably the best open-source library for complex computation and massive-scale machine learning. It utilizes Python to provide a handy front-end API for creating applications with the framework and implements all matrix multiplications in C++ to make computations fast.

Suppose you need to debug and gain introspection into TensorFlow applications. In that case, its ‘eager execution’ mode allows you to inspect and modify all graph operations individually rather than creating the whole graph as one object and inspecting it all at once.

There is also a TensorBoard visualization suite that gives you an interactive overview of how graphs run. And, of course, all these benefits come with the backing of Google, which has made several valuable offerings around TensorFlow over the last couple of years.

Written in Java, RapidMiner gives you an intuitive graphical user interface to design and execute analytical workflows. The free version is limited to 10,000 data rows and 1 logical processor.

More than 1 million professionals and 40,000 companies across the world have used this platform to bring data science and machine learning closer to their business.

Vertex AI makes it easier to build smart applications by uniting all Google Cloud services under one UI and API. It integrates with almost all popular open-source frameworks, including PyTorch, TensorFlow, and scikit-learn.

The platform comes with a drag-and-drop interface and several pre-trained models for ordinary tasks like object detection and product recognition. It also gives you the option to quickly infuse video, vision, translation, and machine learning models into existing applications. This saves you a lot of time.

As the name suggests, it’s an open-source neural network library for machine learning. It consists of sophisticated algorithms and tools to deal with regression, classification, association, and forecasting.

Since it is written in C++, it stands out in terms of memory allocation and execution speed. It can efficiently implement many layers of non-linear processing units for supervised learning.

KNIME integrates with the latest AI and machine learning techniques through its modular data pipelining “building blocks of analytics” concept.

The platform is built to make understanding data and developing workflows accessible to everyone. It comes with a drag-and-drop interface, so you can connect data, perform calculations, and develop interactive visualizations within minutes — without any coding skills.

Its core architecture enables the processing of massive volumes of data. Whether your project involves analyzing hundreds of millions of product descriptions or recognizing patterns in tens of millions of molecular structures, it has got you covered.

How many types of machine learning are there?

Machine learning can be categorized into three major groups —

1) Supervised: In this type of learning, algorithms are trained on a historical input and output. These algorithms gradually learn to predict outcomes based on the historical (test) dataset.

2) Unsupervised: In this type of learning, algorithms look for obvious patterns in data. They find relationships among data points in an abstract manner, with no input required from human beings.

Hierarchical clustering, Hidden Markov models, and Gaussian mixture models are the most common examples of unsupervised machine learning algorithms. They are used in network analysis, anomaly detection, and recommendation systems.

3) Reinforcement: In this type of learning, algorithms improve upon themselves and learn from new scenarios using a trial-and-error method. Good outputs are encouraged (reinforced) while bad ones are discouraged (punished).

What are some of the best datasets for machine learning research?

Thousands of machine learning datasets are available on the internet for free. The most popular ones are

According to the report published by Spherical Insights & Consulting, the global machine learning market size will exceed $302 billion by 2030, growing at a CAGR of over 38.1% from 2023 to 2030.

The major factor behind this growth includes the increasing adoption of artificial intelligence and machine learning technologies in various end-use industries like manufacturing, healthcare, retail, automotive, and business intelligence.

We thoroughly analyzed more than 30 machine learning resources available on the Internet. It took more than 20 hours to do the comprehensive research, after which we decided to shortlist the 17 tools based on their features and community support.

We DO NOT earn commission from any of the listed tools. Moreover, we have two separate editors who have no influence over our listing criteria or recommendations. 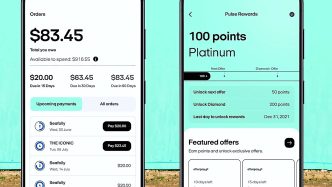 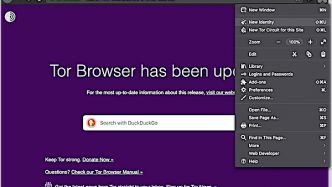