Introduced in 1994, PlayStation entirely changed the gaming industry. In less than a decade, it became the first digital platform to ship more than 100 million units.

About 7,900 games were released for the console over its lifespan. Some of them (like Jumping Flash, Ridge Racer, Tekken, Gran Turismo, Crash Bandicoot) became a part of our childhood memories.

We have gathered some of the best PS1 emulators that will let you relive those memories. All you need is a copy of the disc image, and even better if you have the original game disk.

Note: These emulators require the correct PlayStation console BIOS to run properly. You can copy it from your console to the memory card. 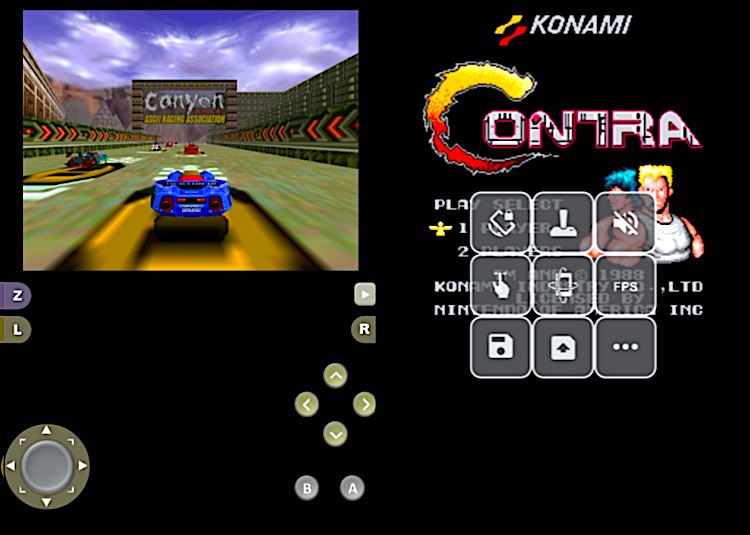 ClassicBoy utilizes the smartphone’s sensor to simulate D-pad and accurately adjust tilt parameters. It maps gestures into the game controller. A total of eight swipe patterns can be detected on each side of the screen, and each pattern can be mapped to a game button.

You can use the powerful layout editor to define the size and location of each button. The emulator supports key mapping for up to 4 players. 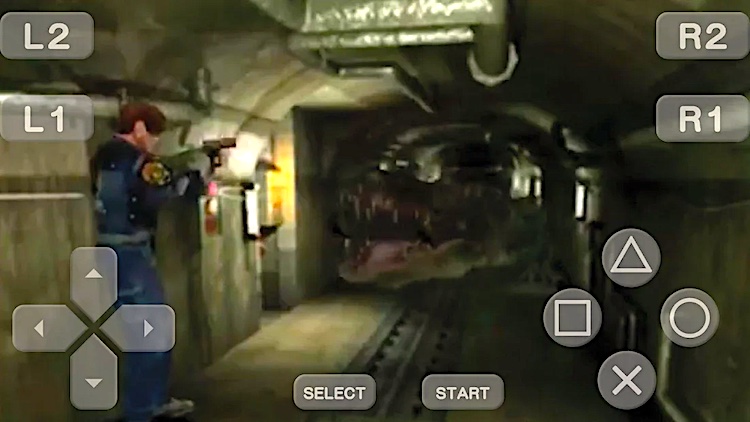 This is an easy-to-use emulator for Android devices. It allows you to play PS1 games with a virtual controller, which you can customize as per your priority. You can adjust the position and size of each button to suit your needs.

If you don’t want to rely on the touchscreen buttons, you can connect a keyboard or Bluetooth gamepad. Overall, you will experience smoother gameplay, visually stunning graphics, and superior sound quality to any other emulator on the PlayStore. 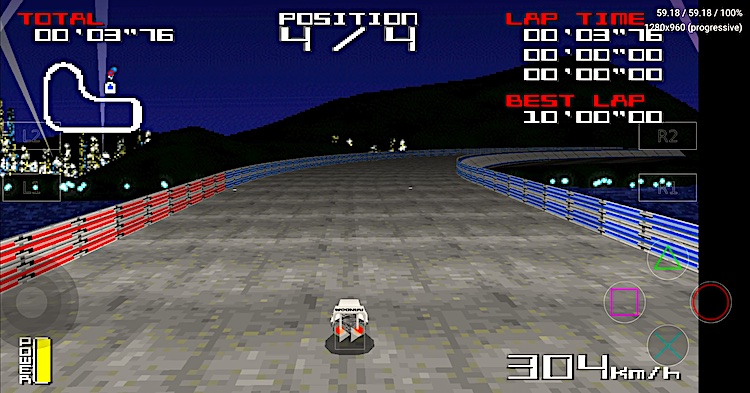 DuckStation focuses on playability, speed, and long-term maintainability. It aims to emulate the game as accurately as possible while maintaining high performance.

The app supports ISO, MDS, CHD, ECM, and unencrypted PBP game images. If you have games in other formats, you have to convert or re-dump them.

It supports both 64-bit x86 and 32-bit/64-bit ARM devices. However, the emulator won’t perform well on 32-bit ARM devices. You need to have at least a 1.5 GHz processor for decent performance. For high upscaling (more than 2x), you will need a mid-range device. 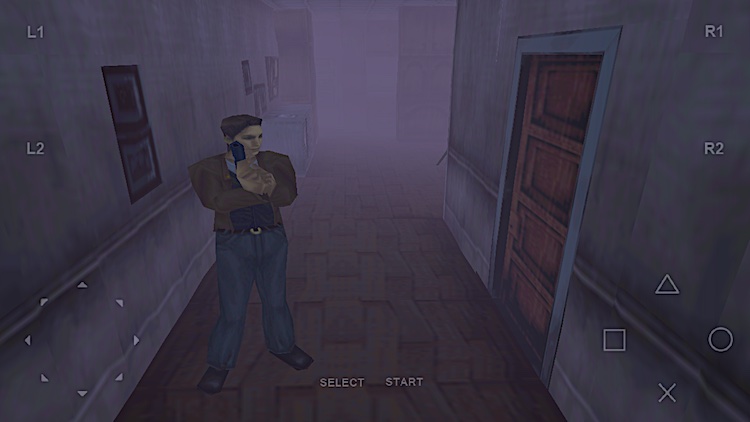 FPse is one of the fastest and smoothest-running PS1 emulators for Android devices. It uses OpenGL to display all games in high resolution.

The app scans your local storage automatically to find PS1 games. Once detected, it displays the covers of all the games stored on your phone. It’s recommended to load the bios to get better compatibility and to be able to use internal savestates.

There are three types of gamepads: digital pad, analog pad, and GunCon. The GunCon Button A and B are mapped to the top-left and bottom-left corner of the screen. It also supports force feedback. 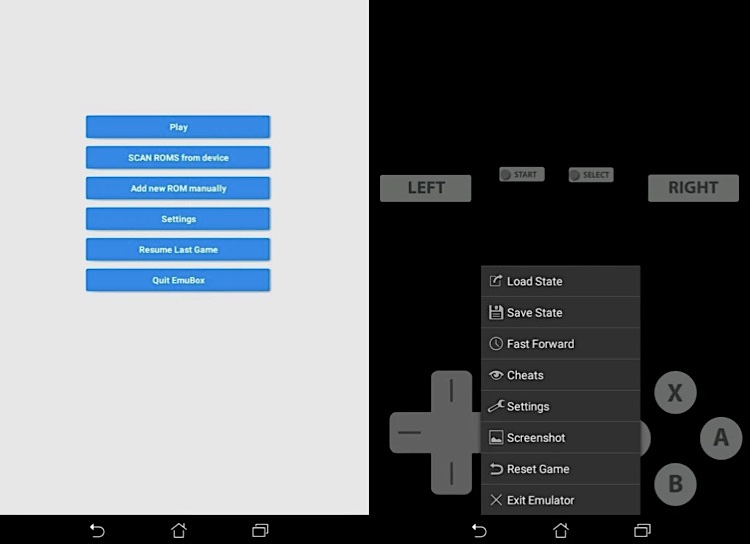 EmuBox is a completely free application that runs most old game ROMs on your Android devices. It supports a maximum of 20 save slots for each ROM and allows you to take screenshots while playing.

The emulator doesn’t restrict itself to the PS1. Instead, it supports many other consoles, including GBA, NES, and NDS. You can tweak the settings to optimize performance for each game. It also allows you to play with an external controller: either plug your gamepad in or connect a Bluetooth gamepad.

Moreover, the interface of the application looks intuitive and aesthetically pleasing. 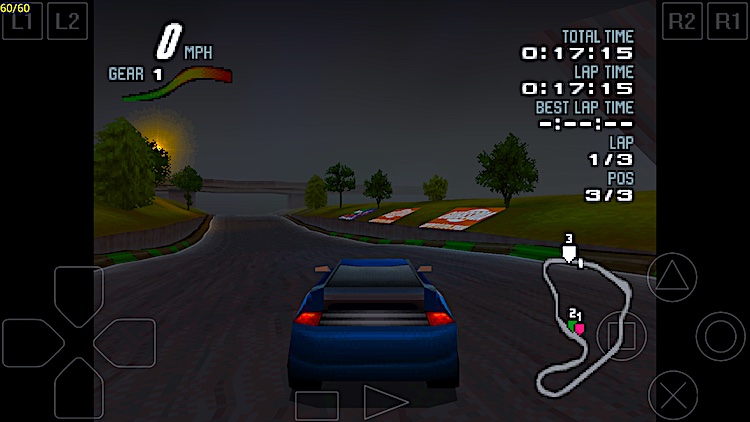 ePSXe (short for enhanced PSX emulator) lets your play PlayStation games on your PC and Android phone. It is fast, accurate, and highly compatible with a wide range of devices.

You can configure the program and start playing games in a matter of seconds. All you need to do is copy the BIOS file from your console, configure the controller, and choose the keys you want to use.

Most games run smoothly without much configuration and trial-by-error testing. However, if your game isn’t loading or you are experiencing lags, you can fix it by applying ePSXe patches (in .ppf format). 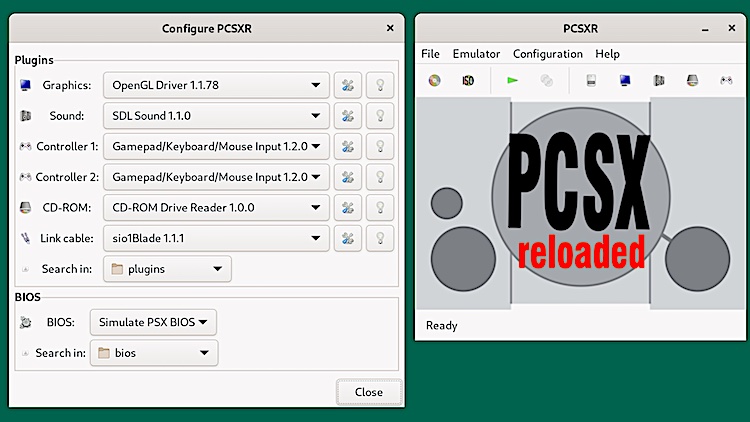 PCSX-Reloaded is a free and open-source emulator available under the GNU General Public License. It’s a forked version of the PCSX emulator, with a nicer interface and several improvements to functionality and stability.

It uses the PSEMU plugin interface to provide most of the functionality. Like most other emulators, it has a Save Rewind feature, savestates, and multi-track cue support.

It is the only PS1 emulator to have anti-jitter options in graphics plugins, such as enhanced coordinate accuracy in Edgbla’s gpuBladeSoft and GTE accuracy in the default Peops OpenGL plugin.

The emulator is integrated with an Internal HLE BIOS that runs many games without any issues. However, if you own a real PlayStation, you may prefer to use your own BIOS image. 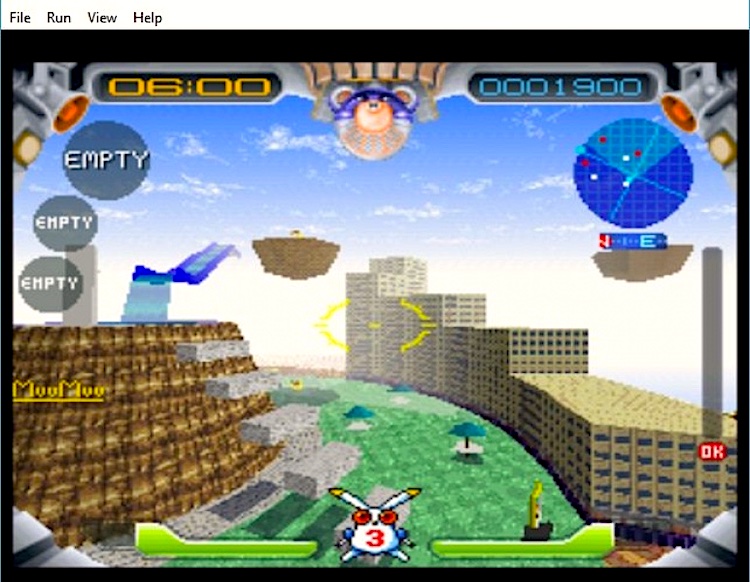 Xebra is generally used for accurate emulation at native resolution. It can be slow due to its accuracy, but it works with almost all models. In fact, it is the only PS1 emulator to include compatibility with PocketStation.

Unlike other emulators, it doesn’t work with cue images. It only runs Disc images containing all the game data in one file (such as .bin, .iso, or .img). However, you can covert the Cue images through the CUE2CCD tool. All you need to do is run CUE2CCD.exe and drag the cue image to the program’s window. It will give you a .img file of the game you want to run.

If the video gets distorted or audio gets crackly while running the game at full speed, try changing the default settings. 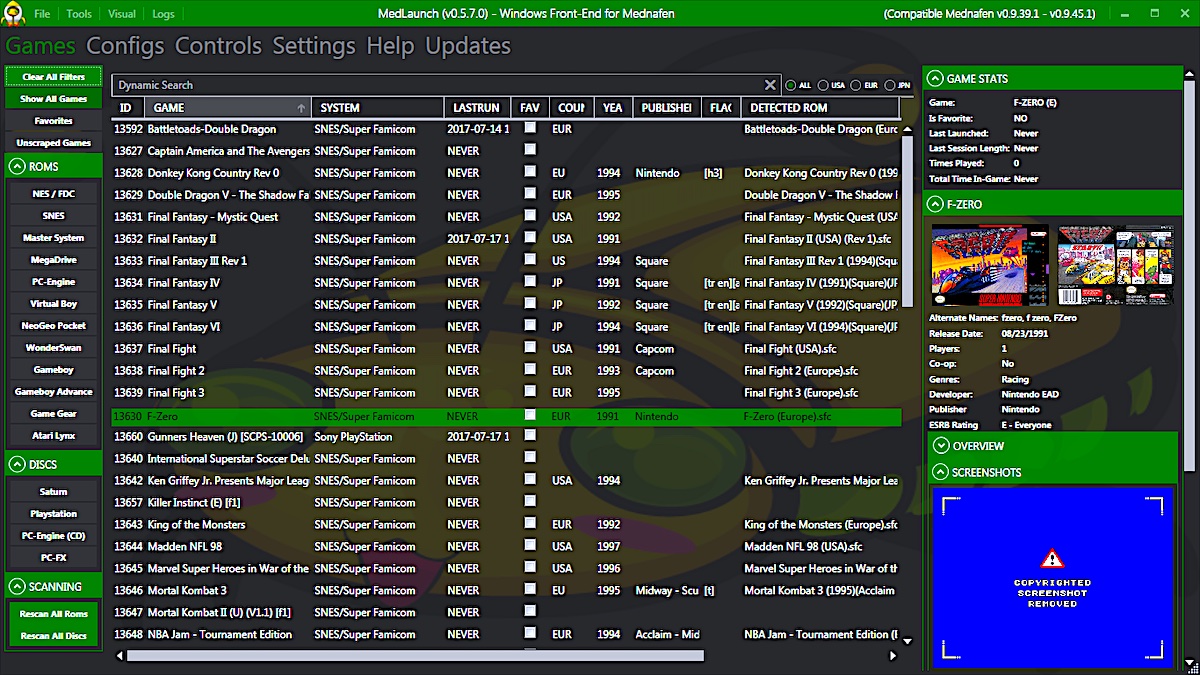 Mednafen is a multi-system emulator that utilizes OpenGL and SDL to run games. It can remap hotkey functions and virtual system inputs to a joystick or a keyboard, or both simultaneously.

The emulator supports real-time game rewinding and multiple save states. You can capture screenshots at the press of a button. All images will be stored in the PNG file format.

While most of the Mednafen’s cores are ports of the other applications, some of them are also original. Its original cores (built to run PS1, Sega Saturn, and Nintendo Virtual Boy games) are notable for their high quality, accuracy, and compatibility.

Mednafen has a simple-to-use command-line interface. However, to make configuration even easier, it supports several third-party GUIs. MedLaunch, for example, allows you to configure controllers and includes a dynamic games library with DAT file lookup and online scraping. 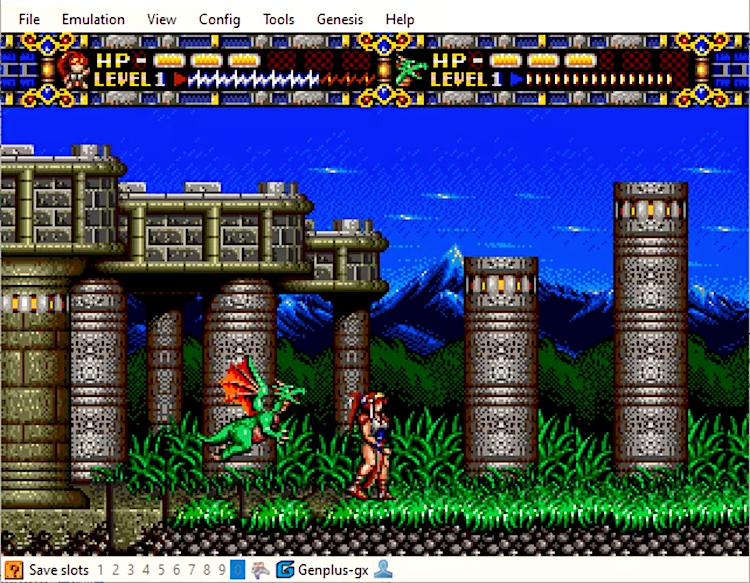 BizHawk is an open-source multi-system emulator that is capable of running games from a large number of classic consoles. It is packed with many tools for speedruns and emulation testing. It also integrates its own in-game audio and video recording option.

What makes BizHawk unique is it allows you to slow down or even pause the emulation to advance it frame by frame. This kind of debugging system lets you analyze the emulation to the millimeter and get the most from the video game emulation to beat time records or high scores.

Read: 12 Best Wii Games For Both Kids And Adults 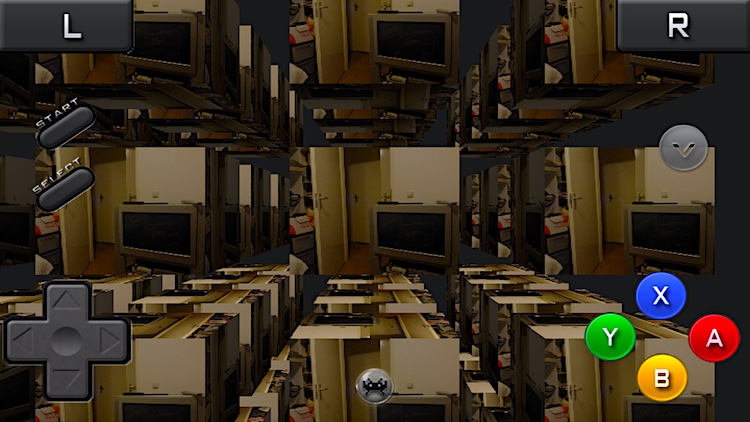 RetroArch is a frontend for game engines and emulators that allows you to run classic games on various devices and consoles through its intuitive graphical interface. It is the reference implementation of the Libretro API, which is built to be lightweight, fast, and portable without dependencies.

RetroArch comes with its own built-in collection of games and apps to provide you with a ‘one-stop shop for entertainment. It has been praised for the number of games it can play under a single interface.

Unlike other emulators, RetroArch is integrated with many advanced features, such as Dynamic Rate Control to synchronize video and audio, lossless video recording, frame-by-frame gameplay rewinding, and low input and audio lag options.

What exactly is an emulator?

A video game console emulator, for example, allows you to play console games on your computer and smartphone. Some advanced emulators are built with additional features to surpass the limitations of the original hardware, such as high video quality, better performance, broader controller compatibility, and one-click cheat codes.

No. Emulators are completely legal, and game owners can create backup copies of their games. However, it is illegal to download or distribute copies of games/applications (in any format) on the Internet. If you have purchased the game, you can make a copy for yourself only.

Is there a PS1 emulator for iPhone?

Yes. Many emulators have been designed for iPhone and iPad too. One such emulator is Provenance. It allows you to play PS1, Nintendo, and Sega games on an iPhone, iPad, or iPod touch. It supports full-speed emulation, local multiplayer via external controllers, and portrait and landscape orientation. 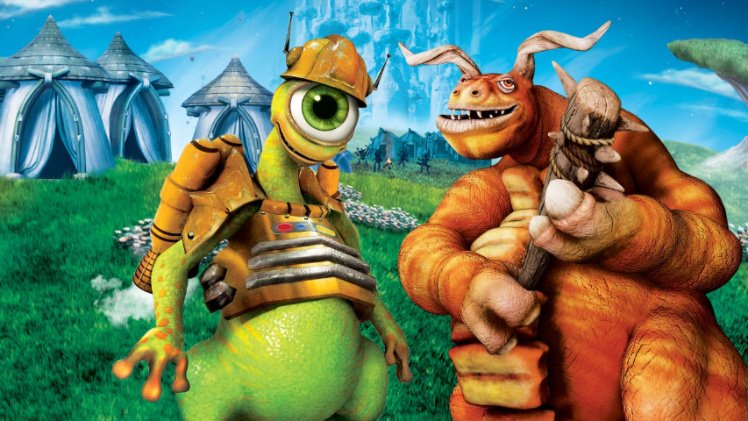 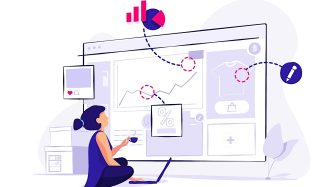 13 Shopify Competitors And Alternatives In 2023