Skyrim Followers | 10 Best Companions To Have By Your Side

As you navigate the mythical world of Skyrim, exploring dungeons and fighting off wildlife, there are a bunch of NPCs that can accompany you as your ally. Such NPCs, popularly known as ‘Skyrim followers,’ have varying characteristics and personalities, which they utilize to help players with their quests.

They perform a wide range of tasks that includes carrying equipment, picking locks, and attacking other NPCs. Each NPC follower has specific strengths and weakness that heavily influences a player’s preference. But there is no doubt that some followers are better, more useful than the others.

A follower can be either be permanent or temporary. Permanent followers become available for the rest of the game after you complete a quest, while temporary ones will only follow you for the duration of a specific quest. Depending on the type of quest the player character is on, they may abandon the previous follower and search for a new one.

You can also have non-humanoid followers such as dogs, steadfast Dwarven spiders, rieklings, and armored trolls. While there are players who like to go solo and you can definitely do the same, here is a list of best Skyrim followers for those who have different ideas. 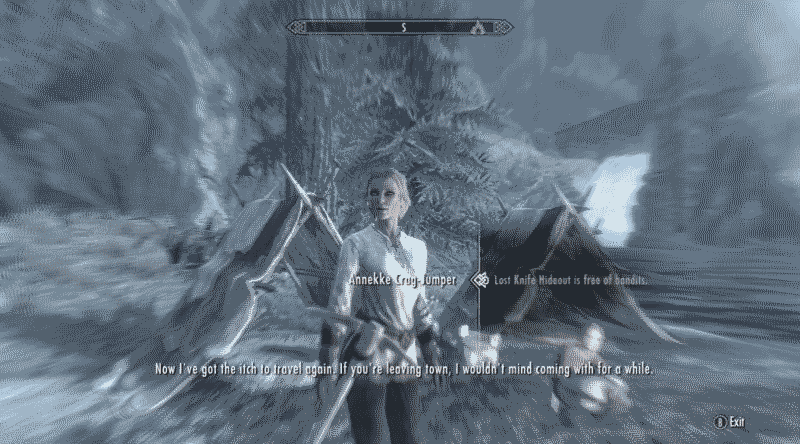 Annekke Crag-Jumper is a more than a decent follower in Skyrim. She is an exceptional archer, and when equipped with a powerful bow, her superior long-ranged attacks can help you against powerful opponents.

Apart from archery, her skills in Light Armor, one-handed combat, and block are better than the most. As a bonus, since Annekke’s default gear is miner’s clothes, she will wear any armor given to her. Players who favor stealth during the missions should avoid her.

Annekke becomes a potential follower after completing a radiant quest. 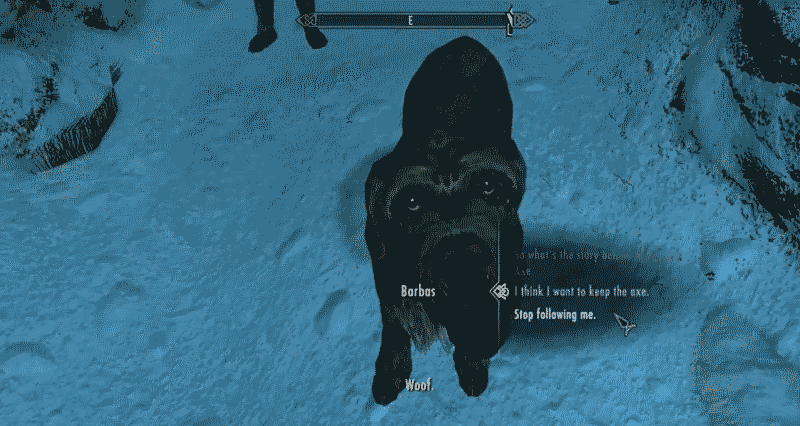 Barbas is a supernatural creature who often takes the form of a large hunting dog or a hound. Though temporary, he is one of the two potential dog followers in the game (the other one is Meeko). The Dragonborn encounters Barbas during the quest ‘A Daedra’s Best Friend,’ just outside Falkreath.

He is a loyal companion of a powerful Daedric prince (a skaafin), known as Clavicus Vile, and is believed to possess about half of Vile’s powers.

Barbas is unkillable (except by the Rueful ax) and will never back down from a fight. His one bite is powerful enough to kill a weak enemy, while he can also act as a decoy against powerful ones. Barbas will leave the Dragonborn after the quest ‘A Daedra’s Best Friend.’ 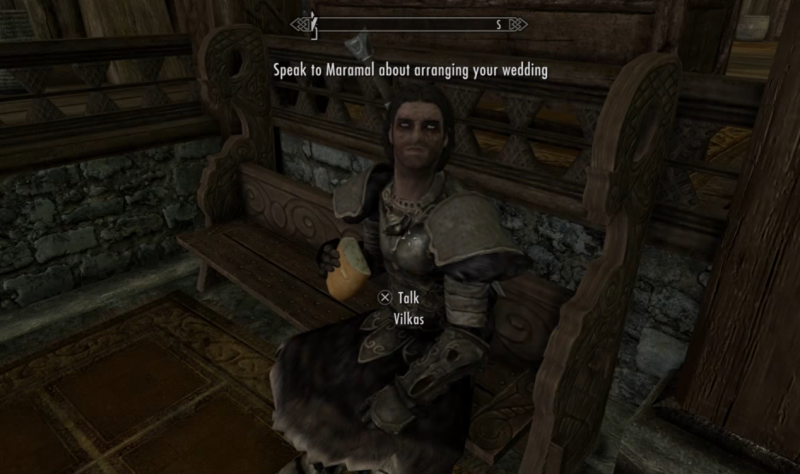 Vilkas is a Nord warrior and one of the most dominant Skyrim followers. He is a master trainer in the two-handed skill and wields a banded iron shield and a sword. Like most Nord warriors, Vilkas is a bruiser and absorbs a lot of damage head-on.

Vilkas’ twin brother, Farkas, has similar stats and abilities. They are among the most elite and respected members of the Companions and have a unique ability to transform into werewolves.

How To Recruit Them? – Both Vilkas and Farkas can be found at Jorrvaskr, the headquarters of Companions in Whiterun. They become potential followers after you complete the Companions questline.

Occasionally, you may find Farkas annoyingly chasing and engaging in dialogue with the Dragonborn after spotting him. It happens when the player has a high unpaid bounty in one or more holds (Farkas is a member of Guard faction). 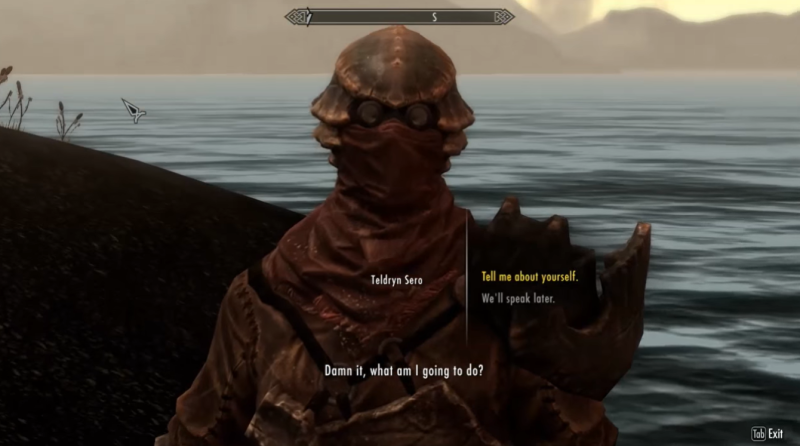 Teldryn Sero, introduced in the Dragonborn expansion, is not your average follower. A Dunmer (dark elves) and mercenary by profession, Teldryn Sero is proficient in spells and one-handed combat (spellsword). He is the only follower with Armsman perk (60 percent more damage with single-handed weapons).

During combat, his first move is usually to conjure a Flame Atronach and then switch between sword attack and firebolt damage. He caries a chitin armor, an elven dagger, and a sword.

Teldryn Sero is found in Raven Rock’s Retching Netch club and can be hired as a follower (for 500 gold). 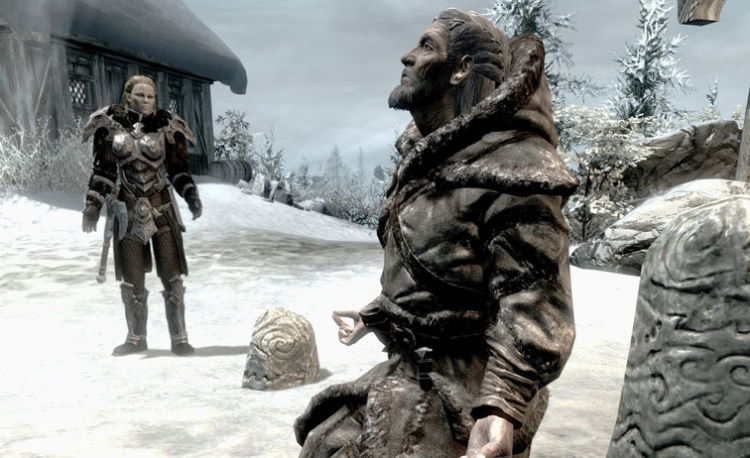 She is one of the four NPCs introduced in the Dragonborn expansion (alongside Teldryn Sero). Frea is a Nord warrior and shaman, who intends to free the people of skaal from Miraak’s influence.

What makes Frea a formidable Skyrim follower is that she has no level cap and will continue to level up with the player indefinitely. She is also an essential character and cannot be killed. Furthermore, Frea is proficient in dual-wield attacks and has above average intelligence. Her other primary skills include altercation and restoration spells.

How to Recruit Her: After completion of ‘The Fate of Skall,’ the Dragonborn may find Frea at the Temple of Miraak in Solstheim and ask her to join as his follower.

However, to successfully recruit her, your speech must be above level 25. Your dialogue choices also play an important role (bribing her to join usually fails). Of course, you can use her as a follower throughout the main questline. 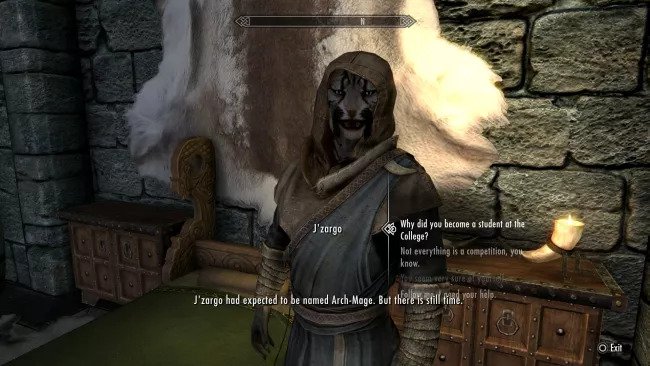 J’zargo is a male sorcerer of Khajiit decent, a cat-like species. As his people, J’zargo is highly agile and a fearsome warrior. He is intelligent, confident, and aspires to become a powerful mage someday, ideal qualities for a potential follower. As a wizard, J’zargo is well versed in various spells, but his strength lies in destruction.

Unlike most other potential mage followers in the game, J’zargo’s abilities in heavy armor and one-handed combat make him a unique and valuable companion during fights. Moreover, J’zargo has no level cap, which means he will continue to level up with the player.

How to Recruit Him? – Once you help J’zargo with testing his flame cloak scrolls, he will become a potential follower. He can be found either in Hall of Attainment or Hall of Elements inside the College of Winterhold.

While as a follower, J’zargo will use only nine of his thirteen spells. And despite his skills as a powerful mage, he will mostly use Apprentice (low) level destruction spells during combat. 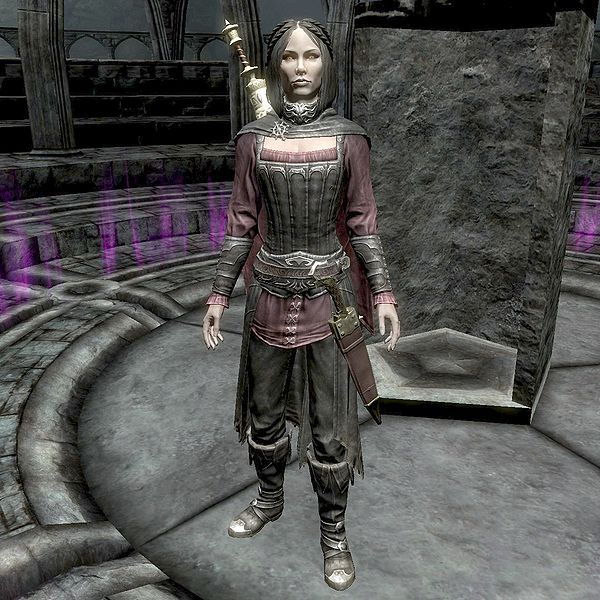 The Dawngaurd expansion introduces Serana, a powerful Nord Vampire, who owns one of the Elder Scrolls. As one of the few remaining pure-blood vampires in Skyrim, Serana is extremely powerful and has one of the most developed character narratives in the game.

Her unique appearance owes it to her attire, which includes a set of vampire royal armor, boots, and an irreplaceable cloak.

At one point in time, the player can even choose to cure her vampirism. Once mortal, Serana will lose many of her vampire powers, such as turning elven arrows to bloodcursed ones or turning the Dragonborn into a vampire. Her combat spells, however, remains active.

How To Recruit Her? – At the end of the Awakening mission in the main Dawngaurd questline, you’ll find Serana inside a sarcophagus in Dimhollow Cavern. During her first interaction, she will ask whether you are a vampire or not and take her home.

After this mission, Serana can be found either in Fort Dawnguard or Volkihar Keep, depending on the faction you choose. 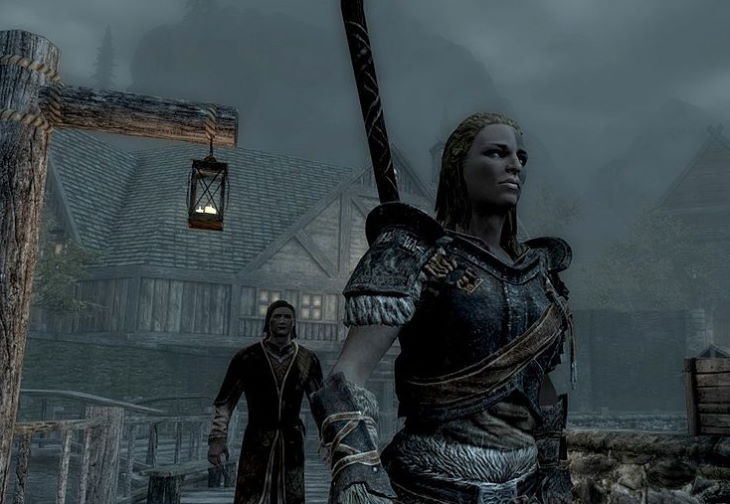 Mjoll the Lioness is a battle-hardened female Nord warrior and a former adventurer. Players find Mjoll increasingly annoying, especially when she keeps repeating her stories. However, her superior strength and the ability to carry more equipment than most other NPCs is hard to pass when choosing a follower.

Her default weapons include a leveled battleax and a hunting bow. If you allow Mjoll to keep the ‘Grimsever,’ she will use it as a preferred weapon instead. Furthermore, she can also wield a pair of magic staves that allow her to strike enemies from a distance.

With an Amulet of Mara, the Dragonborn can marry Mjoll and can choose to live together. After marriage, Aerin (her savior) is most likely to follow Mjoll to your house. She can also be instructed to join the Blades.

How to Recruit Her? – Mjoll the Lioness lives in Riften and can often be found patrolling the city. After reaching level 14, the Dragonborn can have her as a follower by retrieving the sword, Grimsever, from the Dwemer ruins of Mzinchaleft.

One important thing you should keep in mind while having Mjoll as a follower or a spouse is that she despises thieves and the entire Thieves Guild. It’s better to leave her in an inn before going to a heist or receiving a bounty. 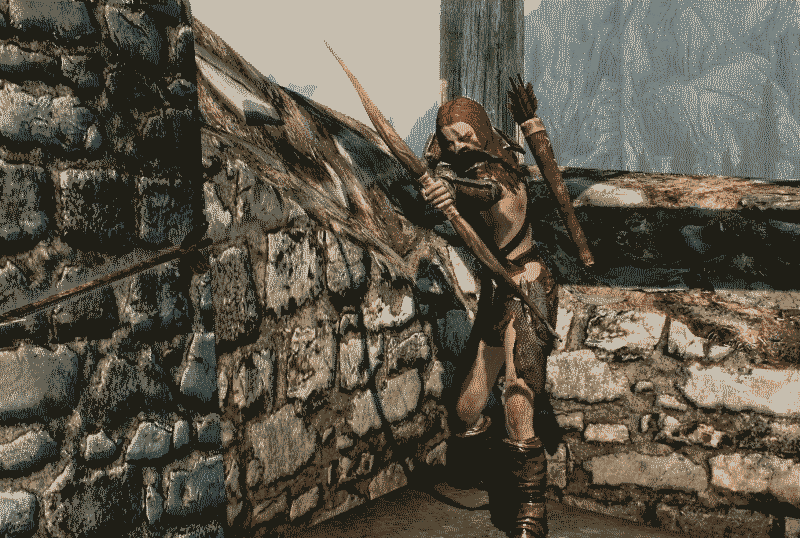 Aela the Huntress is a character of many talents. As a thief, she is exceptionally good at sneaking her way around. She is most skilled in one-handed weapons, especially with bows, but can be equipped with any melee weapon. She is an exceptional archer and expert trainer.

Like Vilkas and Farkas, Aela the Huntress is a member of highly secretive faction ‘the Circle’ and a fellow werewolf. At some point in time, during the Companions questline, Aela will offer you her blood for lycanthropy (in order to become a wolf). She will also provide archery training to the Dragonborn, once he becomes a member of the Circle.

Like her fellow faction members, Aela spends her time in or around Jorrvaskr in Whiterun. Her room is located on the southwest corner of the living quarters’ area.

Aela has some behavioral traits that players should be aware of. She is likely to decline if asked to steal or kill an innocent, but will not confront the or judge Dragonborn for doing the same.

She also shows guard-like behavior during the gameplay (before being a follower). If the player has a high bounty in any of the nine holds, Aela will likely approach and even attack the Dragonborn. 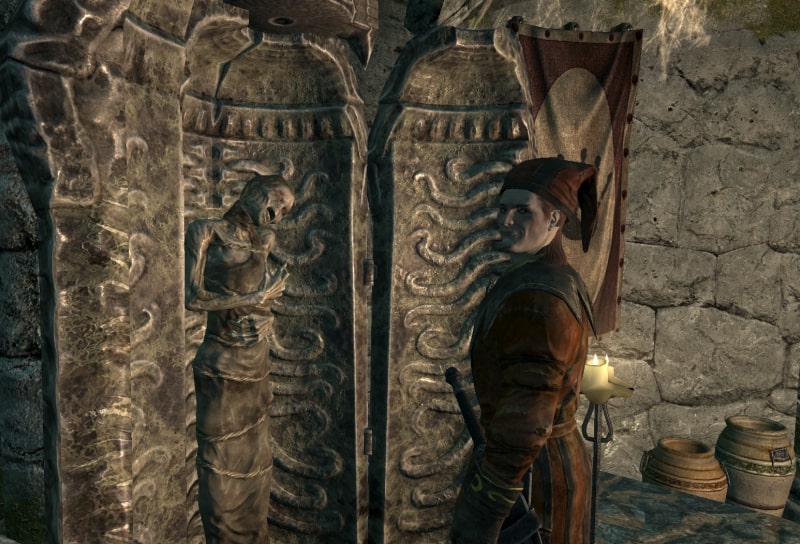 Cicero is a high caliber assassin, renowned for his sneak attack, and perhaps the best Skyrim follower. He can be described as one of the most complex characters in the game. A lunatic, but loyal, Cicero often cracks strange jokes and make remarks about the surroundings. He will randomly start dancing, often for no reason and regardless of the situation in hand.

After he becomes a follower, Cicero will wear any armor given to him, which is ideal since his default outfit doesn’t offer any defense. He is an essential NPC (cannot be killed), except during the mission ‘The Cure for Madness.’

How To Recruit Him? The Dragonborn may first encounter Cicero near Loreius Farm, north of Whiterun. He can be recruited as a follower after completing ‘Hail Sithis!’ under the Dark Brotherhood questline and is found in Dawnstar Sanctuary. The only condition being that he is spared during the quest ‘The Cure for Madness.’

In case the player decides to kill Cicero, you can recruit the two unnamed Dark Brotherhood Initiates that will show up in the Dawnstar Sanctuary instead of him. Killing Cicero means you get to take his heavily enchanted jester vest too. 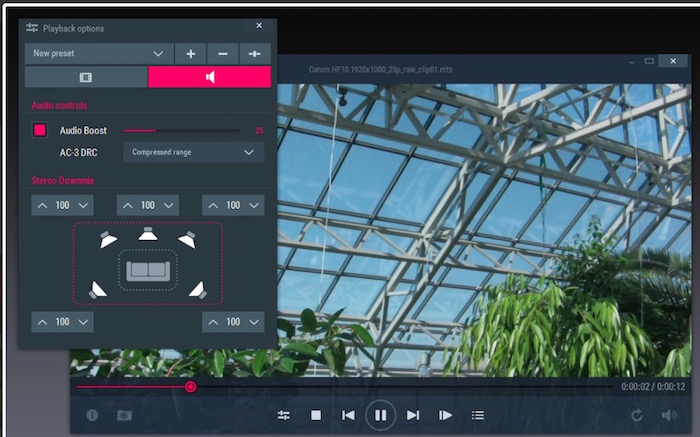 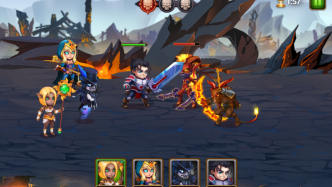 7 Of Hero Wars Best Team Combos You Should Go With