Hitting the power button of a new PC and watching it boot properly is one of the most satisfying moments of life (at least for computer geeks), especially if you’ve spent days on researching, purchasing, and assembling all parts.

Usually, everything works great when you use your new PC to run everyday applications such as MS Office, Chrome, media player, and PDF reader. But how it will perform when you load Fortnite at the highest settings while streaming to YouTube Gaming for hours?

Are you sure the CPU will process all tasks under extreme loads without overheating, RAM will operate consistently for hours, and GPU will deliver desired frames per second?

To answer these queries, we turn to stress testing, which puts PC hardware under excessive levels of stress to ensure system stability when used in a normal environment.

The purpose of this article is to share valuable stress testing tools and benchmarking software so that you can easily monitor how your PC is behaving in extreme conditions. The aim of these tools is to test stability by trying to force the PC to fail and determine the maximum performance possible at a given task.

Before we start, we want to warn our readers about the intrinsic dangers of executing stress tests. The tools listed below might push things beyond the limits defined by the hardware manufacturer. We advise you to continuously monitor all parameters, including CPU clock and temperature, with genuine utilities and abort testing immediately if you notice something unusual. 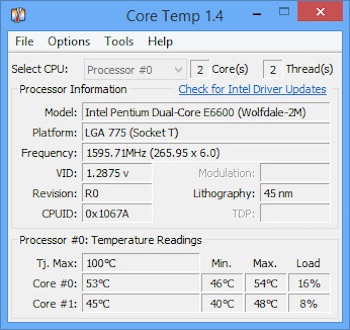 Core Temp is a lightweight yet powerful tool that monitors processor temperatures and other critical information. It can display the temperature of each core of every processor in the system, in real-time with varying workloads. 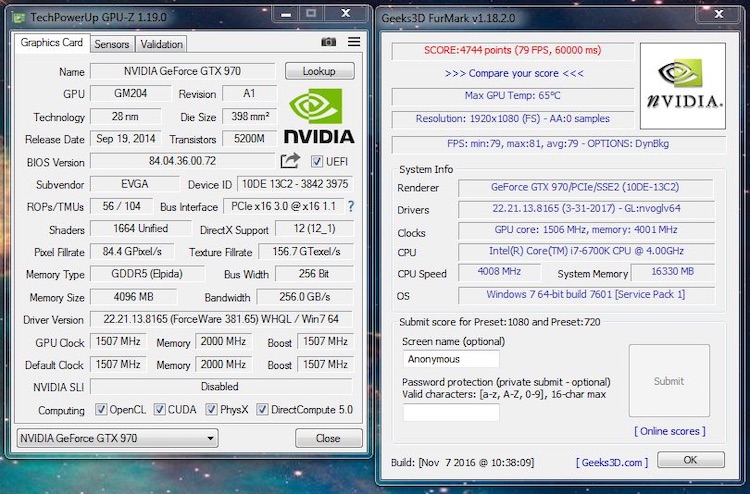 FurMark’s interface is quite easy to use, and it provides complete information whether you want to know how well a new system performs or want to upgrade your system. If you are performing tests on multi-GPU configurations, you need to run FurMark in full-screen mode, as windowed mode only uses the primary GPU.

Tsung is designed for developers to stress test MySQL, SOAP, WebDAV, PostgreSQL, HTTP, and XMPP servers. It has the potential to simulate hundreds of concurrent users on a single system.

It allows users to monitor processor, RAM, and network traffic via SNMP and munin-node agents. Users can generate reports (in HTML format) during the load to analyze response time, server CPU, and other statistics. 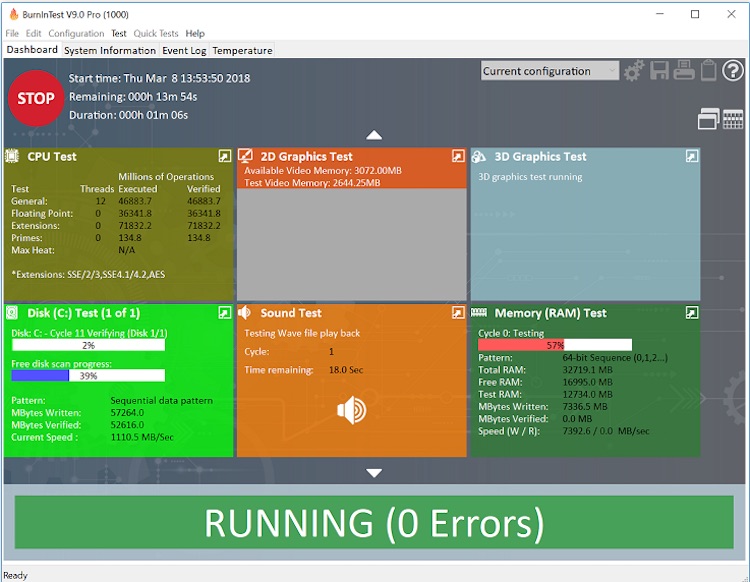 The professional edition comes with various additional tests, including USB ports, webcams, microphones, and tape drives. Its interface shows you the number of test cycles and error(s) encountered in each test along with warnings and detailed information. 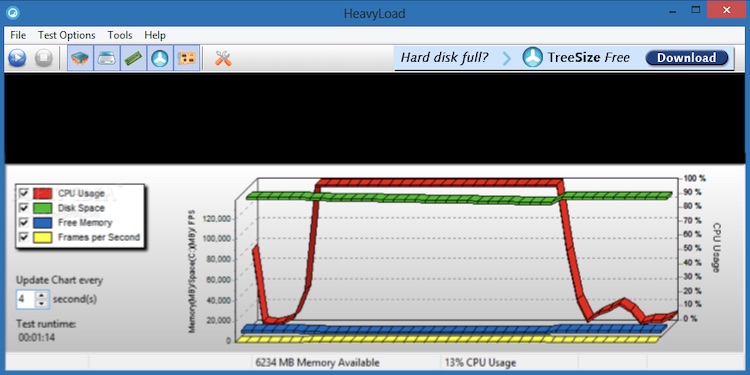 HeavyLoad can be customized as per users’ needs. For instance, users can choose how many of the available cores shall be used on multiple processors cores or set the speed at which text file should be written on the hard disk drive.

The tool carries out complex calculations to simulate the heavy load on the processor and employs 3D rendered graphics to simulate a high load on GPU. Also, users can allocate a specific amount of memory to see how the system performs with scarce memory. 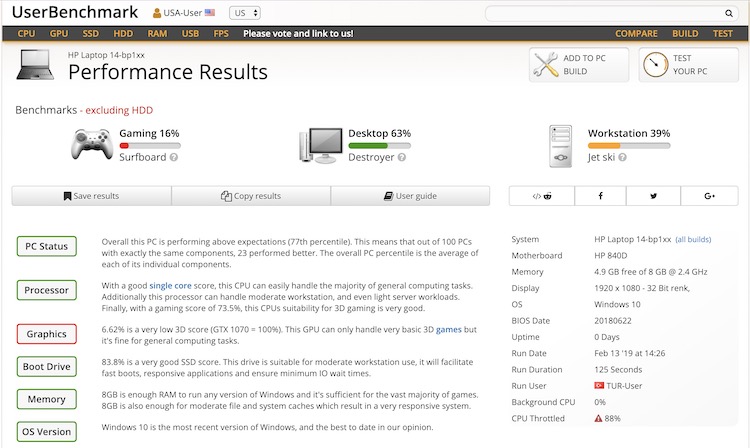 UserBenchmark tests your PC within a minute and compares the outcomes to other users with the same subsystems. It’s one of the best free tools to quickly detect hardware issues and explore appropriate upgrades.

The tool tests four major components of the system: CPU, RAM, GPU, and drive. To test CPU, it executes complex calculations on integers and floating values, whereas for the GPU test, it runs six 3D game simulations. RAM tests include multi-core bandwidth and latency, and for drive tests, it performs several read, write, and mixed IO operations. 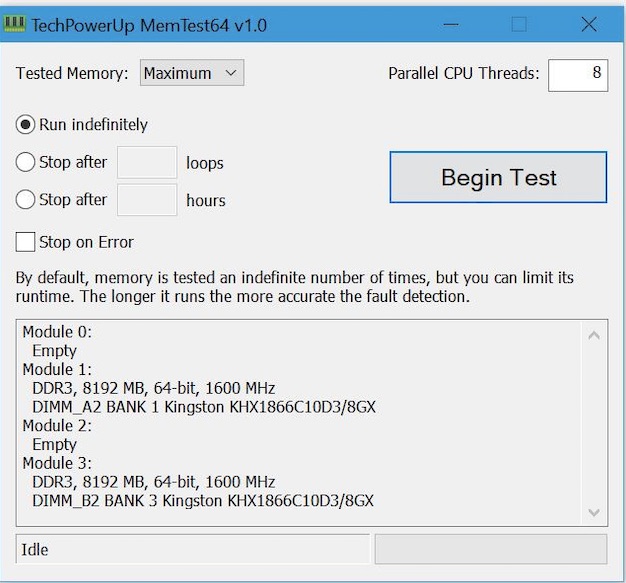 Memtest64 is an extremely lightweight tool that allows you to check your RAM for any kind of issues at the hardware level. In Windows, memory errors lead to data corruption, major application crashes, and blue-screen of death. This mostly happens due to bad memory frequency or faulty hardware.

Memtest64 puts physical memory with test-patterns and frees up memory for testing by pushing other programs into the pagefile. Overclockers can use this tool to maximize the performance of memory by altering frequency and DRAM speeds. 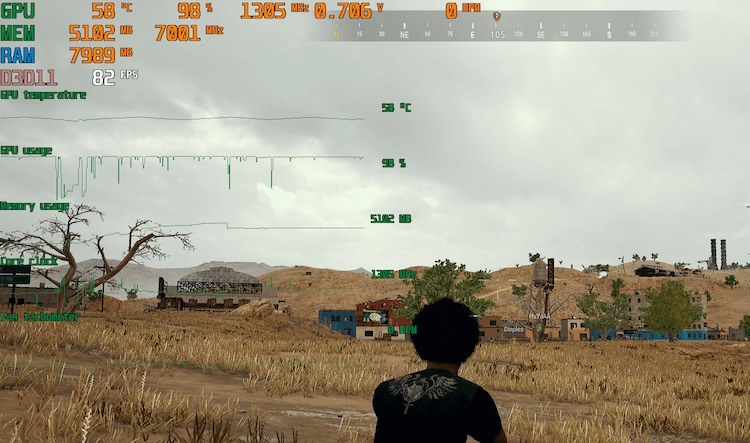 MSI Afterburner gives you full control over your GPU: you can increase GPU’s voltage,  clock frequency, and fan speed to find the perfect balance between temperature and performance.

The tool provides you detailed insights into hardware and lets you run in-game benchmarks, take in-game screenshots and record gameplay. The on-screen display gives you real-time data of your system’s performance, so you can monitor the effects of overclocking configurations while gaming. 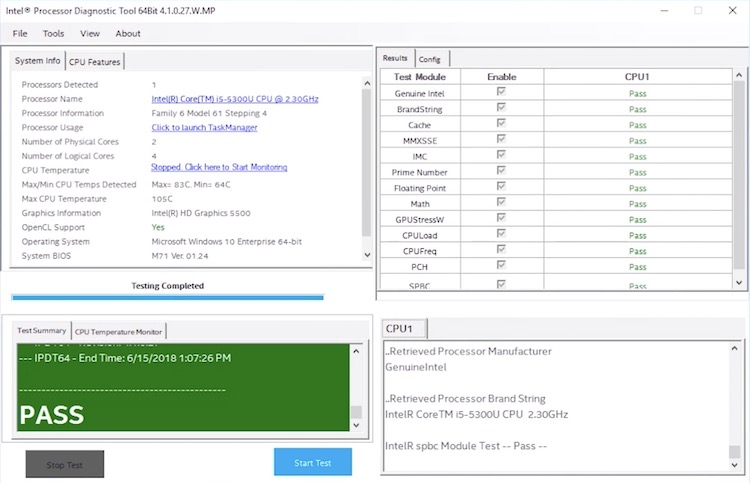 As the name suggests, the Intel Processor Diagnostic Tool checks for the brand identification, verifies the functionality of Intel microprocessor, and performs a stress test on the CPU. It verifies the processor’s operating frequency and its specific features. 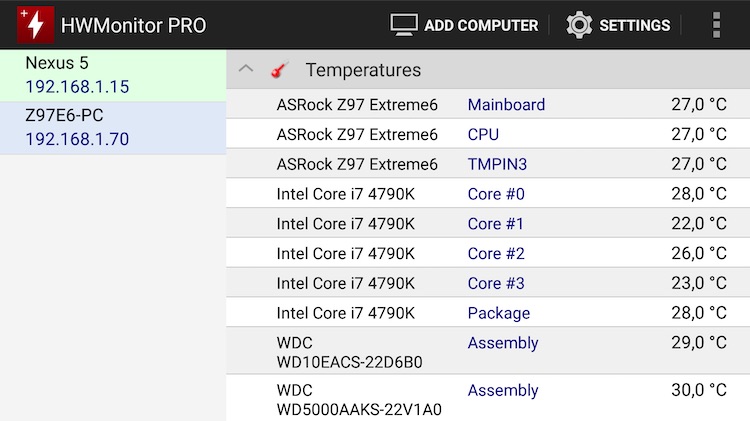 Price: $22 for the Pro version
Available for: Windows and Android

The Pro version gives you the ability to transfer monitoring data over a local network so that you can view information on another device. The current version lets you monitor up to 10 systems from your Android smartphone. 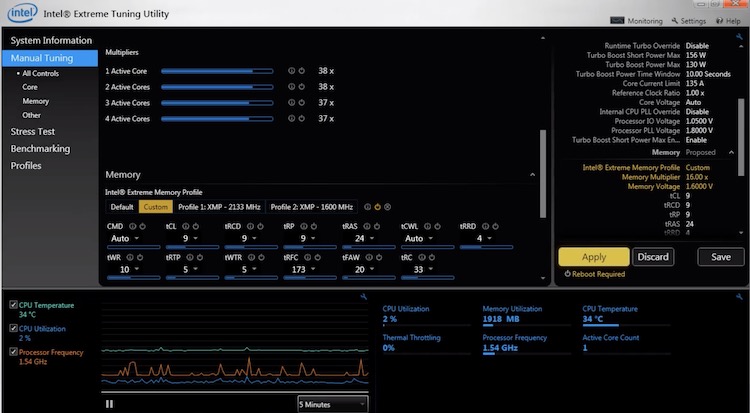 For Intel systems, this is one of the best performance tuning software available in the market. It allows you to overclock, monitor and stress test the CPU, memory, and GPU.

The interface shows an array of robust capabilities along with new features available on Intel Motherboards and Application Processors. You can use the graph function to continuously monitor package temperatures, maximum core frequency, CPU utilization, thermal throttling, and power limit throttling. 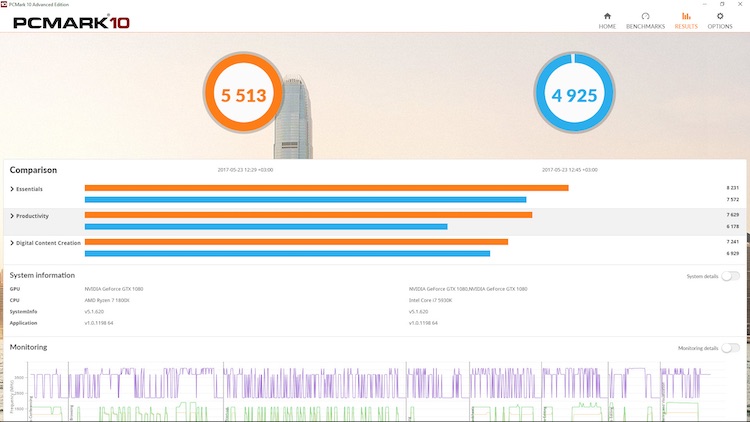 PCMark benchmarks determine the system’s performance by executing tests based on real-world applications. These tests include everyday activities, such as playing games, editing photos and videos, and browsing websites.

Each benchmark run creates low-level workload scores, mid-level test group scores, and high-level benchmark scores, which can be compared side by side within the tool. Overall, it’s an accurate and unbiased tool for comparing systems and selecting upgrades.

Prime95 is one of the oldest CPU stress testing utilities. It throttles the CPU to find Mersenne prime (2n − 1) by implementing two algorithms: Lucas-Lehmer and Probable prime. Usually, if your system can run this application for straight 6 hours (without any interruptions and errors), it will less likely to have issues over its usable lifetime.

Prime95 comes with a ‘Torture Test’ mode, specifically for testing PC subsystems for errors. You can configure the software to better test different components of your system by changing the size of the Fast Fourier transform.

Prime95 doesn’t completely stress all processor threads if the number of threads is greater than 64 in Windows 64-bit version.  In this case, the operating system will handle the processors in groups, with each group containing a maximum of 64 threads.

3DMark is a powerful benchmarking tool designed for system builders, gamers, and overclockers. It can be used to determine CPU workload processing and 3D graphics rendering capabilities of a wide range of devices, from notebooks and tablets to the latest 4K gaming PCs.

It automatically scans the hardware and suggests a suitable benchmark for your device. Once you start the test, it displays GPU and CPU temperature, frame rate, clock speeds in real-time. It also compares your device with other models to help you decide if it’s time for an upgrade. 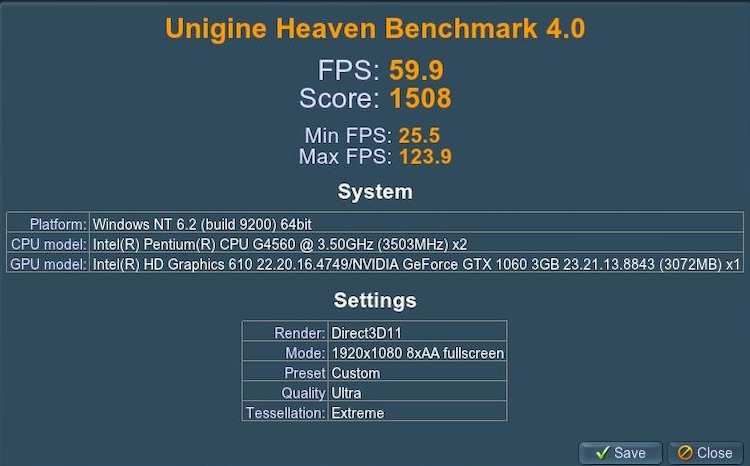 Unigine Heaven hammers GPUs to the limits. It is one of the most powerful and accurate tools to determine the stability of a graphics card under intensively stressful conditions. At the same time, it also checks the potential of a cooling system under maximum heat output. 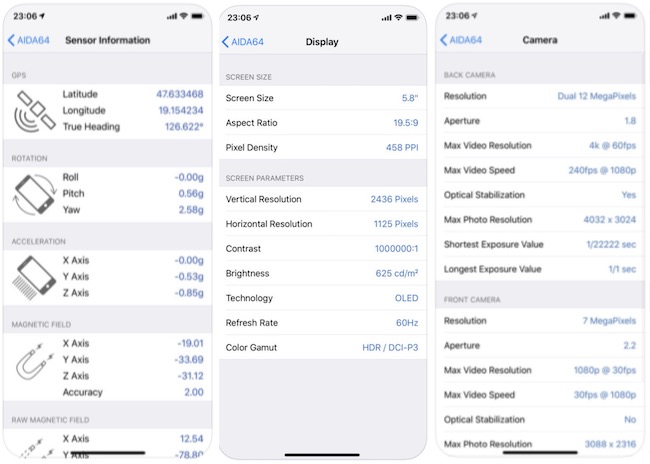 Price: Starts at $40
Available for: Windows, Android, and iOS

AIDA64 is a comprehensive system diagnostic tool designed for professionals. It is packed with many unique features and can be used to stress test every PC component, including GPU, CPU, and RAM. 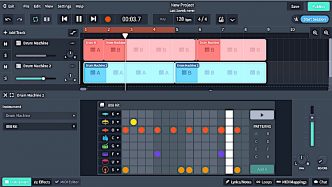 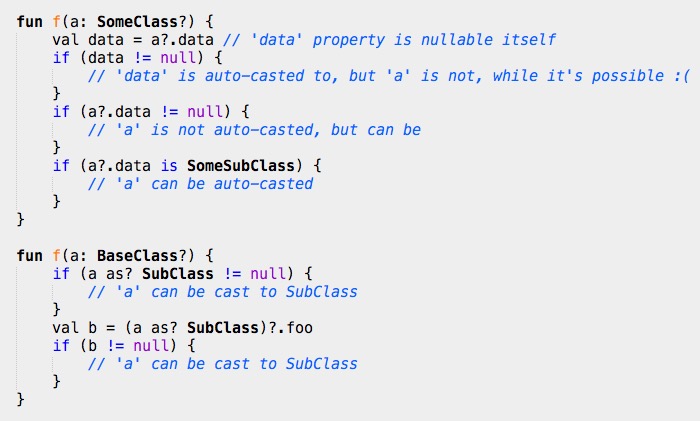