SpaceX is working on a game-changing project under the supervision of its cofounder Elon Musk, a tech entrepreneur who is widely known for his bold decisions and investments. On 29th September 2017, Musk announced a brand a new rocket and outlined how SpaceX will colonize Mars.

What you know is they are developing the world’s biggest rocket, codenamed Big Fu***ng Rocket (BFR for short), which will replace the SpaceX’s Falcon launch vehicle and Dragon spacecraft, and will carry people from Earth to Mars.

What you might don’t know is its design, engine specifications and scope of future missions. Well, today we are going to enlighten you about everything you don’t know about BFR. Fasten your seatbelts.

First thing first, let’s take a look how big it is. Although it won’t be the tallest rocket ever created, it stands second, at 106 meters, just behind the Saturn V moon rocket, weighing 4,400 tons. Also, it is not wide as the Saturn V, but it maintains huge 9 meter diameter from the bottom to the top, only tapering at the very tip. 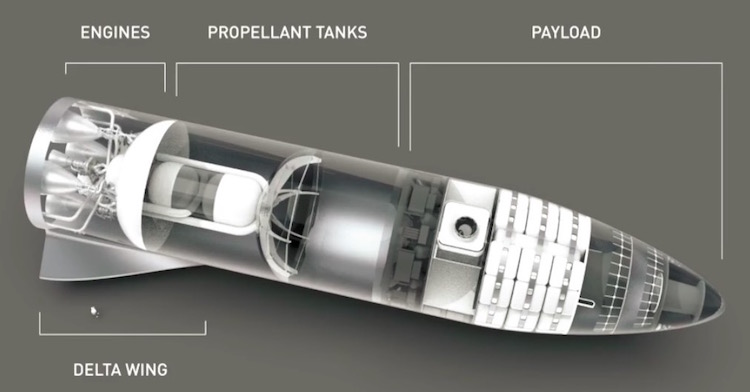 BFR is cylindrical in shape (for mass optimization) with small fins at the rear end. It has 3 configuration – crew, cargo and tanker. The crew and cargo are built to fly to Mars. Also, the cargo section can be used to launch satellites to Low Earth Orbit.

The payload is at the top of the rocket. All passengers and cargo will be stored here. It will have a pressurized volume of 825 m3 and 40 cabins (enough for carrying 100 people), large central storage area, galley, and a solar storm shelter. As usual, the lower part of the BFR will be used for its propellant that includes 860 tons of liquid oxygen and 240 tons of methane.

What makes BFR even more efficient is the fact that the first and the second vehicle stage are developed to be completely recoverable and rapidly reusable. The upper portion (often referred as Big Falcon Ship) is designed to absorb the heat generated by entering the Mars’ atmosphere (1,700 degree Celsius), as well as by reentering the Earth’s atmosphere. It will land using a trio of Raptor engines to come to a soft and accurate tail-first touchdown.

BFR also has a small wing named ‘Delta’ (as you can see in the image), with a split flap to handle lunar touchdowns and landing on Earth and Mar’s atmosphere. 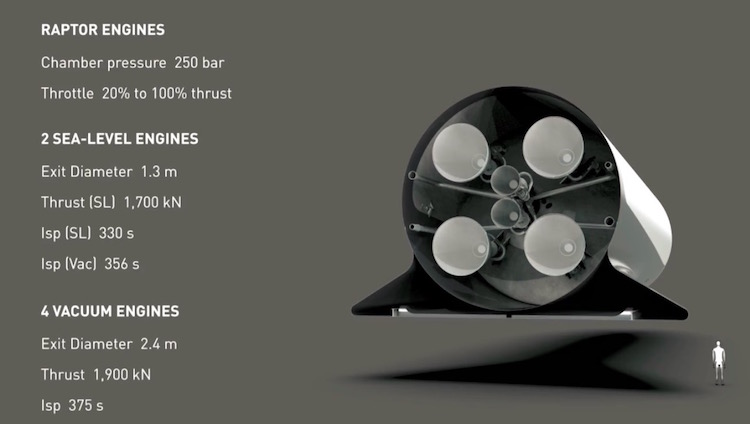 The other interesting thing about BFR is its thrust. It will be powered by 31 methane fueled Raptor engines that can produce massive 53 Meganewtons (6,000 Tons-force) of thrust at sea level, compared to 35 Meganewtons of thrust on the Saturn V.

Since BFR would land with multiple engines, it would be more reliable than the Falcon 9. It will also be precise enough to land back on its launch mounts with the help of legs.

If you look at the rocket capability, BFR would carry 150 tons of payloads (vs Saturn V’s 135 tons of payload capacity) keeping the launch cost lower than Falcon 1.

Musk made it look so simple, but a lot of technology has never been tested. However, to demonstrate the progress, he mentioned that SpaceX has already tested the Raptor engines for about 1,200 seconds (typical for Mars landing). The longest test lasted 100 seconds, limited by size of the propellant tanks. The test engine operates at 200 bar pressure, however, the rocket engine is aimed for 250 bar, and engineers are expecting to reach 300 bar in later tests.

Another major challenge would be massive cryogenic fuels. Musk added that SpaceX has already tested a 264,000 gallon prototype (carbon-fiber tank) by launching it 91 meters into the ocean.

One more thing, after refueling the spacecraft in high Earth orbit, it will be able to land on the Moon as well as return to Earth without the requiring any further refueling. 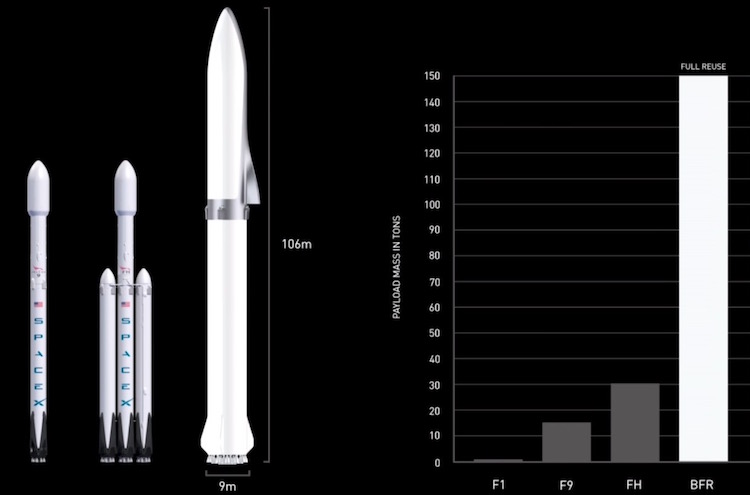 Elon Musk says SpaceX’s next-generation rocket, BFR will be able to fly into Earth’s orbit and travel with the maximum speed of 27,000 km/h, allowing you to travel almost anywhere on Earth within 1 hour.

Although the primary goal is to send this rocket to the Red Planet, it would also be able to go to the Moon. The cargo mission to Mars (2022) will find water and then create a propellant plant to refuel rockets and allow them to return to Earth.

It all seems quite unbelievable because it’s the biggest rocket ever and it depends on a host of technology that has not been proven yet. Moreover, it is still unclear that how SpaceX would pay for all this stuff.

But because all these words are coming out of Musk’s mouth, not any wild-eyed futurist, people have actually started believing that colonization on mars is possible in the near future. Musk has already done a lot of crazy things that once seemed impossible. Next year, we will probably have a much better understanding of how things are going.

There is a great change SpaceX will get to the Mars before NASA, but this is not the race, it’s about getting things done right. 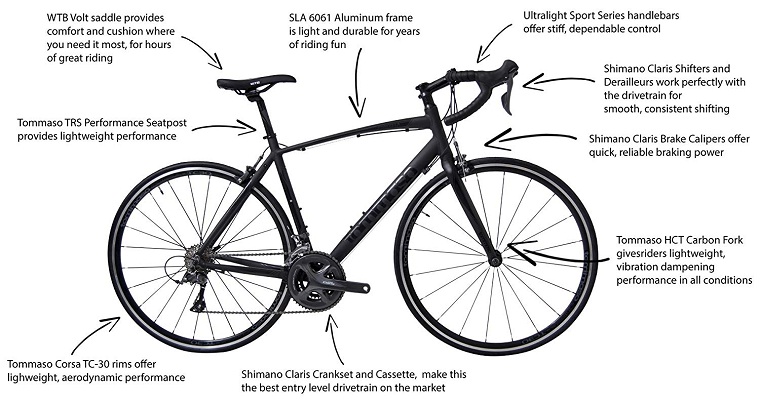 Affordable Road Bikes: How To Choose The Best Model For Your Needs