A powerful V16 engine, front-wheel driving mechanism, an engine without pistons –-  developing such complex mechanisms is not a matter of months. It literally took 400 years to develop and create the car of our dream equipped with all the modern technologies. We have arranged most of the cars from the past to the present that brought advanced technologies, comfort, and features to the automotive industry.

The history of the car starts with the introduction of self –propelled vehicle by Nicolas Joseph Cugnot around the year 1769-1771. Cugnot was a French inventor widely credited for his invention of Fardier a Vapeur (French).

Cugnot’s Fardier a Vapeur, weighed around 2.5 tonnes (2500 Kg), had a total of three wheels, two in the rear and one in front. The front-wheel supported the steam boiler and the mechanism, while the power unit was mounted on the back portion of the vehicle. It had a total capacity to carry four passengers while moving at a speed of 2.25 miles per hour.

During its run, it recorded many serious problems, including the uneven weight distribution and steam boiler efficiency. Due to such reasons, in 1880, King Louis 15 ordered it to transfer to Conservatoire National des Arts et Metiers in Paris. 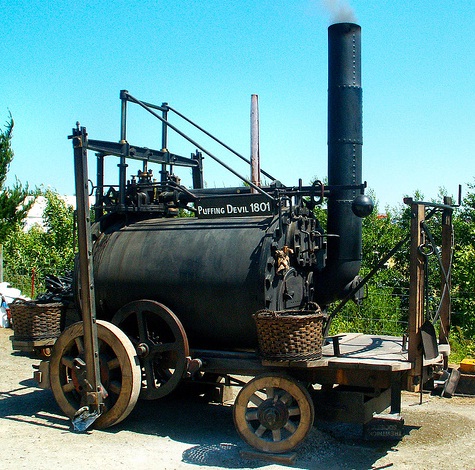 In 1801, Richard Trevithick built a steam road locomotive, which he demonstrated successfully by carrying six passengers across the village of Beacon. By many, it’s believed to be the first demonstration of a steam-powered road vehicle.
Trevithick’s puffing devil works on a high-pressure steam engine which produces steam by boiling the water from the boiler. The high pressure is then used to move the piston in the engine. 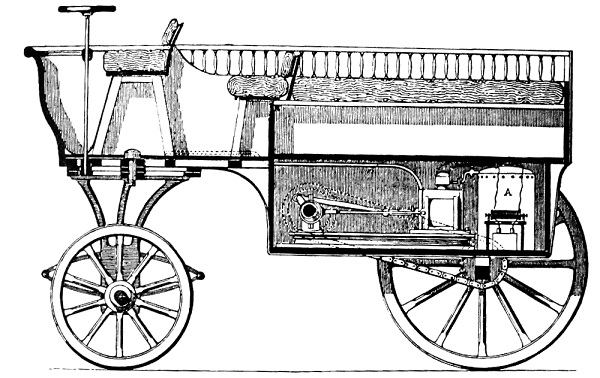 Etienne Lenoir in 1863 invented the Hippomobile, a vehicle powered by an internal combustion engine. Originally, a hippo mobile is a cart or carriage drawn from the horse. Lenoir’s Hippomobile, on the other hand, had a hydrogen gas-fueled one-cylinder internal combustion engine which is based on his own design of gas engine of 1860. Etienne Lenoir used the first-ever gasoline combustion engine in 1860. It made the first test drive from Paris to Joinville-le-point in France, about eleven miles in approx. three hours. 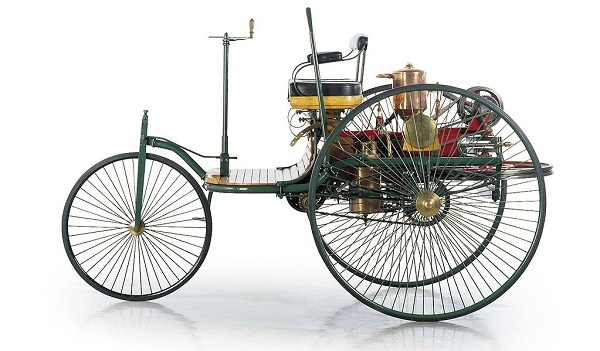 Motorwagen (developed in Germany in 1885) is regarded as the first ancestor of the modern car. It was invented by Karl Benz and produced under the name of Rheinische Gasmotorenfabrik Benz & Cie, for which he received the German patent in 1886.

The Benz Motorwagen was a three-wheeled tricycle vehicle in which, the engine was at its rear end. It had steel tubing with woodwork panels. The wheels with solid rubber tires on the vehicle were Benz’s own design. Fully oval springs were used at the back along with a central shaft and chain drive on both sides.

Karl Benz used the Benz 954 cc single-cylinder four-stroke engine. The engine produced 67 horsepower (0.50 kW) at 250 RPM. The engine weighs just about 220 lbs, which was very light for that era. It was fully equipped with modern new technology such as open crankcase and drip oiling system that alienated it from other vehicles. 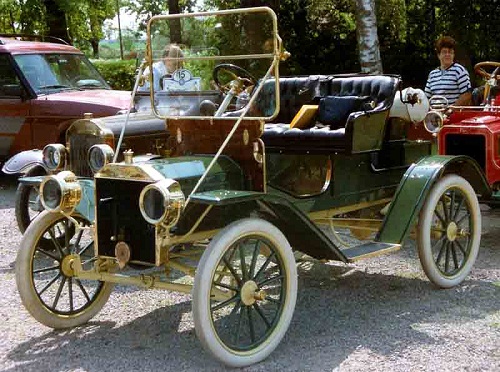 Ford Model-T, produced by Ford motor company during 1908-1927. The Ford Model -T was named the most influential car of the 20th century, because of its modern technology, reliable structure, and most importantly because of its marketing. There were many automobiles that already existed around 1908, but they were mostly conservative and too expensive to the middle-class people until the introduction of Model-T. The Ford Model T was arguably the first automobile mass-produced on assembly lines and affordable car of that generation.

The Model-T had a 177-cubic-inch (2.9 L) four-cylinder engine, boasting 20HP, and had a top speed of 40-45 mph. The vehicle had a rear-wheel driving system with the engine mounted in front. 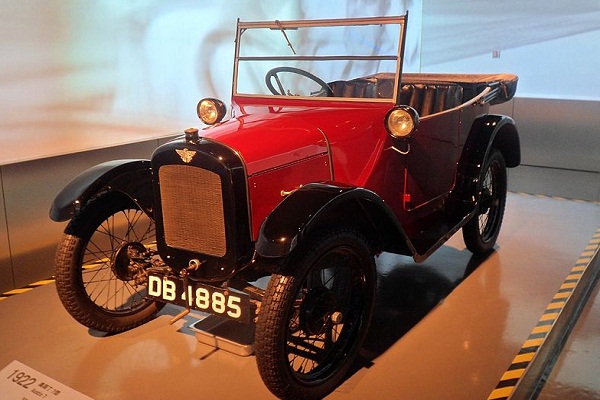 The Austin Motor Company Limited was an English automobile manufacturer established in 1905 by Herbert Austin now known as the British Motor Company.

In 1920, Herbert Austin came up with the concept of a smaller, compact car, mainly to meet the needs of middle-class families in the cities. Later on, he and Stanley Edge successfully created a small car using a four-cylinder engine. The engine design had a capacity of 696cc (55mm x 77mm) giving power of 7.2 HP. Stanley Edge also carried out the design of other mechanical components such as the three-speed gearbox and clutch assembly. Austin 7’s design was majorly influenced by Peugeot Quadrilette model.

Austin 7 was one of the most popular and widely copied vehicles ever made. Some big shots like BMW and Nissan also used the Austin 7 model design in their first car.

The Lancia Lambda is produced during the time period from 1922 to 1931 by Lancia. It was the first car to have a load-bearing monocoque body, and it also pioneered the use of an independent suspension. Lancia also invented a shock absorber.

The aluminum Lancia V4 engine was also admirable. All three displacements shared the same long 120 mm (4.7 in) stroke, and all were SOHC designs with a single camshaft serving both banks of cylinders.

The Cadillac V-16 was Cadillac’s one of the best automobiles in 1930 until production ceased in 1940. Around 4076 models were constructed in the eleven years. This was the first V16 powered car to reach production line in the United States. V16-powered Cadillac was one of the most legendary ultra-luxury cars of that era. 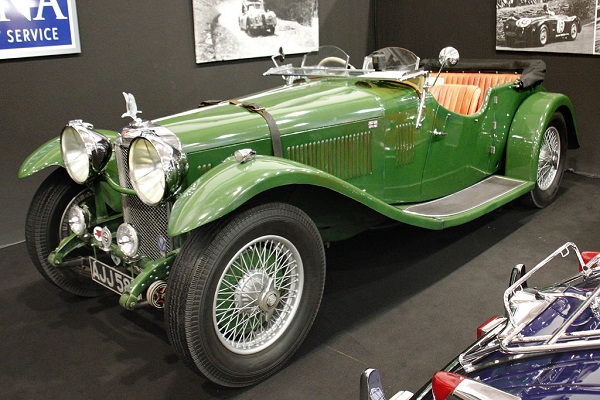 Alvis was a British car manufacturer active between 1919 to 1967 in Coventry Britain. One of the most noticeable cars was Alvis speed 20, manufactured in 1932-1936. Speed 20 was the first vehicle using a synchromesh gearbox.
The Speed 20, has a modified version of the engine that was used earlier in the Silver Eagle cars, generating 87 HP (65 kW). 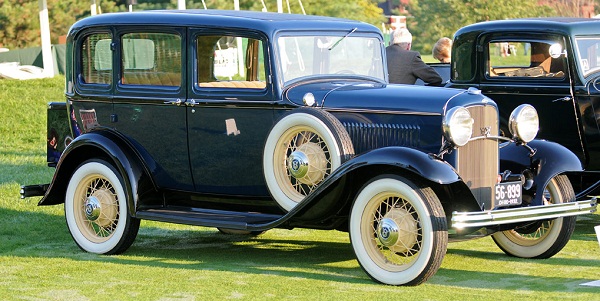 After Model A, Ford launched a completely new model in 1932. The Model 18 was the first American car to have a gigantic V8 engine installed. The V-8 was marketed as the Model 18, commonly known as the Ford V 8. It had the all-new flathead V 8 engine, 221 cu in. (3.6 l). V8 had 65 HP (48 kW) when introduced. This engine choice was more popular than the four-cylinder.

The Tatra 77 (T77) is the first serial-produced and aerodynamically designed automobile of the Tatra Automobile Company founded in 1850. It was designed by Hans Ledwinka and Paul Gray, a Zeppelin aerodynamic engineer. The Tatra 77 is a coach-built automobile, powered by a 75 horsepower (56 kW) 3.4-liter air-cooled V8 engine. It possessed advanced engineering such as overhead valves, hemispherical combustion chambers, dry sump, fully independent suspension, rear swing axles.

Tatra was the first one to successfully introduce it into serial production. There were numerous reasons why Tatra took such a revolutionary approach to the new car concept. First, their aim was to reduce air-drag, which increases with the square of speed. Second, a car with a common body shape needed a very powerful engine to reach higher speeds.

Citroen in Avant provided a solid steel single body frame. The unique design made the Traction Avant very artistic and glamorous. Its design made the car lighter than the conventional designs of the era. It was able to reach 100 km/h (62 mph) and consumed fuel at the rate of 10 liters per 100 kilometers (24 mpg), which was quite impressive. 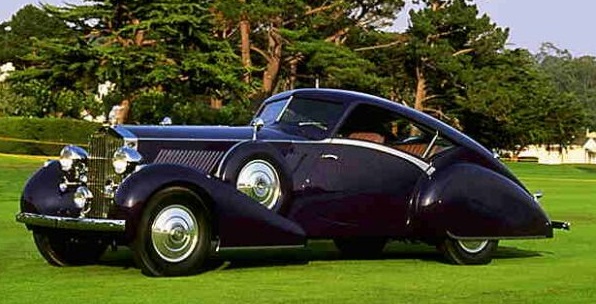 The Rolls-Royce Phantom III was introduced by Rolls Royce LTD, in 1936. Phantom lll was the first-ever luxury car to have a V12 engine. The Rolls-Royce III was powered by an aluminum-alloy V12 engine of 447in³ (7.32L), having a bore of 3.25 inches (82.5 mm) and a stroke of 4.5 inches (114.3 mm). It is a pushrod engine with overhead valves operated by a single camshaft in the valley between the cylinder.

After World War II, automobile design went through several revolutionary changes. One of the most prominent change is the adoption of ponton style cars (with compact ledge elements), first of those cars was Soviet GAZ-M20 Pobeda.

After the success of traction Avant, Citroen launches the Citroën DS or Citroen ID in 1955. Italian sculptor and industrial designer Flaminio Bertoni and French aeronautical engineer André Lefèbvre designed the car. Citroen DS was noted for its fully aerodynamic, advance body design and innovative technology. The DS ranked third in the 1999 Car of the Century poll of the world’s most influential auto designs and named the most beautiful car of all time by Classic & Sports Car magazine.

Few of the many technical innovations brought in by Citroen were hydropneumatic suspension, including an automatic leveling system and variable ground clearance. They also used suspension for clutch and transmission. 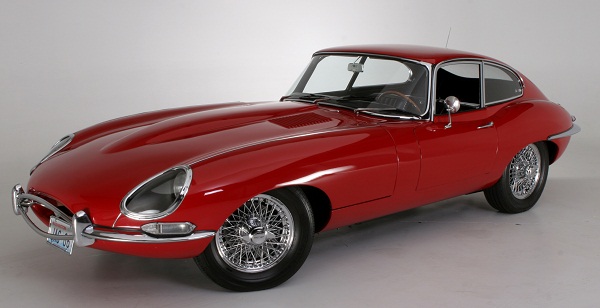 The Jaguar E-Type is a British sports car, first manufactured by Jaguar Cars Ltd in 1961. This is one of the classic sports car designs. It was a perfect combination of beauty, performance, and flexible pricing. The E type had clocking speed of 50 mph in 0-60 seconds, monocoque construction, disc brakes, rack, and pinion steering, and unrivaled looks.
In March 2008, the Jaguar E-Type ranked first in a The Daily Telegraph online list of the world’s “100 most beautiful cars” of all time.

The Ford Mustang, a product of Ford Motor Company produced in 1965, was a serially produced car which is still in operation. Ford was the first car company to introduce “pony car” in the international market. Mustang gave rise to competitors such as the Chevrolet Camaro, Pontiac Firebird, AMC Javelin, revamped Plymouth Barracuda and Dodge Challenger.

In 1966, Subaru 1000 produced by Fuji heavy industries is one of the first Japanese built sedans using a boxer engine, introducing the first “double offset joint” driveshaft to the front wheels. It had a Four-cylinder engine having 55 HP (41Kw).

The Oldsmobile Toronado was launched in 1966 by a General Motors division, Oldsmobile. It was designed to compete in the market with other cars like Thunderbird and Buick Riviera. The Toronado was the second car having front wheel driving mechanism built in America since the demise of the Cord in 1937. Toronado was the first car to introduce the electronic anti-lock braking system and the airbag safety system. The car was powered by 425 cu in. (7.0 L) 385 HP (287 kW) Rocket V8 engine.

The Mercedes-Benz S-Class, also known special class “Sonderklasse”, is a series of flagship vehicles produced by the German automaker Mercedes-Benz. The S-Class has served as the top model for Mercedes for over fifty years in its various incarnations. The S-Class has many of the latest innovations in auto-vehicle, including, Drivetrain technologies, interior features, and safety systems. Their important innovations include the electronic traction control system and seat belts. The S-Class has ranked as the world’s best-selling luxury sedan for its models before 2013.

The Ford Focus launched in 1998, was a revolutionary change in the automotive industry, produced by the Ford Motor company. Though there were many hatchback cars available, Ford Focus was arguably the best selling hatchbacks ever, crossing the Toyota Corolla. 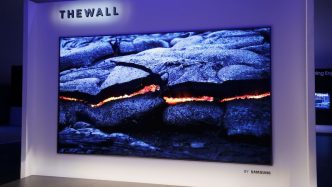 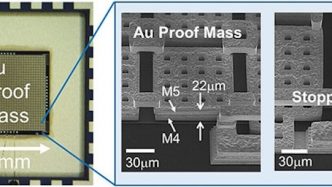