Earth’s interior structure [along with its composition] is one of the very first things students learn in geography/geology. It gives us a rough idea about the earth’s distant past and how life, as we know today, came into existence on this planet.

Since it is impossible to observe depths of the planet directly, our current understanding of the subject is entirely based on topographic studies of the surface, and analysis of volcanic ejecta and seismic waves.

The Earth can simply be divided into just three layers, namely crust, mantle and core, but other layers are also recognized due to their unique chemical properties and density. Below are the important layers of the earth that you should know. 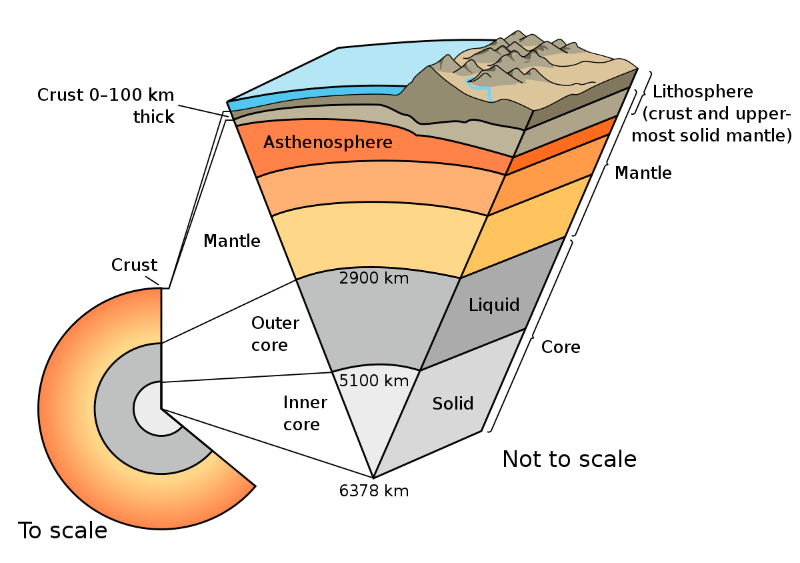 The crust is the outermost layer of the earth with depth varying between 5-70 km. The Earth’s crust is composed of three major types of rocks; igneous, sedimentary and metamorphic most abundant being the igneous (granite and basalt).

The crust is divided into two types; oceanic crust and the continental crust. The line or boundary that separates these two is known as Conrad discontinuity.

The oceanic crust extends from 5 km-10 km below the seabed. It is mostly composed of mafic rocks (basalt) and is often referred to as Sima (silicate magnesium). The density of oceanic crust is about 3 g/cm3.

This process is countered by the destruction of oceanic crust in subduction zones. A subduction zone is where one plate (either oceanic or continental) is subdued into the mantle by an overlying plate.

Read: The Outermost Part Of Earth’s Atmosphere Extends Far Beyond The Moon

Just below the earth’s crust lies the mantle, which is divided into two main layers; the upper and lower mantle. The mantle, as a whole, makes up about 84% of the earth’s volume.

The estimated depth of the upper mantle is about 640 km, while the entire mantle (including the lower mantle) is approx. 2,900 km deep.

The boundary which separates the earth’s crust from the upper mantle is called the Mohorovičić discontinuity (Moho for short), however, it is not found at a uniform depth. Moho was discovered by Croatian seismologist Andrija Mohorovičić in the year 1909.

Two mechanically different regions namely the lithosphere and asthenosphere are located in this layer. 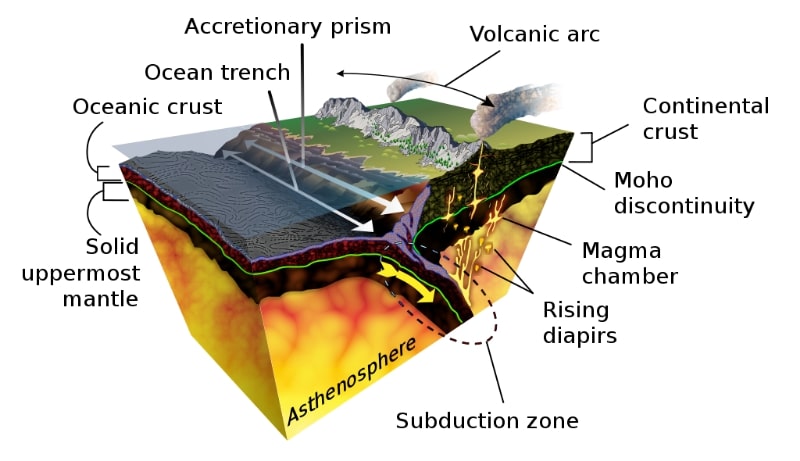 The asthenosphere is shown at a subduction boundary

Beneath the lithosphere lies a much denser and mechanically weak layer of the asthenosphere. Although this layer is usually located anywhere between the depths of 80 km and 200 km, there are some regions where it could extend as deep as 700 km beneath the Earth’s surface.

The pressure and temperature in this region are so high that rocks become semi-molten. Interestingly, the asthenosphere is far more ductile than the lower mantle, where temperatures are far more higher. The Lithosphere-Asthenosphere boundary (LAB) is what separates the two layers and its depth is determined by apparent changes in chemical and thermal properties of the rocks.

Both lithosphere and asthenosphere are associated with plate tectonics, a geoscientific theory that describes the movement of lithospheric blocks known as tectonic plates.

Simply put, the rigid asthenosphere ‘floats’ on top of the ductile asthenosphere causing the tectonic plates to move. Geological activities such as earthquakes and volcanic eruptions are commonly associated with plate tectonics.

The transition zone is a distinct layer in the Earth’s mantle between the depths of 410 km and 660 km below the surface. Here, due to high temperature and pressure, rocks become denser and goes through structural changes (crystallization).

Studies have shown that mantle’s transition zone holds as much water as the Earth’s oceans. However, water exists there only in the form of hydroxide ions. At the depths of 525-660 km, hydroxide ions are trapped inside minerals made of olivines such as Wadsleyite and ringwoodite.

Between the transition zone and the core lies the lower mantle. It extends from 660 km to about 2,900 km below the Earth’s surface. The temperatures in the lower mantle range from 1900 K to 2630 K, depending on the depth. While this region is much hotter and denser than the upper mantle, it is much less ductile.

The lower mantle is primarily composed of minerals such as calcium-silicate perovskite and ferropericlase, both originate from ringwoodite.

Based on the Preliminary reference Earth (PREM) seismic model, the lower mantle can be divided into three sections; the uppermost lower mantle, mid-lower mantle, and the D” layer.

The core-mantle boundary or CMB is where the silicate-rich lower mantle interacts with nickel-iron outer core. It is located at about 2,890 km below the earth’s surface and is consistent with seismic velocity discontinuities. The boundary is also known as Gutenberg discontinuity. 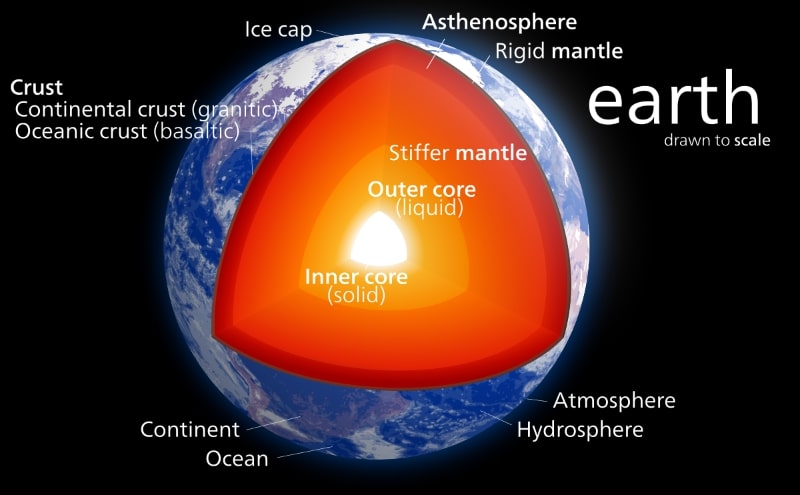 Earth’s core is the hottest and most dense part of our planet. It is believed to be almost entirely composed of Nickle and Iron. The core is divided into two layers; a solid inner core and fluid outer core and the boundary the separates these two regions is called Bullen discontinuity.

The outer core extends from 2,900 km to roughly about 5,150 km below Earth’s surface. Even though the exact temperature of Earth’s core is almost impossible to measure, it is estimated to be somewhere around 3,000 K to 4,500 K near its upper regions. It can go up to 8,000 K near its boundary with the inner core. 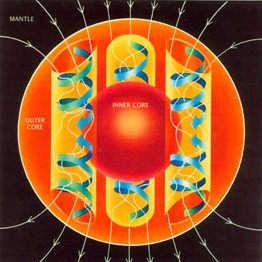 Illustration of the dynamo mechanism

The outer core appears to have very low viscosity which causes violent convection in this region. According to the dynamo theory, the fluid nickel-iron outer core is what fuels the Earth’s magnetic field. The average magnetic field strength of the outer core (2.5 millitesla) is about 50 times stronger than that of the surface.

Unlike the fluid outer core, Earth’s inner core is hard and has a total radius of 1,220 km. Its estimated temperature is close to 5,700 K, similar to that of Sun’s outer surface. While the temperatures at the inner core far exceed the melting point of iron, it remains solid due to intense pressure exerted by the rest of the earth.

Since the inner core is connected to the fluid outer core, it may rotate at a slightly different rate than the rest. This theory was confirmed by a study conducted in 2005.

By analyzing discontinuities in seismic waves researchers were able to conclude that Earth’s inner core is actually rotating faster than the rest of the Earth by about 0.3-0.5 degrees per year, that’s 50,000 times the plate tectonic motion.

The inner core is growing by about 1 mm/year. As the heat from the outer core is transferred to the mantle, it causes the innermost portion of the liquid region to freeze or solidify and inner core to push upward. 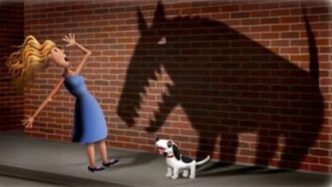 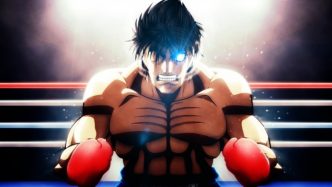 12 Best Anime Series Of All Time