A telescope is, basically, an instrument that allows us to observe and study astronomical objects in different frequencies of the electromagnetic spectrum, from gamma-rays to low-frequency radio waves (including visible wavelength). Based on the wavelength and frequency of light they detect, telescopes can be classified into different types. But, before we dig deep into this matter, let’s take a brief look at the history of telescopes.

The earliest known telescope in history appeared back in early 1600 in the Netherlands and was supposedly invented by a Dutch eyeglass maker Hans Lippershey. However, the name ‘telescope’ was non-existent until 1611 and was conceived by a Greek mathematician Giovanni Demisiani.

By 1610, the Italian polymath Galileo Galilei had already developed his own improved version of the telescope, with which he later discovered four of the Galilean moons. Then around the late 1660s, Issac Newton designed the first-ever reflecting telescope, which is now known as the Newtonian reflector.

For the next three hundred years or so, telescopes operated solely on the visible light spectrum thus restricting the amount of available information. These telescopes are generally called optical telescopes. It was not until the mid-1900s that telescopes capable of operating in different EM wavelengths were developed.

Not all telescopes are located on the earth’s surface. Yes, that’s correct. A number of advanced telescopes are, in fact, orbiting around the earth in space. These space telescopes gather light with wavelengths that are, either partially, or completely blocked by the earth’s atmosphere.

Optical telescopes gather light from the visible wavelength (visible to the naked eye) of the electromagnetic spectrum. They are the oldest and most commonly used telescopes in the world. Perhaps the most important feature of an optical telescope is its light-gathering power, which is a lot higher than that of the human eye.

Optical telescopes can be categorized into three broad categories; refractor, reflector, and catadioptric optical designs. Each has its own pros and cons and have different uses in astronomy.

Refracting or dioptric telescopes are a type of optical telescopes that employ lenses (instead of mirrors) to create an image. Every refractor also features some kind of eyepiece that allows the telescope to gather more light than the naked human eye.

Based on the design, refracting telescopes can be classified into four types – Galilean telescope, Keplerian telescope, Achromatic and Apochromatic refractors.

While they still cannot produce the ‘perfect‘ image, reflectors are used in almost every other research telescopes due to its physical merits.

Much like refractors, reflecting telescopes can be divided into three broad categories based on design – these are Gregorian, Newtonian, and Cassegrain telescopes. Several subtypes and specialized extensions are also there.

The third and lesser-known type of optical telescope is the catadioptric telescopes. They combine the elements of reflective and refractive telescopes to create a hybrid optical system. While such optical system is generally used in vehicle headlights, certain types of telescopes and astronomical cameras also employ this setup.

Since the radio signals we receive from most astronomical bodies are weak, radio telescopes require large antennas to gather enough data for astronomers to conduct their research. In some cases, several radio telescopes are electronically linked to each other significantly increasing their field of search (radio Interferometry).

Since most radio frequencies are able to penetrate the earth’s atmosphere, there is no need for space-based radio telescopes. However, they can potentially assist ground-based ones.

Some of the frequency bands currently used by radio telescopes are-

Commercial use of these frequencies is banned in many nations for performing radio astronomy.

In radio interferometry, radio signals captured by multiple antennas over a large area are combined together in order to maximize the overall resolution. This technique was introduced back in 1946.

Solar telescopes, formerly known as photoheliograph, are specifically designed to observe the sun at near-infrared and UV wavelengths. Unlike most other types, solar telescopes can only operate during day time and are usually located on top of a tall, white structure. 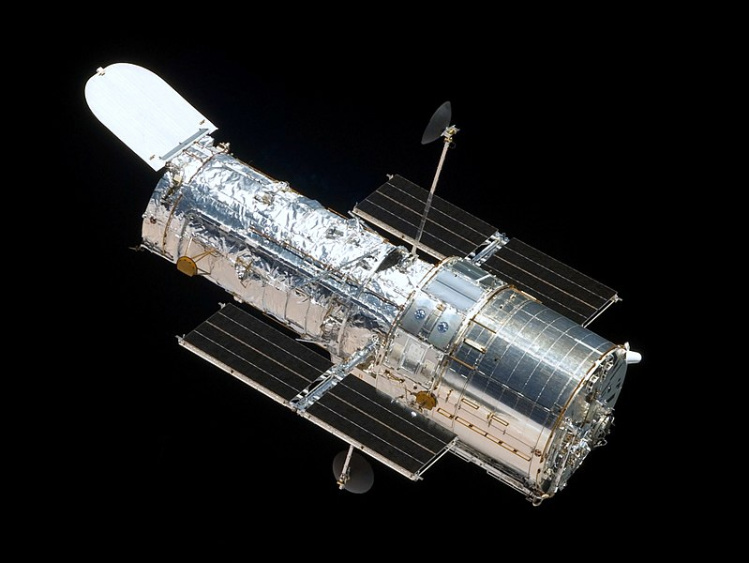 It all started back in the early 1920s, when physicist Hermann Oberth, K. Tsiolkovsky, and Robert Goddard, the three founding fathers of astronautics, pondered upon the idea of a space-based telescope that could be sent into Earth’s orbit by a rocket. This was the beginning of the era of a new class of telescopes.

Then in 1946, theoretical astrophysicist Lyman Spitzer of Princeton University elaborated the advantages of such an instrument and how a space-based telescope can completely eliminate Earth’s atmospheric turbulence from telescopic observations.

A space-based telescope is a scientific instrument that observes astronomical objects and performs other studies from outside the earth’s atmosphere.

Unlike ground-based telescopes, space telescopes offer more accurate observations since they are free of any atmospheric turbulence and radiation distortion. Below are the different types of space telescopes. 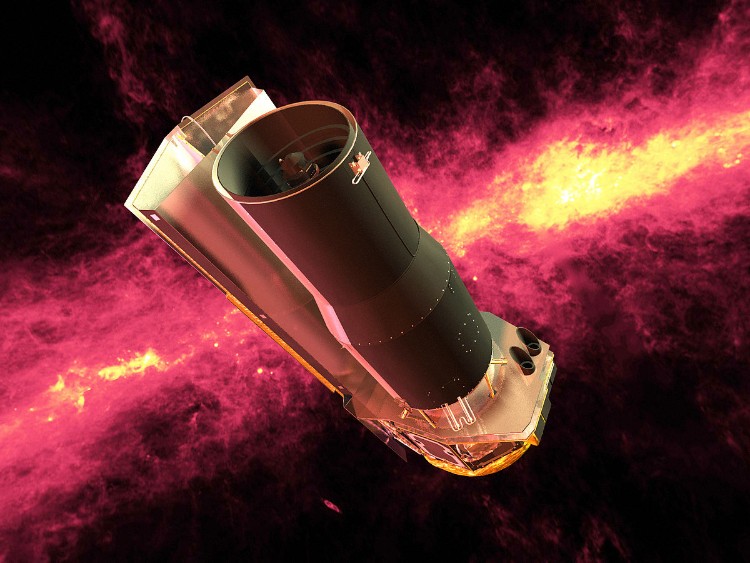 Infrared astronomy is an important branch of modern astrophysics. Since most of the infrared radiation is blocked by the Earth’s atmosphere (relatively smaller wavelengths can make it through), many infrared telescopes are space-based.

The infrared telescopes can detect far off astronomical objects in the dusty regions of space. They also play a crucial role in studying the early state of the universe. However, unlike most of the other wavelengths, observation in infrared frequency is a bit tricky since every hot body emits infrared radiation.

In order to cope with that problem, infrared telescopes are fitted with special cameras that are constantly kept at cryogenic temperatures (below −150 °C) and are coupled with solid-state detectors.

NASA’s legendary Spitzer Space Telescope is one of the most important infrared space-based telescopes to date.

Our earth’s atmosphere blocks most of the harmful radiation from entering the Earth. This includes ultraviolet rays. Due to this reason, radiation at ultraviolet wavelength can only be observed from space.

Ultraviolet astronomy allows researchers to study distant stars and galaxies more closely. Most stars emit radiation in the near-infrared or visible wavelengths, thus they appear insignificant when seen in ultraviolet light. Only the stars that are either in their early or late states of evolution and are much hotter, would be visible. As a matter of fact, every hot astronomical object emits UV radiation.

The first-ever space telescope capable of observing the UV spectrum was the Far Ultraviolet Camera/ Spectrograph, which was deployed on the lunar surface by the Apollo 16 mission in 1972.

NASA’s Far Ultraviolet Spectroscopic Explorer or FUSE and Swift Gamma-Ray Burst Emission are two of the most prominent examples of UV telescopes.

The core component of an X-ray telescope is its mirrors (either focusing or collimating) that gather radiation and project them on specialized detectors. X-ray telescopes with focusing mirrors need long focus, i.e., the mirrors must be a few meters from the detectors.

Since the 1960s, almost fifty X-ray telescopes have been launched into space. The first prominent X-ray satellite, Uhuru, made extensive studies of Cygnus X-1 and other prominent X-ray sources. NASA’s Chandra X-ray Observatory launched in 1999 was a breakthrough in the field of X-ray astronomy.

Chandra is 100 times more sensitive to weak X-rays than any other telescope before its launch. This was possible only due to the higher angular resolution of its mirrors. Other noteworthy X-ray observatories are NuSTAR (Nuclear Spectroscopic Telescope Array) and the Japanese Hitomi satellite. 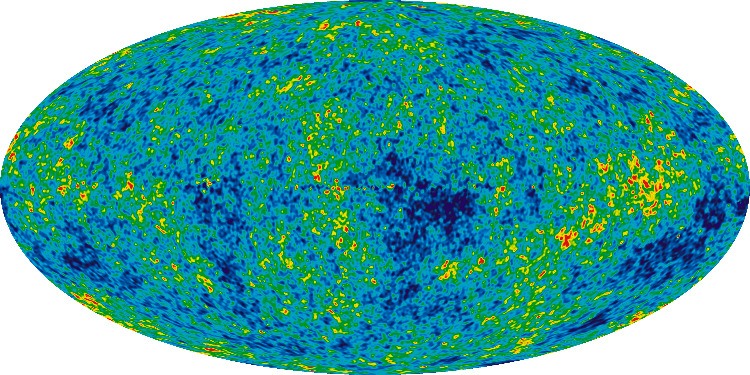 All Sky map of CMB. Based on Nine years of data from WMAP | Image Courtesy: NASA

Like X-rays and ultraviolet radiation, Earth’s atmosphere absorbs most of the radiation at microwave wavelength, so astronomers have to rely on space-based microwave observatories and telescopes to study the cosmic microwaves.

Cosmic microwaves or cosmic background radiation are the oldest electromagnetic radiation in the universe; the remnants of the Big Bang. While microwave space telescopes are generally used to study the cosmology of the early universe, they can also observe Synchrotron radiation and other phenomena.

Gamma-rays are the most dynamic form of electromagnetic radiation. While low energy gamma-rays (in MeV range) are produced by solar flares, high energy gamma-rays (GeV) on the other hand, are only generated by extreme events outside our solar system such as a superluminous stellar explosion, etc., therefore gamma-rays are important for various extra-galactic studies.

However, they are much more difficult to observe than X-ray waves. In fact, there is no specialized gamma-rays telescope exist to date. Instead, astronomers use secondary means to detect gamma-ray flux in the sky, i.e. Cherenkov light.

Though the earth’s atmosphere act as a barrier for gamma-rays, in many cases they can be observed from multiple ground-based observatories including HESS, HAWC, and VERITAS.

Currently, there are only five operational space-based telescopes observing gamma-ray frequency. NASA’s Swift explorer, which was launched in 2004, detects mysterious gamma-ray bursts from all over the universe. Another NASA observatory Fermi is specially designed to observe high-energy bursts from pulsars and black holes.

While most space-based satellites only observe or listen to a specific wavelength, there are a few multi-wavelength telescopes that can gather information from more than one section of the electromagnetic spectrum simultaneously. The Hubble Space Telescope is a perfect example of such telescopes. It can observe near-infrared, visible light, and ultraviolet frequencies. 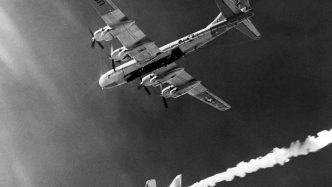