22 Exceptional Glass Buildings From All Over The World

In the wake of 20th century, the new and modern architecture emerged into the main scenario which only became more dominant after the World War 2. The modern architecture or modernist architecture is basically bold and audacious use of glass, steel and reinforced concrete. It brought a radical change in the architectural world, practicing modern styles at the expense of traditional classical architecture that were popular in the 19th century. We with the admiration of our readers and fans, assembled the list of astonishing glass buildings from all over the world.

Quito canton is a metropolitan district in the province of Pichincha, Ecuador. As most of the provinces in the country, Pichincha is also covered with La Sierra or the highlands. The project X House by Arquitectura X in Quito Canton takes the concept of valley house to the next level.

The X House is a two-story rectangular building with glass covering floor-to-ceiling across two levels. While it has shorter side walls, its ceiling and floors are wood and metal, and its front and rear sides are entirely transparent. Build over a space of 380 sq.m, living here would be like living in an open ended box.

Inspired by the Farnsworth House, the Glass Houseboat by X-Architects is a sophisticated approach to a sea-faring abode. The fundamental structure of the floating home is based on two catamaran beams made of stainless steel and glass. The basic layout of the structure includes a kitchen, a living room and a casual dining area in the upper deck and bedrooms, bathroom and steering cabin located in the Lower deck. It also has a terrace with spiral staircase access that can be used as a sun deck.

Although, the building is not made of remarkable amount of glass, but it still deserves to be on the list. The Wisconsin Institution of Medical Research at the University of Wisconsin-Madison (WIMR) is a modern design building, significant for extensive uses of large glass panels to maximize natural light intake. The illumination of natural light through the structure creates a bright setting and provides a more open atmosphere to the building. 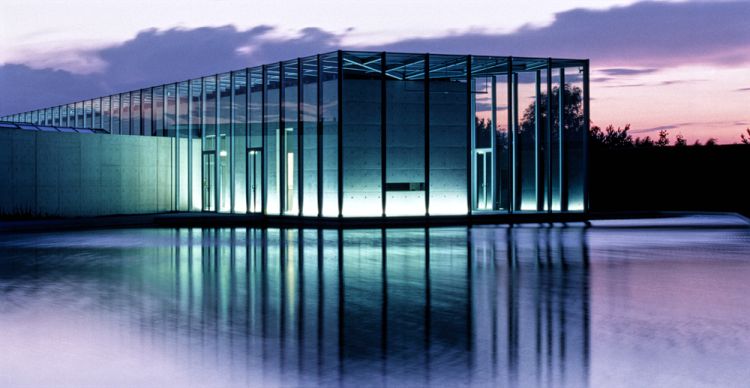 The Langen Foundation is a museum of oriental and modern art, situated near Neuss, North Rhine-Westphalia in Germany. The museum is built on the grounds earlier used as the NATO rocket base. With a total area of 900 m², the structure mainly consists of glass, steel and reinforced concrete. Tadao Ando, the creator of this museum is a self taught Japanese architect who is famous for the “haiku” effect that is emphasizing nothingness and empty space to represent the beauty and simplicity.

The Glass House, also known as Johnson house, is a historic house museum situated at 798-856 Ponus Ridge Road in New Canaan, Connecticut. Built in 1949, it was designed by Philip Johnson as his own residence. There is a common belief that the idea was taken from “the Farnsworth House” at least according to Alice T. Friedman. The estate also includes other buildings designed by Johnson during his career. In 1997, it was given the status of a National Historic Landmark.

17. Bloch Building at The Nelson-Atkins Museum of Art

The Nelson-Atkins Museum of Art is situated in Kansas City, Missouri which is famous for its neoclassical architecture. In 1993, a new structure was added as part of an expansion plan. The new addition was designed by architect Steven Holl. In 2007, Time magazine ranked the museum’s new Bloch Building number one on its list of “The 10 Best Architectural Marvels” from around the globe.

Designed by architect Ludwig Mies van der Rohe in 1945 and completed in 1951, the Farnsworth House is one of the iconic structures in America, located near Plano, Illinois, along the Fox River. The Farnsworth House is recognized internationally as a notable example of modern and domestic architecture. It continued to be a private residence for over 50 years until Landmarks Illinois and the National Trust for Historic Preservation purchased it in 2003. 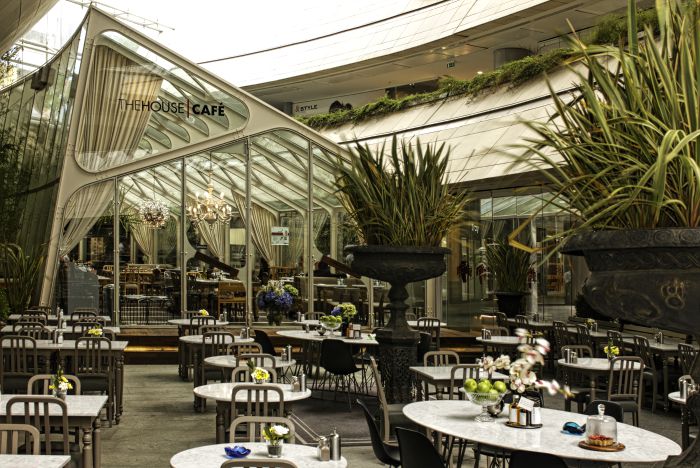 The House Cafe is one of the biggest outlets in Turkey. With the collaboration of Autoban, a Turkish design firm, they have successfully built a unique coffee shop for unmatched dining experience for coffee lovers. Situated in Kanyon mall in Turkish capital Istanbul the cafe reflects creativity and innovation.

The structure is entirely made of steel and glass, which is integrated into the mall’s original architecture. It is carefully planned and designed to fit the valley-like architecture of the mall. So make sure whenever you travel to the beautiful city of Istanbul, you visit this cafe, especially if you are a Coffeephile. 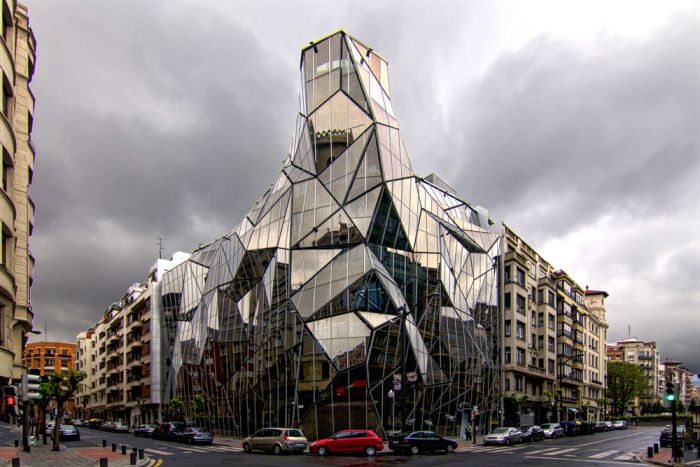 Well, not only the art galleries and museums are entitled to have fancy buildings. And the best example is situated in the city of Bilbao in Basque country, Spain. Spread over a total area of 9,200 sqm, the Basque Health Department Headquarters designed by Coll-Barreu Arquitectos is one of the iconic buildings in Spain. As it is noticeable, the building is no way near a typical hospital. Its revolutionary polyhedral glass facade gives it a very unique and mesmerizing appearance from inside as well as outside. 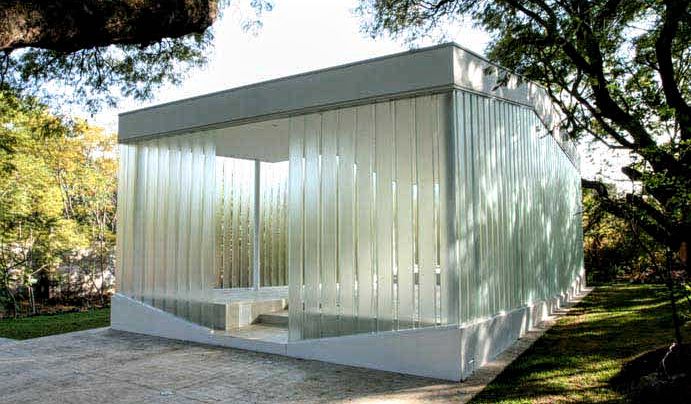 The famous La Estancia Chapel is located in the town of Cuernavaca, an hour to the south of Mexico City. Designed by Bunker Architects, La Estancia Glass Chapel of Cuernavaca is a powerful example of how glass can be used to construct a traditional Mexican baroque colonial style Chapel. 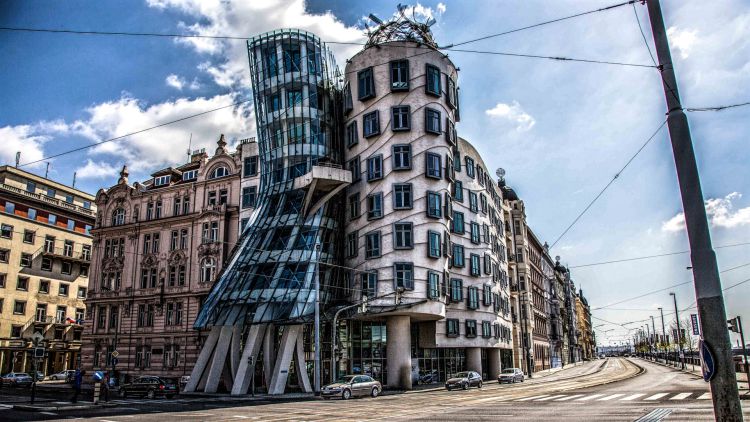 The Dancing House is an unofficial nickname given to a popular building on the Rašínovo nábřeží (Embankment) in Prague, Czech Republic. The building was designed by the Croatian-Czech architect Vlado Milunić along with Canada born American maestro Frank Gehry. At the time of completion, it faced severe criticism nation wide due to its non-traditional and unorthodox design. It was Gehry, who named the building Fred and Ginger after the legendary American dance couple Fred Astaire and Ginger Rovers. 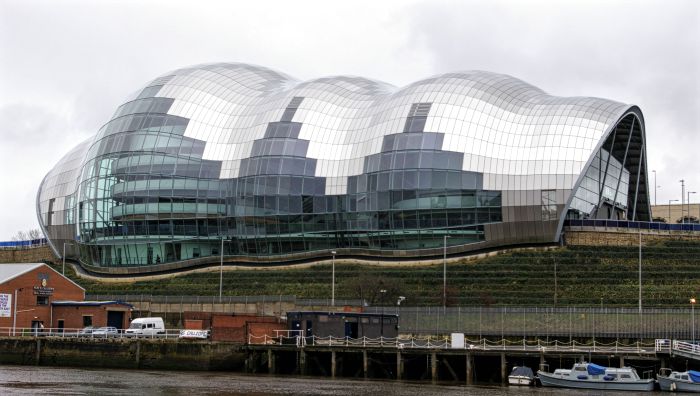 Sage Gateshead is a modern venue for performing arts and musical education. It’s located on the Gateshead on the south bank of the River Tyre, North of England. Since its inauguration in 2004, many memorable concerts were organized here with famous artists who performed at the venue, including James Brown, Crosby, Above and Beyond to name just a few. 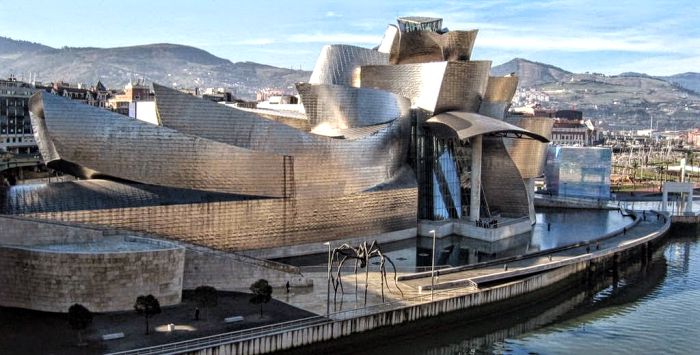 One of the most admired works in contemporary architecture, the Guggenheim Museum Bilbao is a museum of modern and contemporary art. It is one of the largest museums in Spain and named in the list of the most important works completed since 1980 in World Architectural Survey of 2010.

The building is a perfect blend of titanium, glass and stone. The interior is designed around a large, atrium with decent views of Bilbao’s estuary and the surrounding hills. The atrium, also known as ‘The Flower’ mostly because of its shape which also serves as the organizing center of the museum. 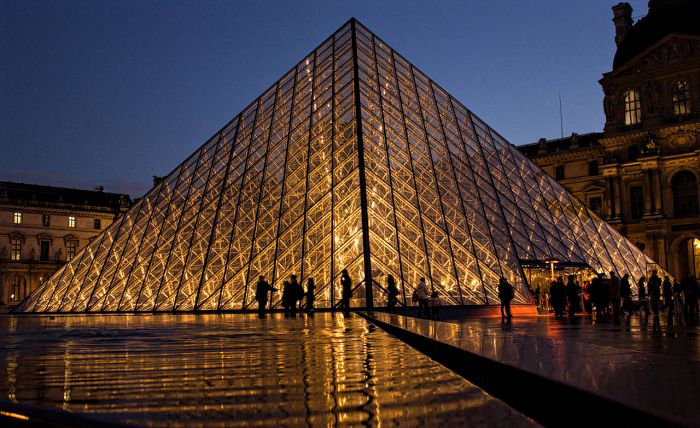 Pyramids have been built by civilizations in different parts of the world. They are an integral part of our long and illustrious history. Apart from the great Egyptian pyramids, there is unique and one of a kind pyramid exists in France. The Louvre pyramid is constructed entirely with glass segments and metal poles and placed in the main courtyard of the Louvre Palace (Palais du Louvre) in Paris.

Well, it may not share the same fame as of the likes of Pyramid of Giza, but its architectural ingenious surly gather admirers from all over the world every year. The Pyramide du Louvre was designed by a Chinese-American architect Ieoh Ming Pei in 1989. 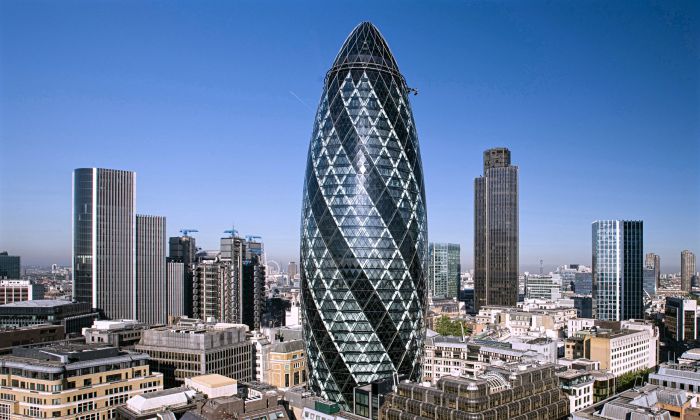 The Gherkin (informally), previously known as the Swiss re Building is one of the significant buildings in London’s primary financial district, the city of London. The building now stands on the former sites of the Baltic Exchange (24-28 St Mary Axe).

The bombings of 1992 by the IRA or PIRA in London caused severe damage to the historic building, forcing the government to plan and construct a new and higher (92 storey) exchange center designated as the Millennium tower. But it was soon dropped because of its impracticality.

The new building is 180 meters high and with 41 storey it has become London’s most widely recognized examples of contemporary architecture. 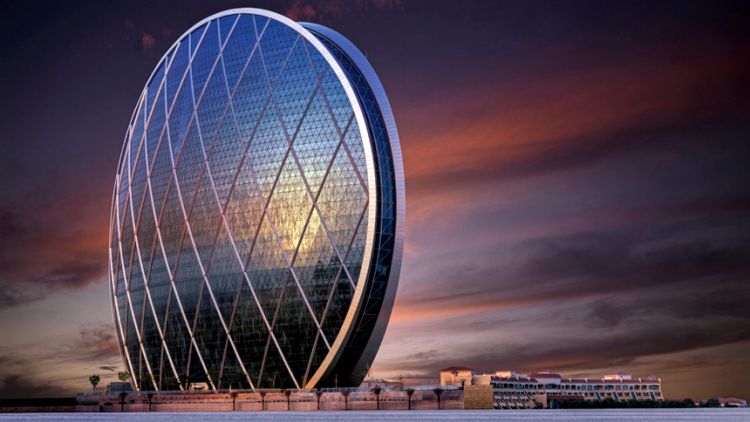 The Aldar headquarters building is one of its kind circular building located in Al Raha, Abu Dhabi (emirates), United Arab Emirates. The shape of this building is achieved through the use of a structural diagonal grid of steel. It is believed that the shape is largely inspired by ancient Greek temples (tholos). The circular design represent unity and stability. It is also the symbol of infinity, without beginning or end, perfection.

6. The Glass Home by Carlo Santambrogio 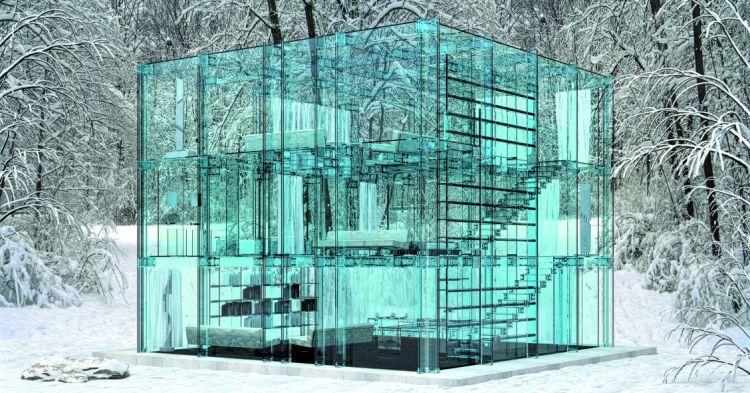 The transparent housing concepts by Santambrogio milano are designed to be built almost anywhere around the world. The ‘snow house,’ as the name implies, are generally meant to be in colder climates and with thicker glass panes, capable of withstanding larger loads, namely from the snow, and will help insulate the interior. The entire glass building is normally covered in 6 millimeter blue tinted glass panels. Even the furniture and fixtures are made from glass.

5. Netherlands Institute for Sound and Vision 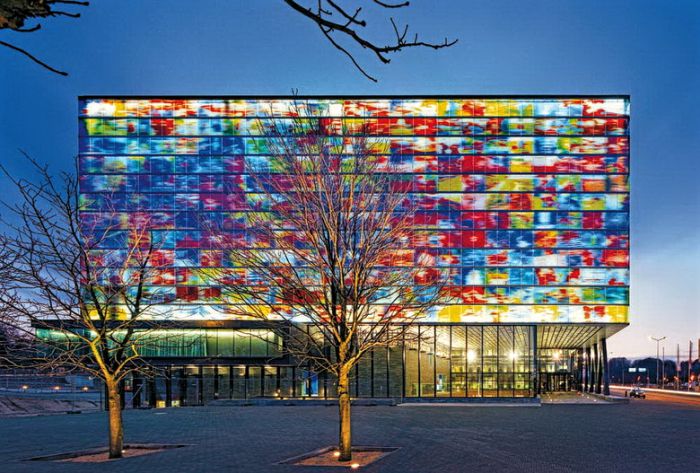 The Netherlands Institute for Sound and Vision is a cultural-historical institution situated in the city of Hilversum, Netherlands. It collects and preserves the audiovisual heritage of the country from different sources such as media professionals, television shows, education, science and the general public.

Moreover, the Institute develops and spread knowledge in various areas of audiovisual archiving, digitization and media history. The structure was designed by architects Willem Jan Neutelings and Michiel Riedijk, is one of the most colorful and dramatic glass buildings in the world.

4. Sports and Leisure Center in Saint-Cloud 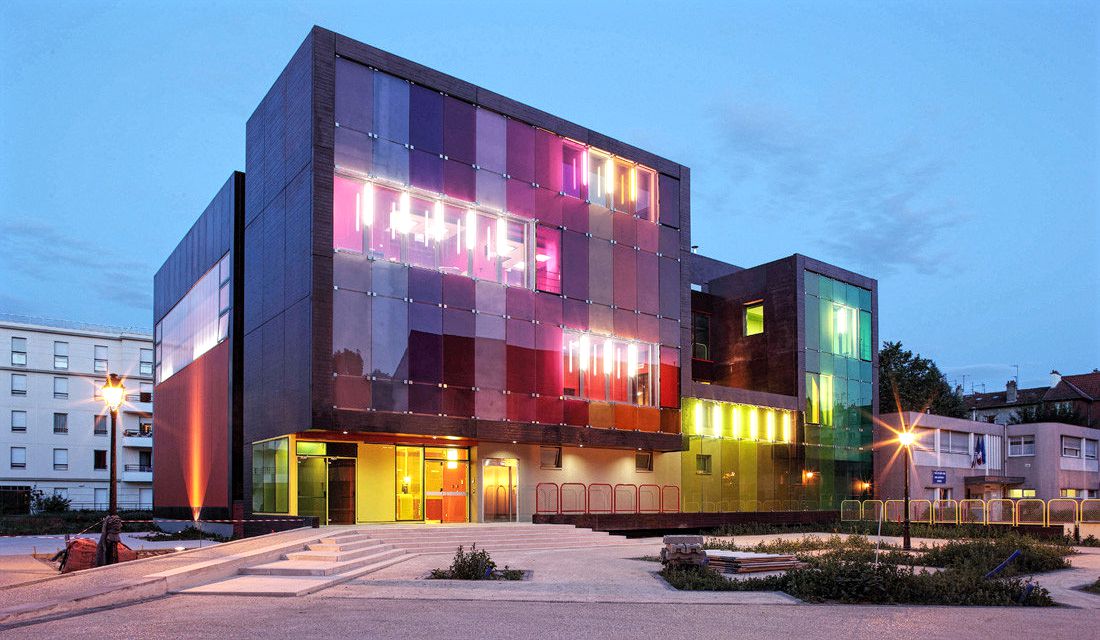 The Sports and Leisure Center, located in Saint-Cloud France, is an impressive glass building which blends bold colors and a modern cubism design, yet is highly usable and valuable space. Designed for the youth of Saint-Cloud, KOZ Architects created this space to be fun, and utilized maximum space for the different sports facilities inside.

The Kanagawa studio in Japan is about the closest you can get to the feeling of working outside while actually being indoors. The floor-to-ceiling glass makes the building appear weightless and elegant. Completely transparent studio and workspace allow students to feel the nature and the uninterrupted space.

Recommended: 10 Most Futuristic Building Designs in the World

2. The Botanical Garden of Curitiba 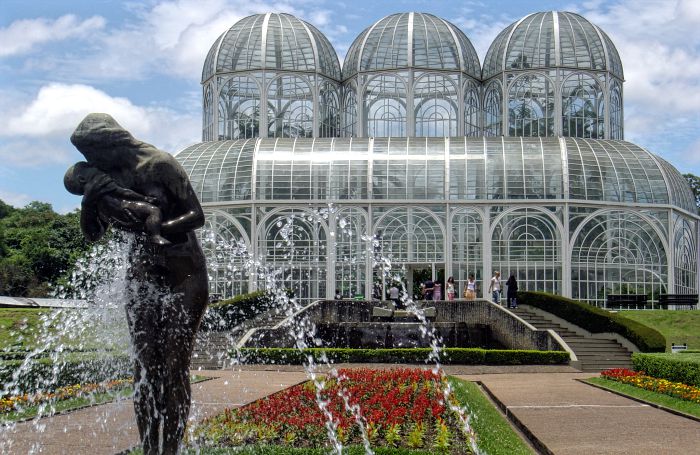 The Botanical Garden of Curitiba or Jardim Botânico de Curitiba (Portuguese) is located in the city of Curitiba, the Capital of the state of Parana. The Botanical garden is created in French style gardens amid fountains, waterfalls and lakes. The principle greenhouse is a metallic structure of art nouveau style and is highly inspired by the mid-19th century Crystal Palace in London.

The National Grand Theater is one of the few finest examples of modern architecture in China among the ancient traditional Chinese buildings. The National Grand Theater or NCPA is a multi-functioning theater situated in Beijing near the Tiananmen Square and the Great Hall of People. The building is entirely made up of titanium-accented glass and is surrounded by a man made lake from all sides. It was designed by architect Paul Andreu as an iconic feature that would be easily recognizable. 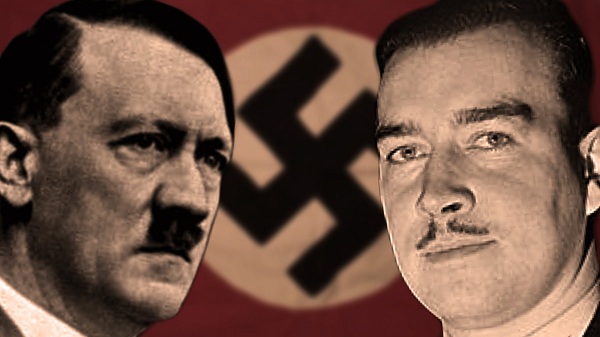 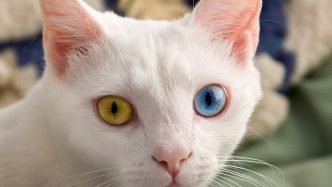