Observing space in the terahertz frequency range (100 GHz – 10 Thz) could help astronomers better understand the physics and chemistry of the star and planet-forming regions.

The terahertz waves (whose wavelengths have a much longer range than infrared) can unveil processes hidden behind dusty gas clouds. Although modern space-based telescopes are capable of making observations in the terahertz frequency range, they require high energy (in microwatts) to operate.

Recently, a research team at the Chalmers University of Technology in Sweden has shown that a few materials can be used in such telescopes to enable fast terahertz and ultra-sensitive detection. They have engineered graphene (a single layer of carbon atoms) that can revolutionize space telescope technology.

Graphene has unique properties that set it apart from other materials. For example, graphene has a much lower density than steel but it is nearly 100 times stronger than the strongest steel. Also, it efficiently conducts electricity and heat and is nearly transparent.

In this study, researchers were able to achieve a Dirac point in graphene by arranging electron-accepting molecules on its surface. The outcomes show that graphene can perform incredibly well as compared to any other superconductor: when doped to the Dirac point, the material can be efficiently used for THz heterodyne detection.

1) The first signal is a high-intensity wave produced by a local oscillator.
2) The other one is a weak THz signal which behaves like waves coming from space.

Graphene combines both signals and generates a new wave at a much lower frequency (GHz) known as the intermediate frequency. This resulting wave can be examined with conventional low noise gigahertz instruments.

The bandwidth of the detector (necessary to precisely detect motions of celestial bodies) is directly proportional to the intermediate frequency.

Theoretically, the graphene-based detector can achieve spectral range between 1 and 5 THz. The bandwidth can reach more than 20 GHz, which is much more than what existing technology has to offer.

Researchers believe that a large matrix of graphene THz detectors would be able to measure terahertz signals down to single-photon scale and frequency down to 1/10 million.

This could enable imaging of large regions of nearby galaxies and star-forming clouds, in shorter times. Moreover, the technology could be extremely useful for future space projects aimed at revealing how oxygen, carbon, water, and life originated on Earth. 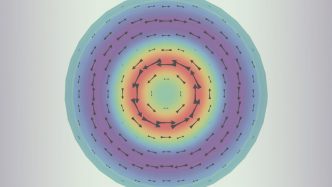