Humans have been looking into space for centuries in search of distant stars and planets. If you’re curious, the furthest we have seen is a galaxy 13.4 billion light-years away captured by the Hubble Telescope in space.

Along with seeing massive bodies that are billions of light-years away from Earth, it’s also important to observe things in details. Researchers at the University of Toronto have done something similar.

They have performed the highest astronomical resolution observation of 2 extreme regions of radiation around a star 6,500 light-years away. These two regions are only 20 km apart. To put this into context, it’s equivalent to seeing an insect on the Pluto’s surface through a telescope on Earth.

This was made possible by the unusual characteristics and arrangement of a binary star orbiting each other. One is fast-spinning neutron star called a pulsar, whereas the other is cool, small star called a brown dwarf.

A pulsar is a magnetized neutron star that rotates at extremely fast speed — nearly 700 times per second — emitting a beam of electromagnetic radiations from 2 hotspots on its surface. The radiation can be detected only when the beam is pointing toward our planet.

On the other hand, brown dwarf is a lightest star that doesn’t sustain nuclear fusion of hydrogen to helium in their cores. In this research, brown dwarf is about 2 million km from the pulsar, orbiting around it in approximately 9.2 hours.

Artistic impression of Dwarf (surrounded by a cloud of gas) and Pulsar (in the background) | Credit: Dr. Mark A. Garlick

Like Earth’s Moon is tidally locked (same side of the Moon always faces the Earth), the dwarf star is tidally locked to the neutron star. And since both stars are close to each other, the brown dwarf experiences strong radiation coming from the pulsar.

This intense radiation heats one side the dwarf star (while the other side remains cool) to over 6,000 degree Celsius. This is even hotter than the surface of our Sun (5,500 degree Celsius). This could eventually result in death of dwarf star.

Sometimes these types of pulsars are called ‘black widow’. Like black widow spider kills and eats its mate, pulsar gradually erodes all the gas from its companion star.

When lensing events occur, the observed radio flux is increased by factors between 70 and 80 at particular frequencies. The strongest events affect wider interpulse and narrow main pulse differently.

Astronomers have demonstrated that these events occur naturally via density fluctuation in the outer regions of the outflow. They inferred resolution of lenses which is comparable to the diameter of the neutron star – about 20 km.

Along with providing an incredible high resolution of pulsar (PSR B1957+20) in a binary system, this study also offers a useful data to understand mysterious Fast Radio Bursts coming from distant neutron stars.

The future studies can precisely calculate the mass of the pulsar, which will help us better understand the behavior of matter at highest densities and what exactly happens within neutron stars before they collapse into a black hole. 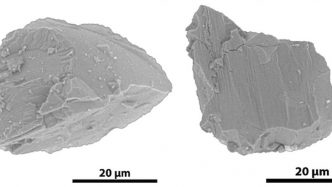