How Loud Sound Can Get Underwater?

Sound is defined as a longitudinal wave created by compressions and rarefaction within the air. Its maximum possible amplitude is limited by the capacity of the transmitting medium to sustain the pressure peaks.

In gases, for instance, the sound is limited at the high peak by the condensation pressure and at the low peak by absolute zero pressure. Since liquids and solids can support negative pressures or mechanical tension, the low-pressure peak in condensed materials can have absolute negative values.

The highest possible sound amplitude in liquids is usually limited by cavitation at negative pressures. Recently, scientists at SLAC National Accelerator Laboratory were able to produce an astonishingly loud sound underwater, so loud that it can easily eclipse the sound of a rocket launch. The intensity of the sound was equivalent to converging the electrical power of the whole city onto a compact area of one square meter.

This shockwave generated numerous other similar shockwaves, as it traveled through the jet, forming a ‘shockwave train’ that alternated between low and high pressures.

Once the underwater sound intensity goes above a specific threshold, the water splits into tiny bubbles [filled with vapor] that collapse immediately. The pressure generated by the shockwave train was slightly below this threshold value, which means that it was at the loudest possible sound underwater.

How Loud Was It?

The characteristic geometric pattern of the shockwave was related to structures of supersonic gas jets. The initial peak pressures of completely developed waves varied from –24 MPa to 100 MPa, exceeding the tensile and compressive strengths of several materials. It produced 270 decibels of sound pressure levels and 1GW/m2 of sound intensities.

The findings could help scientists better analyze shock damage and tensile failure in soft materials embedded in liquids, at atomic resolution (nanosecond and picosecond dynamics). Waves generated in this experiment also provide a new system to study cavitation in liquids.

Moreover, it could advance research in various fields, especially in materials science and biology, leading to more efficient materials and more effective drugs. 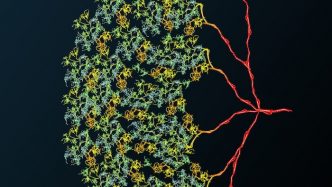