The ability of light to exert forces and torques is one of the key features of optical manipulation of materials. To make this manipulation stable, the source must exhibit a strong enough trapping potential.

In the last couple of decades, scientists have come up with numerous approaches for light-based mechanical manipulation, most notably optical tweezers that uses radiative pressure from a laser beam to move and manipulate tiny objects. This method formed the basis for the 2018 Nobel Prize in Physics.

Nowadays, scientists have been focusing on levitation dynamics in optomechanical systems for realizing quantum mechanical superposition and ground-state cooling.

Most of the existing techniques, however, can only manipulate microscopic objects at very short distances. It’s like levitating a ping pong ball using a stream of air from a hairdryer. It wouldn’t work if the ball was too heavy, or if it was too far away from the hair dryer.

Recently, researchers at the California Institute of Technology revealed a method that can be used to manipulate objects of different sizes and shapes with a light beam. The theoretical feat relies on unique nanoscale patterns engraved on the light-propelled object’s surface.

The unique nanoscale patterns interact with light in a manner that the object can balance itself in the air, generating a restoring torque to keep it in the beam. These patterns are capable of encoding their own stability, eliminating the requirement of highly focused laser beams. In fact, the light source can be millions of kilometers away.

This self-stabilizing optical manipulation of macroscopic objects could be obtained by controlling the anisotropy of light scattering along the surface of the object.

Researchers looked for asymmetry in the optical response to ensure that a restoring torque can be produced for a structure that is displaced from its equilibrium orientation. They emphasized on creating an appropriate response as a collective effect and developed a group of nanophotonic elements that can exhibit passive self-restoring dynamics.

Though still theoretical, the technology can be used to develop light-powered spacecraft that could visit planets outside our solar system. That’s a long way to go, but researchers are currently testing out the principles.

The spacecraft could be etched with special nanoscale patterns and powered/accelerated by an Earth-based laser beam. They would be able to reach relativistic speeds and possibly visit distant stars, without carrying any fuel.

But before this light propulsion theory is used to power spacecraft, it could boost the manufacturing of smaller objects like circuit boards. 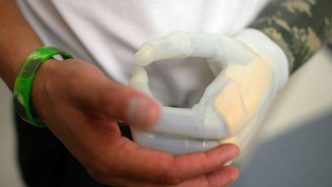 New Electronic Skin Can Have Human-Like Sense of Touch