For years, scientists have been studying how the matter undergoes a phase change, like freezing or melting. Recently, MIT researchers detected that the light-induced and heat-induced phase change occurs very differently.

Although researchers had long anticipated that this could be the case, the process hasn’t been recorded until now. This study will deepen our understanding of physics and enable scientists to utilize the mechanism to develop new types of optoelectronic instruments.

To precisely mimic the attributes of a crystalline solid, they used charge density wave (an electronic analog) rather than a real crystal-like ice. Typically, the structure of crystal melts uniformly, but when you induce ultrafast laser pulses in the charge density wave, it melts in a different way: the phase changes produce several singularities in the material called topological defects, which affect the electrons’ dynamics and lattice atoms in the material.

To catch the melting process in action, researchers used ultrafast-speed and precise measurement methods. The picosecond-long laser pulse, for instance, simulates the quick phase changes.  Quenching is one of the most common examples of a rapid phase change, for example, instantly dipping a semi-molten red-hot iron into the water.

The light-induced phase transition process is way different than how the matter changes through gradual cooling or heating, where it gets sufficient time to attain equilibrium at each phase of the temperature change.

They used three methods together to record the behavior of the laser pulse in real-time.

LaTe3 (a substance containing lanthanum plus tellurium) is used to host charge density waves. All these equipment together allowed researchers to trace the motions of atoms and electrons within the matter as they responded to the intense pulses of laser light.

The technology makes it possible to watch and make a video clip of atoms and electrons as the charge density waves melt and then resolidify. In this study, the authors confirmed the existence of topological defects similar to small vortices that arise in liquids.

They discovered that the process of resolidification isn’t uniform: it happens in multiple timescales. Moreover, the charge density wave’s amplitude/intensity recovers faster than does the lattice orderliness. Overall, the time-resolved methods used in this research have provided an exceptional view.

The outcomes are very crucial for condensed matter physics and for discovering novel compounds, even if they exist only for a trillionth of a second.

In the future, researchers will try to figure out how topological defects can be engineered in a controlled environment. This will help them write and erase defects into the system with light pulses, which could be utilized as a data storage unit. 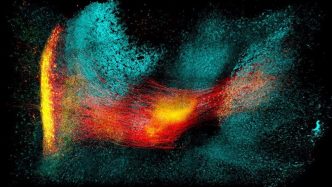