Using MRO (Mars Reconnaissance Orbiter), NASA scientists have found 8 locations where thick layers of ice below the Martian surface are exposed in faces of eroding slopes. These 8 sites have a steep slope of 55 degrees and they tell a lot about the structure of layers of underground ice sheets in middle latitudes of the Mars.

According the NASA, the ice was deposited as snow a long ago. Gradually, the pure water ice covered by layer of 1-to-2 meters thick dust and small rocks. This holds clues about Martian climate history. This would make frozen water much more easily accessible than earlier estimations.

The study benefited from coordinated utilization of Mars’ longevities, exceeding 16 years for Odyssey and 11 years for MRO, as well as numerous equipments on Mars orbiters.

Scientists use ground-penetrating radar equipment on MRO to locate and examine these sites. The locations include both southern and northern hemispheres at latitudes approximately 55-to-58 degrees.

Enhanced-color view (blue) of underground ice at the steep slope, from the HiRISE | NASA

In 2008, the Phoenix lander (robotic spacecraft on Mars) examined the underground water ice at north latitude of 68 degrees. Scientists at NASA didn’t determine how these specific scarps formed. However, if they expose to atmosphere, a scrap would grow taller and wider due to sublimation of ice.

The buried water ice is about 100 meters thick. The CRISM (Compact Reconnaissance Imaging Spectrometer for Mars) of MRO examined a few of the scraps and confirmed that the bright glimpses are nothing else but frozen water.

Previously, scientists used Shallow Radar of MRO to map vast underground ice sheets in Mars’ middle latitudes and estimated that there is about less than 10 meters thick dirt layer above the frozen water sheets. However, the radar technique didn’t have enough resolution to measure it precisely. 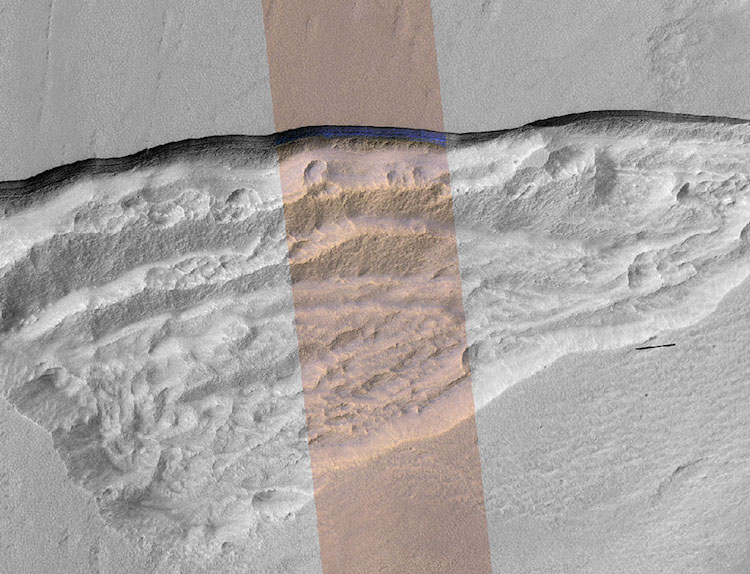 Today’s research confirms indication from neutron spectrometer and fresh crater observations that in some locations, water ice layer starts within just 1 or 2 meters of the surface.

The vertical structure of the buried frozen water looks simple. Dust content and ice with small rock occur at shallow depths as small as 1 meter and extends to many tens of meters in depth. Although ice might be capped by thin cover of lithic material, the veneer can’t be precisely distinguished from vast ice with a superficial lag.

In a few cases, the color of scrap doesn’t indicate ice at the shallowest depths. However, textures are continuous across the ice unit. Variations in the apparent depth to frozen water could arise from debris covering the uppermost ice and from true heterogeneity in ice content.

The scraps stratigraphy may be relevant to other regions with ice-rich deposits, like Utopia Planitiae and Arcadia. The lower latitudes structure will be more complex or have thicker ice-cemented soil due to more frequent unstable conditions and less stability.

Apart from its potential resource, the underground frozen water has scientific value part because it contains crucial evidence about Mars’ climate history. It is part of a story of what happens to Mars water over a very long duration. How much water is in the form of ice? When does it recede? Where does the rest go?

Today, Mars’ axis of rotation is similar to the Earth’s tilted-axis rotation. The buildup of middle-latitude ice is more when Mars tilts more. Over the millions of years, ice and dust possibly deposited with varied proportions under different climate conditions.

As of now, Mars underground frozen water lies under a thin layer over extensive regions, and new study detects 8 sites where humans could essentially just go there with a shovel and bucket and get all the water they need. 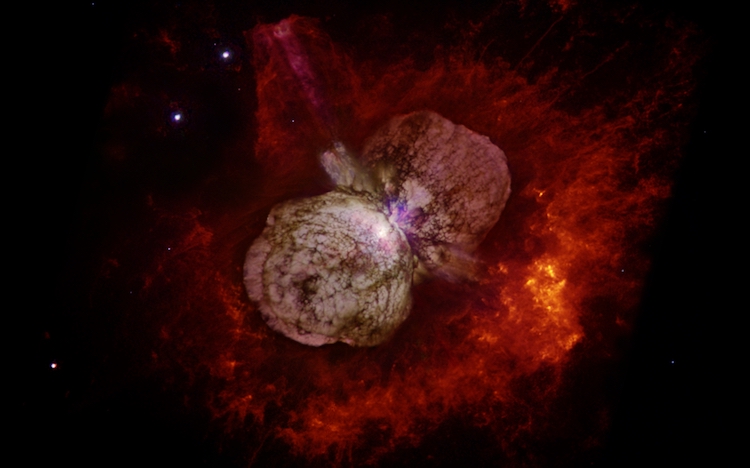