What started by Rasmus Lerdorf in 1994 is now used by more than 80% of total websites in the world. The PHP programming language has been widely ported and deployed on most web serves on almost every platform and operating system, free of charge. Although the language development is focused on server-side scripting, you can do much more with it.

On 30 November, 2017, the PHP development team released a new version 7.2.0, which is a second feature update to the PHP 7 series. Like other updates, it comes with several new features and improvements. We have listed the 8 biggest changes that you will see in PHP 7.2.0. Have a look.

The Mcrypt extension has been removed in this version. According the developers, Mcypt has many design warts and puts a lot of strain on implementors to select the suitable components and wrap them together effectively, which leads to error-prone cryptographic designs and thus insecure applications.

TLC constants in PHP 7.2.0 have been changed to sane values. This will favor strong security, but not backwards compatibility with out of date and version intolerant servers. Moreover, STREAM_CRYPTO_METHOD_TLS_* will be migrated in the future when newer TLS versions are available.

This will break connection attempt to the TLS server with only TLS 1.0 enabled. Also, it will break all ssl:// wrapper connections if the remote host supports only SSL (not TLS).

Scalar types for parameters were introduced in PHP 7. They can also be used for return types for functions. However, you can’t declare that a function must return an object, or either needs to be passed an object as a parameter.

PHP 7.2.0 uses object as a return type and parameter type. All objects pass the type check, so if you pass a value, which is not an object to a parameter (that’s declared as type object), it would fail type check and throw a TypeError.

In the same way, it would throw TypeError if a function is declared as returning object but it doesn’t do the same. Since this would be used internally, object would become a reserved classname, and therefore not available for use as a class name in userland code.

In PHP 5 and later versions, objects are preferred to wrap internal data. Some clod generated the hash extension for using resources. To deal with this error, Hash extension has been migrated to use an object implementation for hash contexts rather than a resource.

PHP 7.2.0 converts the opaque resource to an opaque object to make sure that existing code continue to function unless it checks for is_resource() explicitly. This would also make potential security issues as the internal hash state visible.

Calling count() on object or scalar, which does not implement the Countable interface returns 1. This could hide defects. Consider the code as an example – 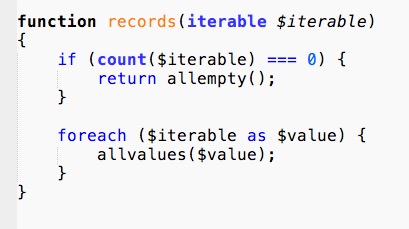 If you pass a Generator that has nothing, it won’t call allempty() or allvalues(), or alert the programmer to the issue. Now you can add a warning while calling count() with a parameter that is null, scalar, or an object that does not implement Countable.

Since calling count() will still return 0 for null, or 1, backwards compatibility is preserved.

PHP now implements Argon2 within the password_* functions, instead of Bcrypt. It’s a modern algorithm that makes your passwords even more strong. Argon2 is developed for highest memory filling rate, and provides defense against tradeoff attacks. It takes 3 different factors into account-

There are 2 versions of Argon2 – Argon2d and Argon2i. Argon2d uses data dependent memory access and is quite faster. It’s more secure against GPU cracking attacks and supports apps with no threats from side-channel timing attacks. On the other hand, Argon2d is tuned for password based key derivation and password hashing.

This issue can be fixed by converting the keys of object or array HashTables, so numeric string property names in objects will be converted to integer array keys, and vice-versa, leaving no inaccessible properties behind.

Although developers have tried to fix this issue many times before, there is a significant performance issue – simply copying a HashTable without performing key conversion is quite faster than making a new HashTable and iterating over all keys in the existing HashTable to manually copy all keys to the new HashTable, converting if required.

In order to deal with the performance issue, the new approach will avoid manually copying the entire HashTable. It will first confirm whether it’s essential, either by checking flags or iterating over the HashTable checking for keys that require conversion.

If there is no need for conversion, it will revert back to zend_array_dup()(which is much faster), or simply copy the reference. Since the approach performs manual duplication where necessary, converting objects with only non-numeric string property names to array and converting arrays with only string keys to objects, face very low performance impact.

If you’re interested in reading complete list of changes, it is mentioned in the Changelog. To get this version, visit their official download page. Also, there is a migration guide available in the PHP Manual.