The floating power plant project named Akademik Lomonosov has been approved by Glavgosexpertiza, Russian State Expert Examination Board. On 9th December 2017, the project was approved by the authority in northernmost city of Pevek, which is funded by the nuclear power plant operator Rosenergoatom, a subsidiary of Rosatom.

Glavgosexpertiza thoroughly examined the submitted materials and concluded that the design documentation and engineering surveys on the facility meet all established requirements and technical regulations. They also stated that the project’s estimated cost is fair.

The Unified Energy System of Russia covers nearly 15 percent of its territory and the most effective way to provide heat and energy to remote areas (occupying half of the Russian Federation territory) is to use nuclear energy.

The floating power plant is 144 meters long in length and 30 meters wide. It has a crew of 69 people and displacement of 21,500 tonnes. It is packed with two optimized KLT-40 naval propulsion reactors that together provide 70 Megawatt of electricity or 300 Megawatt of heat, which is enough for a city with a population of 200,000 people. 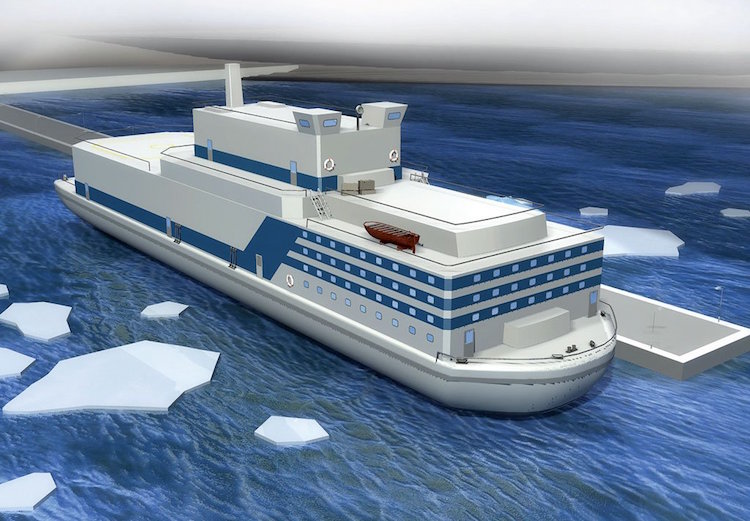 Also, it could be modified as a desalination plant generating around 240,000 m3 every day. Akademik Lomonosov will be fitted with two modified ABC-6M reactors with 18 MWe of electricity.

Both RITM-200 55 MWe and VBER-300 325 MWe reactors have been contemplated as a potential energy source for these nuclear power plants.

These power stations require refueling every 3 years, saving up to 100,000 tons of fuel oil and 200,000 tons of coal every year. With an estimated lifespan of 40 years, the entire plant will be towed home and overhauled at the construction site, every 12 years.

The nuclear waste disposal and maintenance will be provided by the manufacturer and the Russian nuclear industry. Hence, no traces of radiation are expected at the production site.

First proposed in 2007, Akademik Lomonosov was intended to supply power to Severodvinsk, a city in the north of Arkhangelsk Oblast, Russia. However, the government planned to transfer the work to Baltic Shipyard in Saint Petersburg. The total estimated budget of the project is $232 million, and expected to be delivered in 2019.

In October 2017, the cargo to support the power plant was transported to the port of Pevek. It will be towed to Murmansk in mid of 2018, the fuel will be loaded in October and most probably commissioned in November.

The nuclear reactor is supposed to replace the old Bilibino power plant in Chukotka district. The shutdown of this plant will begin in 2019 and will be completed by 2021.

Russia is not the only one; China General Nuclear Power Group (CGN) plans to complete its small modular multi-functional floating reactor construction by 2020. This is the first 200 Megawatt Chinese floating reactor, named ACPR50S, designed to provide electricity, heat and desalination.

The power plant is equipped with a small modular reactor, and is based on generation II+, pressurized water reactor developed by China National Nuclear Corporation (CNNC). It can be used on costal areas or islands, and for gas exploration and offshore oil.

Scientists Develop Holograms That You Can Touch & Hear