Solid-state batteries are one of the promising candidates for next-generation batteries that could provide more safety and high performance at low costs. They can operate at higher temperatures due to their better thermal stability.

The development of materials for solid-state ionic technology has been limited for almost a century. However, there have been tremendous advances in the last couple of decades: more materials were discovered and effective techniques were used for optimizing ionic conduction in solids.

During the same period, researchers came with several fundamental theories for ion conduction in solids, which could make it feasible to store a large amount of utilizable energy in a relatively small volume.

Why We Need Solid State Battery?

The battery we use today in commercial devices is based on lithium-ion technology. They are becoming more popular year-by-year: their growth is driven by the increase in the use of hybrid and electric vehicles as well as the surge in penetration of smartphones and laptops.

Despite their worldwide success, these batteries cannot hide their limitation in terms of safety, form factor, efficiency, and cost due to the underlying technology.

Most of the existing lithium-ion technologies utilize liquid electrolytes, with lithium salts (such as lithium hexafluorophosphate and lithium tetrafluoroborate) in an organic solvent.

However, the decomposition of electrolyte forms a passivation layer called a solid electrolyte interface (SEI). This layer, formed at the battery’s anode material, limits the effective conductance.

The liquid electrolyte requires a liquid-proof casing (to avoid leakage) and expensive membranes to isolate the anode from the cathode. Thus, the design and size freedom of liquid lithium-ion batteries are constrained.

And since these batteries use flammable and corrosive liquids, they have safety and health issues. Many manufacturers remain silent about these downsides.

Solid-state electrolytes can address all of those aspects, especially in wearable, drone, and electric vehicle markets.

What is Solid State Batteries Made of? 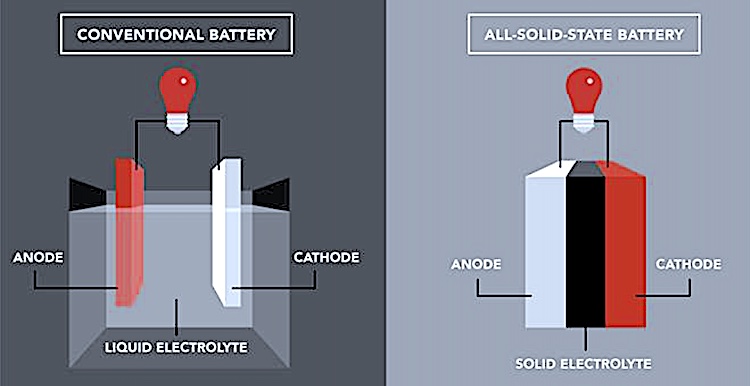 In a solid-state battery, both electrodes and electrolyte are in solid state. The electrolyte can behave like an electrical conductor as well as the separator, eliminating the need for certain components such as casing and separator. Thus, they can be made thinner and flexible.

Since solid-state batteries have no liquid or polymer gel electrolytes, they do not pose a safety risk. They are more resistant to temperature variation and physical damages.

Unlike liquid lithium-ion batteries, solid-state batteries do not generate hydrogen gas due to the absence of flammable substances, which strengthens their operational safety.

These batteries do not form a solid-state interfacial layer, which is why they have low self-discharge rates and multi-year power storage with minimal loss. They can operate up to 100 times longer than traditional lithium-ion batteries.

Moreover, solid electrolytes provide a larger electrochemical window, so high voltage cathode materials can be used. The anode made of high-energy-density metal can further push the energy density beyond 1,000 Wh/kg (watt-hour per kilogram). These benefits could make the solid-state battery a gamechanger.

The working principle of liquid and solid-state batteries are the same. The flow of ions triggers a chemical reaction between the battery’s materials. 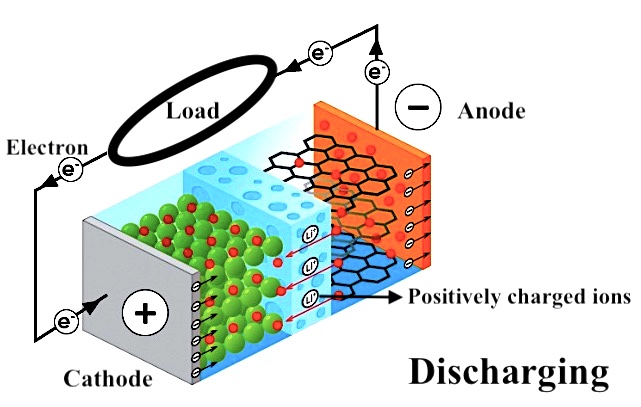 More specifically, when the battery delivers power, positively charged ions move from anode to cathode through the solid electrolyte. This results in the accumulation of positive charge at the cathode that tries to pull electrons from the anode.

But since electrolyte doesn’t allow electrons to travel through it, they have to move across the closed circuit, delivering power to the device it is connected to. 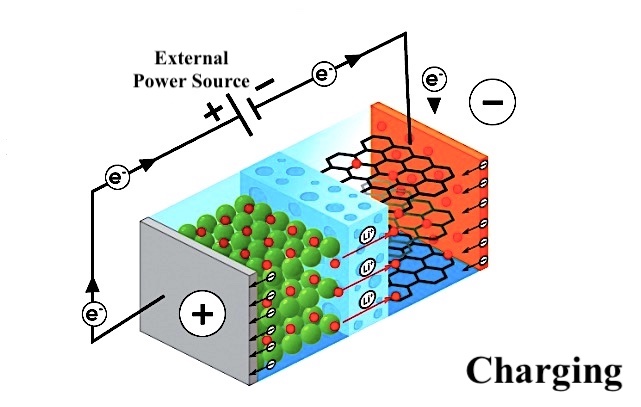 As long as ions travel from one electrode to another, there is a constant flow of electrons, which provides the energy to keep the connected device running.

Lithium-sulfur (L-S) is a promising cathode material. The low atomic weight of lithium and the medium atomic weight of sulfur makes the L-S battery comparatively light. These batteries can have a two times higher energy density (on the order of 500 Wh/kg) than lithium-ion batteries. 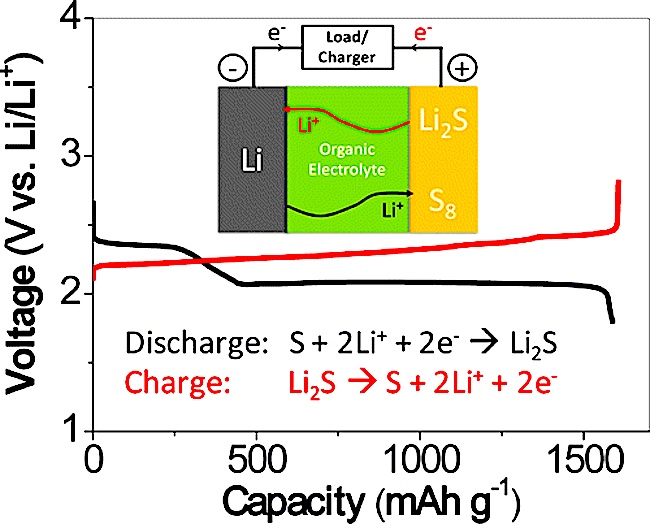 Another promising material for solid-state batteries is Li-O2. It uses oxidation of lithium at the anode and reduction of oxygen at the cathode to produce a current flow. In theory, a Li-O2 battery can offer an energy density of 12 kW·h/kg, which is comparable to the energy density of gasoline (that provides 13 kW·h/kg).

Compared to a lithium-ion, a solid Li-O2 battery can have up to 15 times more specific energy (energy per unit mass.)

So far, solid-state batteries have found use in wearable devices, artificial cardiac pacemakers, and Radio-frequency identification (RFID) tags. Due to their advantages over liquid electrolytes, they offer great opportunities for large cells and electric vehicle applications.

In the past decade, a lot of companies and research institutes have invested tens of millions in manufacturing efficient, rechargeable metal batteries.

In 2017, Toyota announced that it is working on a new kind of battery technology that would make it possible to manufacture lightweight and smaller batteries for electric vehicles. It could potentially increase the total charge capacity, resulting in up to two times longer-range vehicles.

Sakti3, a subsidiary of Dyson Ltd., has described techniques for developing scalable solid-state batteries, using thin-film deposition guided by numerical simulations and optimizations. The company has grown its intellectual property portfolio to more than 100 patents.

John Goodenough, the co-inventor of the lithium-ion battery, has introduced noncombustible batteries made of a glass electrolyte and an alkali-metal anode consisting of sodium, lithium, or potassium. This type of battery can have high conductivity at -20 °C and could perform well in electric vehicles in subzero degree weather.

In 2020, Samsung came up with a new prototype that uses a silver-carbon composite layer as the anode to support a longer cycle life and larger capacity. It is 50% smaller by volume than existing lithium-ion batteries and would enable electric vehicles to travel up to 500 miles on a single charge.

Fisker Inc., an electric vehicle automaker, has filed several patents related to solid-state battery technology for use in consumer electronics, automotive, and other industries. Other car manufactures working on the same technology include Hyundai Motor Company, Honda, Nissan, and BMW.

Batteries with solid electrolytes still have to overcome three main issues before the technology is ready to be commercialized.

All-solid-state batteries, when using lithium metal anode, often suffer from the formation and growth of lithium dendrites. These dendrites decrease coulombic efficiency by penetrating the separator between the cathode and the anode. They cause overheating and short circuits. 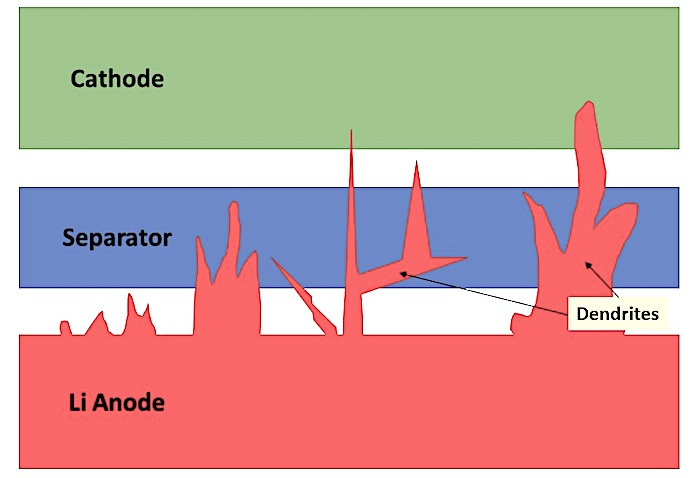 Dendrites typically form during charge-discharge. However, there is no reliable mechanism to describe how they start to grow at the interface of a solid electrolyte with a lithium metal electrode. Furthermore, the characteristics of solid electrolytes responsible for lithium dendrite growth are not yet well established.

2. Sensitivity to temperature and pressure

The two major types of solid electrolytes — polymer and ceramic or glass — have their own set of issues. Polymer electrolytes do not exhibit high conductivity at room temperature and require to be heated up.

Ceramic electrolytes, on the other hand, do exhibit proper conductivity at room temperature but need high pressure (approximately 1 ton over every square centimeter) to maintain contact with the electrodes.

At present, solid-state batteries are quite expensive to produce. Their manufacturing processes require costly vacuum deposition instruments, and thus they are difficult to scale as well. Higher prices have impeded the adoption of these batteries in smartphones, laptops, and other electronic devices.

Factors driving this growth include the rising trend toward the miniaturization of consumer electronics, the requirement of advanced batteries in electric vehicles, and increasing research&development activities by giant companies.

In terms of capacity, the below 20 mAh segment is projected to lead the solid-state battery market during the forecast period. These thin-film batteries will mostly be used in applications such as wireless sensors, packaging, cosmetic patches, and other low-drain equipment.

North America holds the majority of the share in this market, thanks to the increasing demand for smart cards and electric vehicles. The United States is the leading country to adopt these batteries in a wide range of applications. The European market is also projected to grow at a significant rate over the next decade. 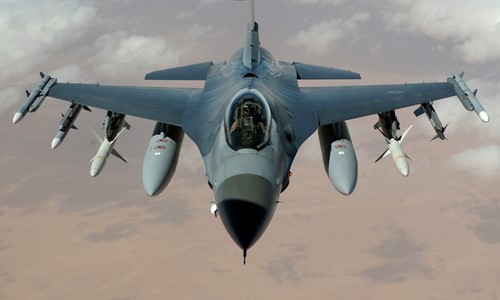 15 Best Fighter Jets in the World 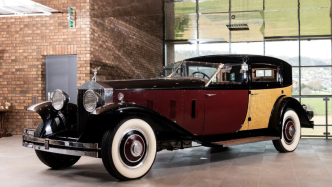 9 Most Expensive Rolls Royce Ever Made | 2023 Edition