Nuclear pasta is thought to exist within crusts of nuclear stars. Between the core of a neutron star and its surface, Coulomb repulsion and nuclear attraction forms matter (made up of neutrons and protons) with various complex structures. They are called nuclear pasta because their shapes resemble different types of pasta.

Breaking this matter would require more than 10 billion times the force needed to crack iron. This is a giant number, but since all materials on neutron stars are extremely dense, they are usually stronger than any material found elsewhere.

The explosion of a massive star (that has a solar mass between 10 and 29) forms a neutron star that is highly radioactive and rotates several hundred times per second. Typically, they have a diameter of 20 kilometers and a mass between 1.3 and 2.5 solar masses.

They exhibit bizarre phenomenon like deconfined quark matter, hyperon-dominated matter, superconductivity and superfluidity with temperatures near 10 billion Kelvin, and magnetic fields in excess of 10 trillion Gauss. To put this into context, the magnetic field on Earth’s Surface ranges from 0.25 and 0.65 Gauss.

Approximately 1 kilometer below neutron star’s surface, atom nuclei are closely compressed together, so close that they unite into a cluster of nuclear matter, an extremely dense mixture of protons and neutrons.

These clusters (although theoretical) resemble shapes of sheets, tubes or blob, and named after their pasta look-alikes, including lasagna, spaghetti, and gnocchi. If you go deeper in the core, you will find quark–gluon plasma.

Nuclear pasta is nearly 100 trillion times denser than water. Thus, it is tremendously difficult to analyze such materials in the lab. To explore the nature of these materials, scientists stretched nuclear spaghetti sheets in computer simulations.

After squeezing the atomic nuclei inside a neutron star, they found that chunks of matter formed into shapes of different types of pasta, including lasagna (simulation is shown in the right), spaghetti (middle), and gnocchi (left). In this study, nuclear pasta required the highest pressure (higher than any known material) to be deformed.

All these complex simulations were performed on a supercomputer. Let me give an overview of how much computational-resource they actually consume: it would take 2 million hours worth of single processor time or 250 years on a laptop with a decent GPU

Previous studies showed that the neutron star’s outer crust was likewise intensively stronger than steel. However, the inner crust wasn’t explored at that time.

It has now become clear that inner crust of the neutron star is even stronger. We don’t have any evidence of nuclear pasta and researchers are continuously looking for it. These outcomes could offer a glimpse of hope.

Since neutron stars rotate at very high speed, they emit gravitational waves (spacetime ripples), which could be detected by large observatories (like LIGO) on Earth. These waves will occur only if the crust of the neutron star is highly uneven, which means it has mountains or heaps of dense matter either within the crust or on the surface.

A strong crust would support bigger mountains, which will generate even large ripples. However, because of neutron star’s intense gravity, their mountains would not raise as high as Mount Everest, limiting their size in the order of centimeters (not km).

Results of these simulations indicate that nuclear pasta could support centimeter-tall mountains — large enough to generate ripples that could be spotted on Earth. If observatories captured such data, researchers could predict the size of mountains, and confirm that strongest materials lie in neutron stars’ crust. 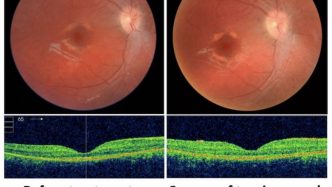 Researchers Discover 45 New Genes That Cause Blindness Or Cognitive Disorders