The First Image Of Supermassive Black Hole Destroying A Star

Instead of devouring a star in one go, black hole crushes and violently rips it apart, emitting a massive amount of light and radiation in the process. For the first time, an international team of researchers have directly imaged this process using infrared and radio telescopes.

They have formed a complete image of a tidal disruption event — a phenomenon that occurs when a star comes near a supermassive black hole’s event horizon — from over a decade of data.

Although very small number of tidal disruption events have been observed, theorists have hypothesized that there could be more usual occurrences like this. They proposed that materials coming out the doomed star create a rotating disk around the black hole and jet of materials is ejected [at the speed of light] from the poles of the disk. This phenomenon occurs in quasars and radio galaxies.

Until now, we have never been able to observe such jets from one of these tidal disruption events. But not long ago, scientists built a computer model that demonstrates what it looks like when a black hole eats a star. Now we have an actual picture.

Arp 299: A Pair Of Colliding Galaxies

The event took place about 150 million-light years from Earth, in a pair of colliding galaxies named Arp 299. One of the galaxies hosts a giant black hole that is nearly 20 million times bigger than our Sun. A star (about twice the size of our Sun) passing the black hole started a series of events that unveiled some crucial data of this process. 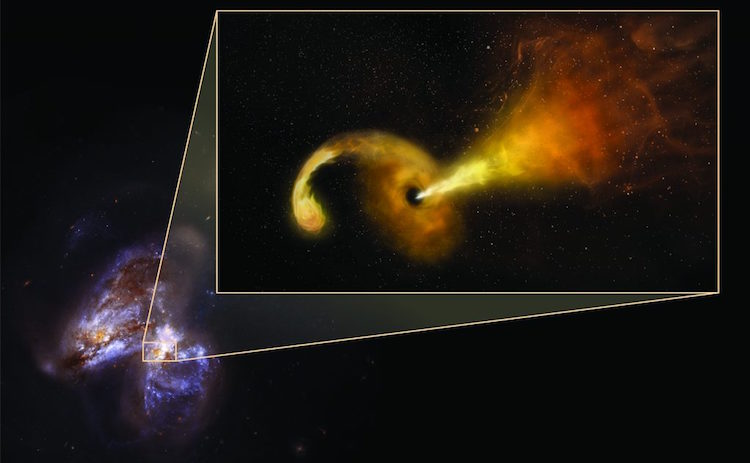 Data collected over the 10 years

Astronomers observed the first incident in January 2005, when they saw a shiny burst in infrared light using the William Herschel Telescope. The burst was coming from Arp 299. About six months later, they found a different source of radio emission using the Very Long Baseline Array (VLBA) system.

Over the next few years, the burst stayed bright at radio and infrared wavelength. However, it wasn’t clearly visible in X-rays and visible light due to dust around the center of the galaxy and interstellar gas.

To capture the infrared emission of one of the colliding galaxies, the astronomers used Spitzer Space Telescope (operated by NASA) and Nordic Optical Telescope located at La Palma in the Canary Islands.

Along with the VLBA and the European very-long-baseline interferometry network, they used several other radio telescope antennas separated by thousands of kilometers to observe the fine details of the distant material.

The observations carried out over the 10 years indicated that the source of radio emission was intensifying in a single direction. This is exactly what expected from a fast-moving jet of material, and in this case jet material moved at 1/4 of the speed of light (average speed).

This wasn’t a planned discovery. Scientists observed the burst in a part of a research that was aimed to identify supernova explosions in a pair of colliding galaxies. However, after carefully monitoring the data, 6 years later (in 2011) they confirmed that it wasn’t a supernova, but a jet.

Why This Research Is Useful?

There is a supermassive black hole in the center most galaxies in the universe. These black holes are billions of times bigger than our Sun. However, much of the time they stay in a quiet state, not devouring any celestial bodies.

Tidal disruption events offer a great opportunity to study the origin and evolution of jets, and uncover the mysteries of the distant universe. These events are not as rare as we once considered.

Using advanced radio and infrared telescopes, scientists may be able to find more such events and learn from them. This will enable us to know more about the environment where galaxies formed billions of years ago.