The history of roller coasters can be traced back to the 16th century when large ice-covered wooden slides were used as an amusement ride in Russia. The so-called Russian Mountains were between 21-24 meters in height and had a maximum 50-degree drop. Though it is not clear exactly when ice slides evolved into actual roller coasters, historians believe that the world’s first true roller coaster was built in Paris (1812) named Russes a Belleville.

The very first roller coaster in the United States was raised in the mid-1880s when Mauch Chunk Switchback Railway in Carbon County, Pennsylvania was converted to a tourist attraction.

The amusement-park industry as we know today is a result of a roller coaster boom in the 1970s and early 1980s. With time, they became taller, faster and mechanically complex. Below we’ll look at 12 tallest roller coasters in the world. 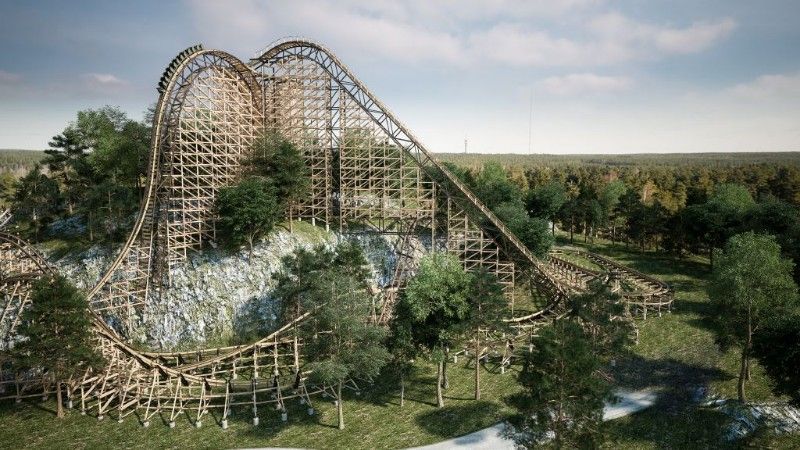 Located at Kolmarden Wildlife Park in Sweden, Wildfire is the second tallest as well as the fastest wooden roller coaster in the world. The entire ride consists of twelve hills and three inversions. Its maximum vertical angle is 83 degree.

In late 2016, the coaster was unexpectedly closed after its license was canceled by the state authorities citing environmental concerns. Many speculated that it would be the end of Wildfire, however, it was successfully revived a year later in mid-2017. 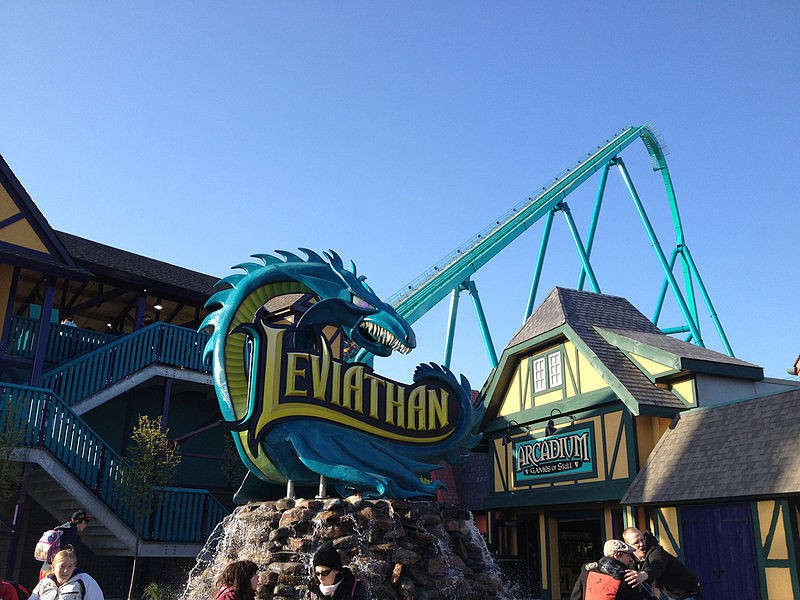 World’s tallest wooden roller coaster, T Express, is situated at Everland theme park in Yongin city, South Korea. T Express was built by Intamin, a Swiss manufacturing company, and maker of eight out of twelve tallest roller coasters in the world. It became operational in 2008. 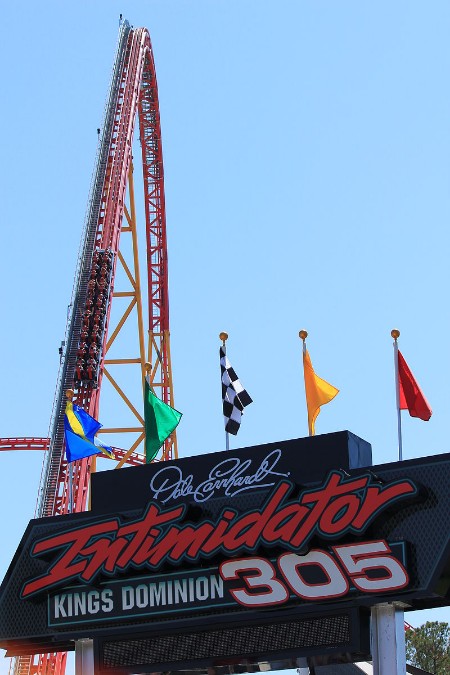 Intimidator 305 is located at Kings Dominion amusement park in Doswell, Virginia. It is the second Giga coaster (with height and drop above 91 m) built in the United States. The name is inspired from late NASCAR driver Dale Earnhardt, who was famously nicknamed “The Intimidator.”

After leaving the launch station, the train is cable lifted to at the top of 93 m hill. It then drops down at 140 km/h.

Intimidator 305 ran into trouble almost immediately after its launch. In its original design, the steep first drop caused some riders to experience temporary vision loss or blackouts under immense G forces. The ride was promptly closed and relaunched after remodeling.

Leviathan became Canada’s fastest and tallest roller coaster after surpassing Behemoth (also located at Canada’s Wonderland in Ontario) in 2012. It is inspired and themed after a mythical sea monster of the same name.

The ride starts a few meters behind the tallest (chain lift) hill. After reaching the height of 93.3 meters, the train makes a descent at about 148 km/h speed. Other elements of Leviathan include 56 meters high camelback followed by a 115-degree hammerhead turn. 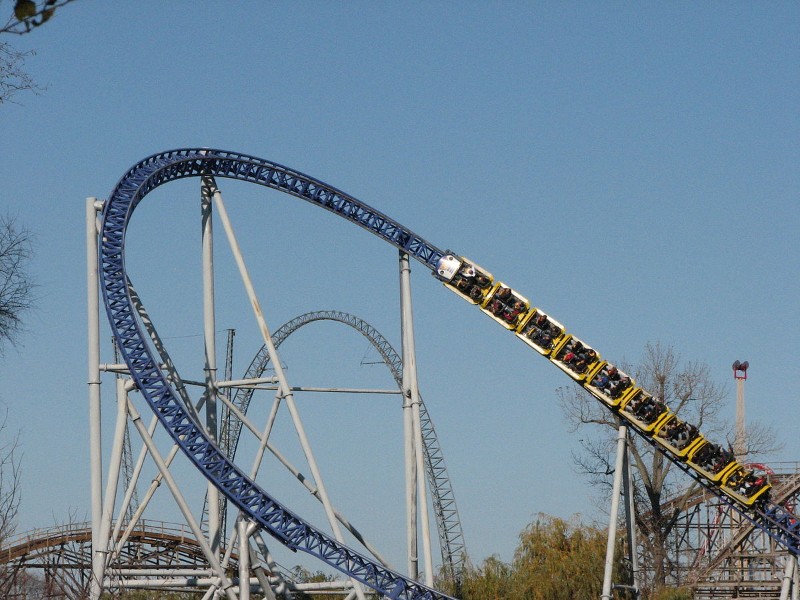 Millennium Force is one of the seventeen roller coasters at Ceder point amusement park in Ohio. It became the world’s first Giga coaster upon its opening in the year 2000.

Millennium held the title of world’s tallest coaster for about two months before a taller, Steel Dragon 2000 became operational in Japan. The total length of steel track is 2,010 m and the entire facility is spread over 13 acres of land. It is currently the third-longest ride in the U.S.

Millennium’s design, specifically its cable lift system was so efficient (the cost to weight ratio) that many successive roller coasters started using it. 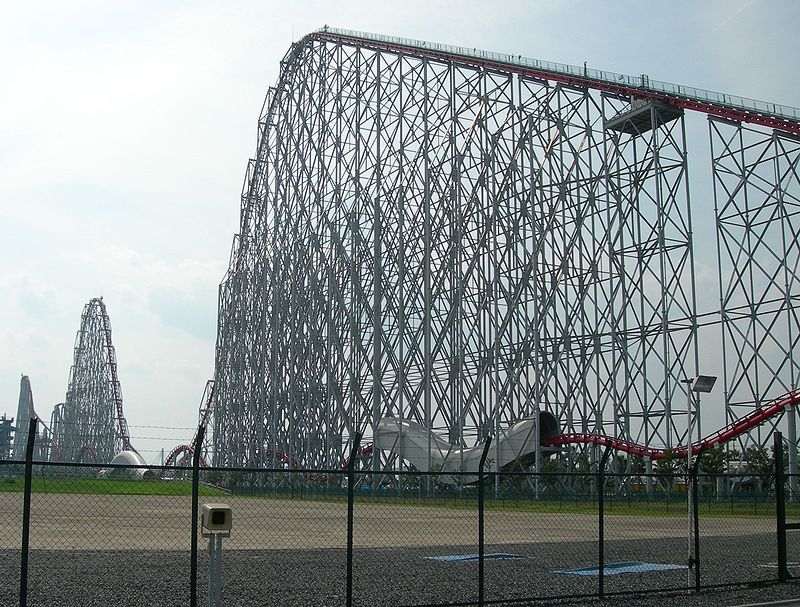 Steel Dragon 2000, located at Nagashima Spa Land in Mie Prefecture, Japan, is the tallest roller coaster in Asia and the longest in the world. It was initially built by D.H Morgan Manufacturing in 2000 but Bolliger & Mabillard, a Swiss manufacturing company, replaced all its working trains in 2013.

Steel Dragon 2000 is unique in a way that it required substantially more resources (steel) than any other coasters of its size. This is done to mitigate the risk of frequent earthquakes in this region.

The ride consists of 96.9 m chain lift hill followed by 93.5 m drop and subsequent smaller hills. Its total length is about 2,479 m. 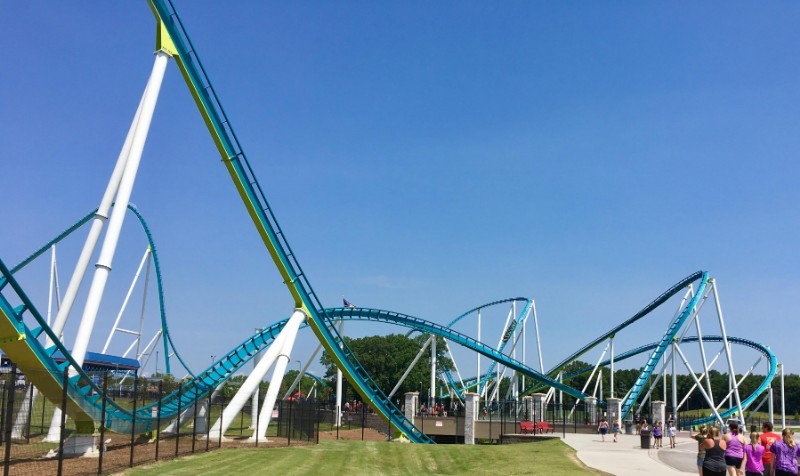 Charlotte’s Fury 325 (at Carowinds amusement park) is currently the tallest roller coaster built by a company other than Intamin. During Fury 325’s initial planning phase, its proposed height was 92 meters but was later extended to 99 meters. It took around $30 million to complete the entire project.

A hornet themed roller coaster, Fury 325 is inspired from Charlotte’s famous nickname; a hornet’s nest, which in fact derived from “a hornet’s nest of rebellion,” first used during the American War of Independence.

The steel track of Fury is about 2,012 meters long and 99 meters high. 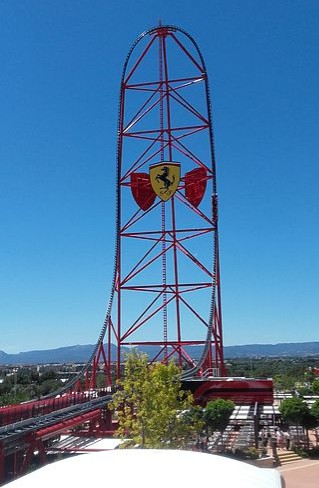 Red Force is located at PortAventura’s Ferrari Land theme park in Catalonia, Spain. It is both the tallest and fastest roller coaster in Europe. Red Force has 880 meters long horizontal track and 112 meters vertical track.

After leaving the station, the train takes about 5 seconds to reach 180 km/h. To propel trains at such speed, Red Force utilizes supercapacitors as energy storage system. It effectively reduces the peak load from the main power grid. 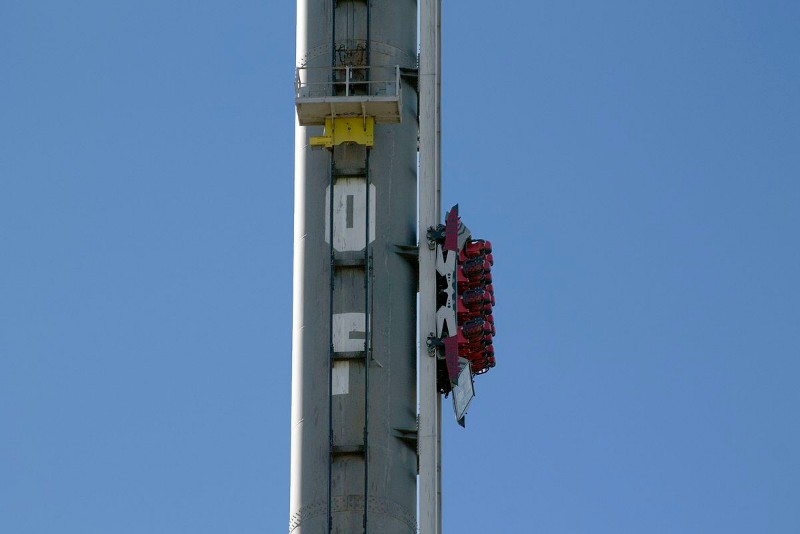 Located at Dreamworld theme park in Queensland, Australia, the Tower of Terror II was the world’s first roller coaster to reach 160 km/h speed. The original ride became operational in 1997 but was relaunched after modernization in 2010.

The ride begins in a 206 m long launch tunnel with the vehicle reaching 160.9 km/h in 7 seconds. It then climbs the vertical tower. For about 6.5 seconds (3.5 seconds going up and 3.5 seconds coming down), passengers experience near weightlessness. It ends with the vehicle or ‘escape pod’ entering the tunnel on the horizontal track. 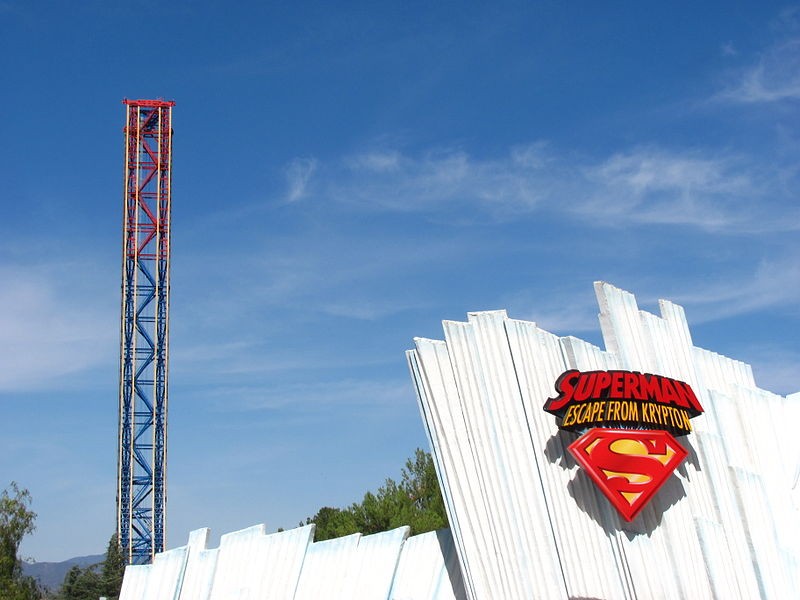 Superman: Escape from Krypton was initially launched in 1997 (as Superman: The Escape). During that time, it was tallest and fastest (tied with Tower of Terror II) roller coaster in the world. The coaster was later remodeled in 2011 with backward launching cars and a new color scheme.

The vehicles use linear synchronous motors to reach 0 to 160 km/h in about 7 seconds. After the launch track, trains make a vertical 90-degree climb on the 126 m tower with riders facing down or earthward.

The sensation of weightlessness, even for just a few seconds, as they dive down makes this Six Flags attraction a truly ecstatic experience. 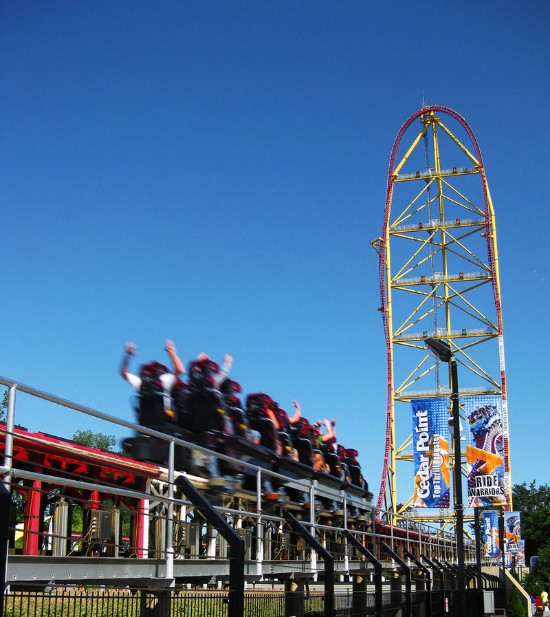 Located at Cedar Point amusement park in Ohio, Top Thrill Dragster is one of the only two strata coasters (with height and drop above 120 m) in the world. Upon its debut, Dragster not only became the world tallest (overall) but the fastest roller coaster as well.

The ride is inspired from Top Fuel drag racing sport. It once had decorative engines and spoilers but were traded for extra rider capacity.

Bad weather conditions such as rain/thunder and high-velocity winds often disrupt its services and may even lead to a temporary shutdown. 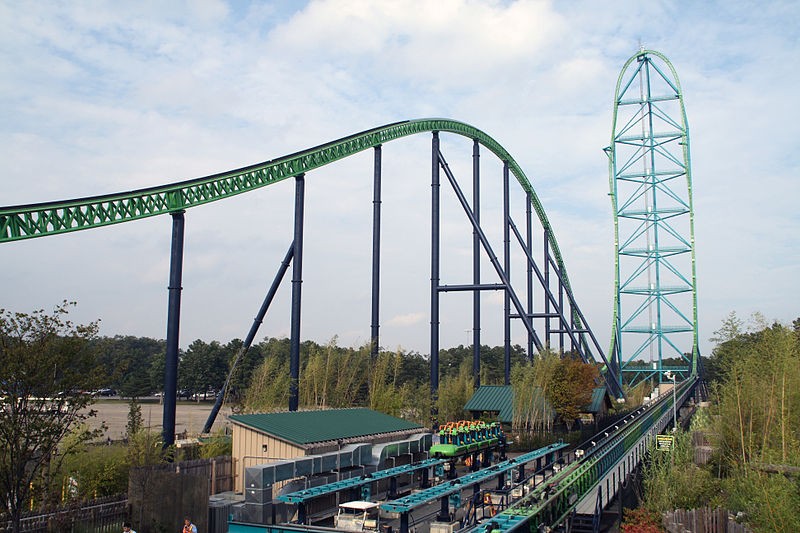 The ride starts with a powerful hydraulic launch that sends you from 0 to 206 km/h in 3.5 seconds. The train makes a 90-degree vertical spiral before reaching at top of the hill (139 m) and a 270-degree spiral as it descends. The total duration of a ride is 28 seconds. 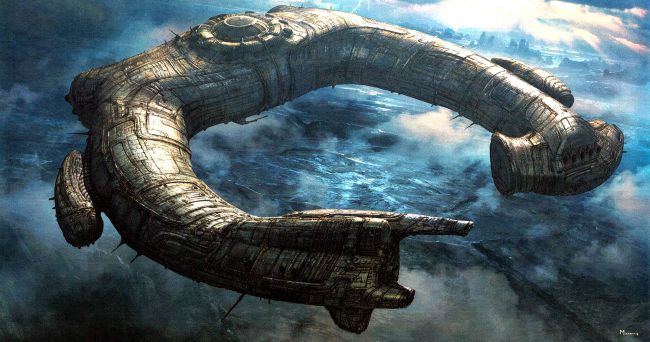 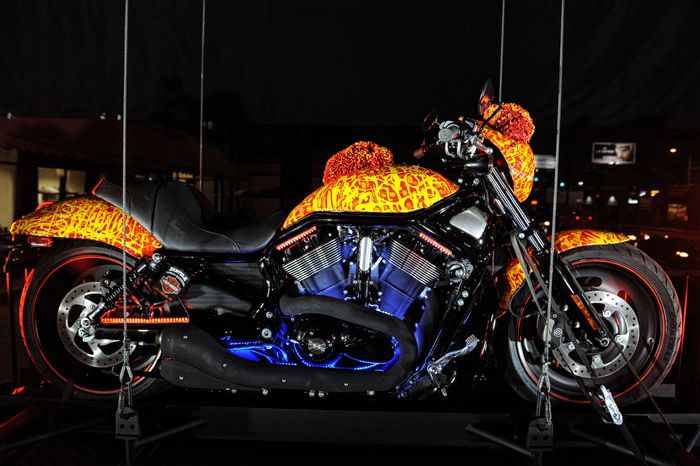