11 Thomas Edison Inventions That Everyone Should Know

There is absolutely no doubt that without Thomas Edison’s inventions our lives would be completely different if not difficult. Often described as America’s greatest investor, Edison was granted a total of 1,093 U.S patents in his lifetime, and he also received patents in other nations.

He was born in 1847, in a small Ohio village of Milan. Starting from a newspaper vendor, Thomas Edison became a telegraph operator where he discovered his entrepreneurial aptitude. Edison obtained his first ever patent in 1869, at a young age of 21. On average, he received a patent once every two weeks during his entire working career of over forty years.

While we all are well aware of Edison’s incandescent light bulb and his invaluable contribution in the field of electricity, there are few other inventions in various other fields that one must know about. 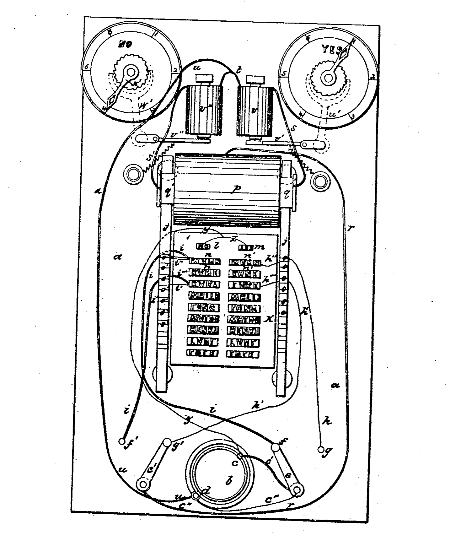 Thomas Edison received his first ever patent in 1869 for the electrographic vote recorder. His device could have allowed constituents to cast their vote by simply pushing yes or no button instead of manually writing their vote. It was, however, never used.

Basically, when a voter pushes a button (either yes or no), a transmission is sent to the central recorder that has pre-recorded list of all the constituents. A recording clerk then places a chemically processed paper to create the final voting list.

It is believed that Edison was encouraged by a newspaper report stating that both the New York State legislature and Washington, D.C., City Council are planning to introduce a device that would automate the voting process.

In the late 1870s, while working on the incandescent light bulb, Edison and his team generated large amounts of vacuum pumps which were used for sucking out the air from those bulbs. While it is unclear that who got the idea first, those vacuum pumps were also utilized for making air-tight containers for preserving fruit.

Basically, fruits or any other organic substances were filled into a glass container and before sealing it with a separate piece of glass, all the air inside that container were sucked out using the vacuum pumps. Edison patented this method of ‘fruit preservation’ in 1881.

Another food or cooking related invention for which Edison is often but falsely credited is wax paper. While coated beeswax had been in popular use since the middle ages, the proper wax paper was first introduced by Gustave Le Gray in 1851, when Edison was just a kid. 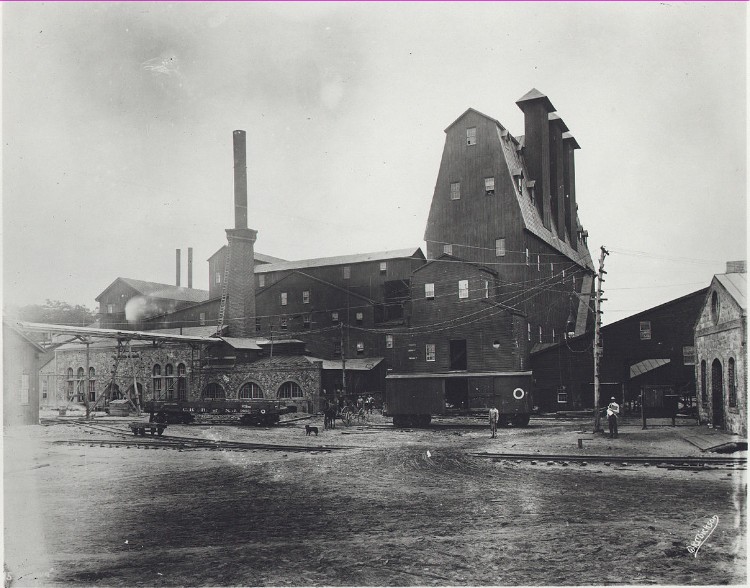 In 1881, Thomas Edison started an ore-milling company after noticing the shortage of usable, high-grade iron ore in the United States at that time. He also discovered that beach sand in the eastern coast of the States is composed of comparatively high amounts of iron. To take advantage, he developed and then patented a method in which the metal present in the sand could be sucked using a giant electromagnet.

Edison began iron extraction using this technique believing it was a better alternative to conventional ones. It was a highly ambitious project, but the extremely poor quality of iron in the Eastern parts (of U.S) and high costs made his venture a big financial failure. 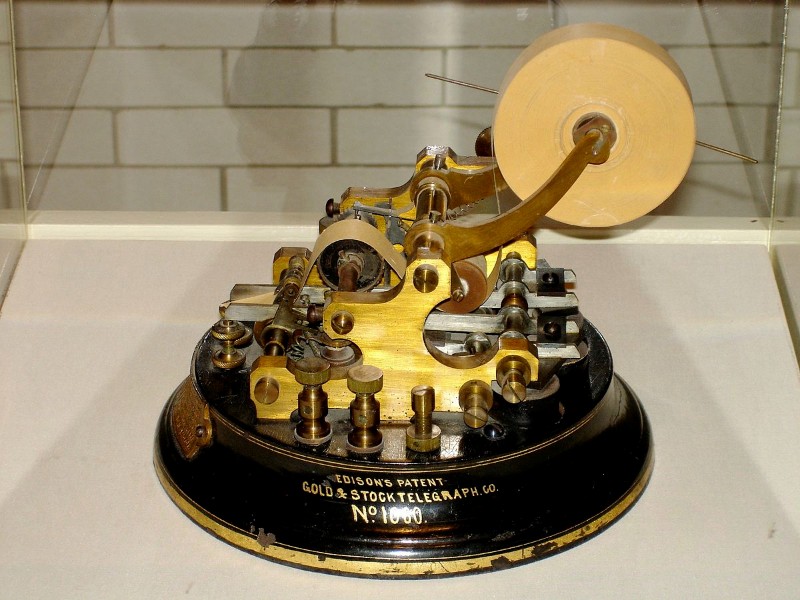 Working as a telegraph operator turned out to be an important factor in Edison’s career as an inventor. It inspired some of his early and most important inventions. Not only did he improved the working design of telegraph, but he also developed the first ever practical universal stock ticker machine based on its principle.

The early stock tickers mechanically conveyed stock quotes over long distances using the telegraph network. It was also used to send and receive coded messages. Edison’s stock ticker design was able to print about sixty characters in one minute.

On the other hand, Edison received a patent for two-way telegraph on August 9, 1892. 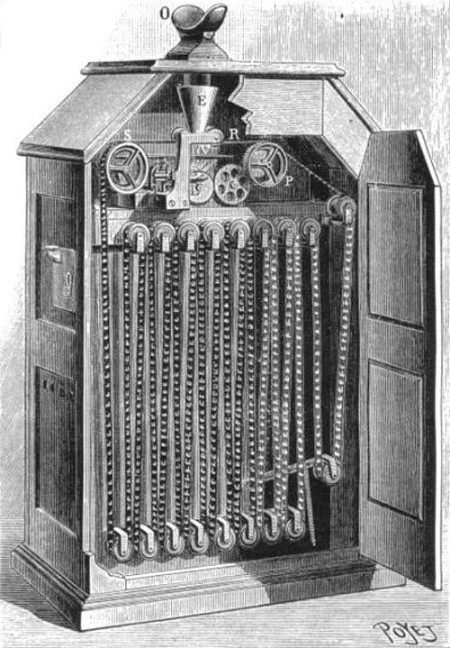 Interior of a Kinetoscope.

Between 1889 and 1892, under Thomas Edison’s employment, Scottish inventor William Kennedy Dickson and his team developed the Kinetograph, a peepshow machine through which users can watch films developed by Edison’s own company.

Around the same time, a similar device was designed by French inventor Louis Le Prince, who also filed for its patent in the United States and France. However, Edison’s design took precedence and was eventually granted the patent (in the U.S).

Based on his preliminary claim (caveat) with the U.S Patent Office, it is clear that Edison wanted to develop the Kinetograph as part of a complete audiovisual package and ship it along with the phonograph. Kinetograph remained the standard for all cinematic projection until the arrival of video technology.

Dickson and his team also developed a picture camera, called the Kinetoscope, with intermittent (stop-and-go) mechanism, which was used to take photographs of films and other experiments. On May 20, 1891, a prototype of the Kinetoscope was exhibited at a convention of National Federation of Women’s Clubs. 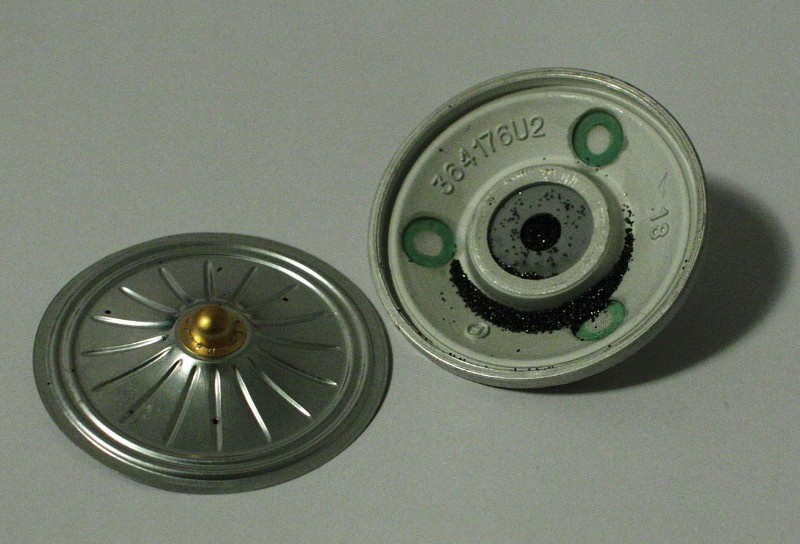 Inside of an Ericsson carbon microphone with visible carbon granules

In 1876, Edison started working on carbon microphone (then known as the transmitter) as an improvement over the existing telephone transmitters at that time. His microphone design consists of carbon granules in between two metal plates. The pressure of sound waves would cause the carbon to alter resistance.

A steady passage of direct current through the plates and changes in electrical resistance caused by sound waves result in a modulation of the current. Perhaps one of the main advantages of carbon microphones is that it can work efficiently even in very low voltages without the need for an auxiliary power supply. 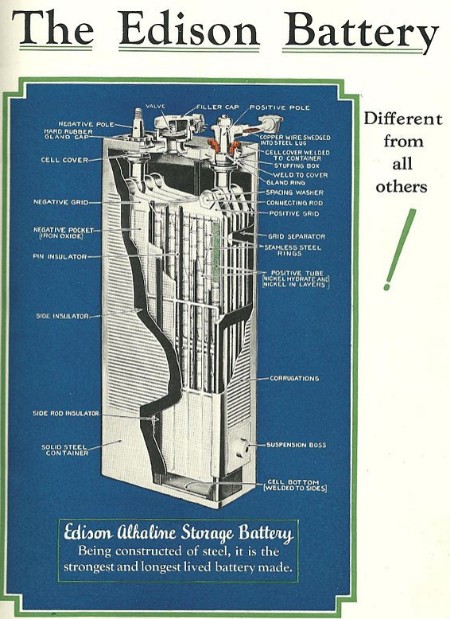 Inside of the Nickel-Iron cell. Image is taken from the original Edison Battery manual

Edison believed that an Alkaline based battery would work more efficiently in electric cars than the traditional lead-acid one. So, in 1901, he patented a nickel-iron battery design both in the United States and in Germany. The battery used potassium hydroxide as electrolyte.

The market share of electric vehicles, at that time, was low, but, Edison expected it would increase in the near future and so the demand for his battery. However, electric cars went almost completely out of production a few years after its market introduction. Few electric car companies such as Baker Electric and Detroit Electric used Edison’s battery to power some of their units.

As compared to the lead-acid batteries in use around that time, Edison’s alkaline storage battery had higher energy density and took only half the time to reach ‘full charge’. However, they were more expensive and weren’t suitable for use in colder temperatures.

After a number of first-hand experiences, Edison was able to recognize the potential demand for a faster and more efficient copying device that could safely duplicate handwritten documents and designs. As a result, he developed and later patented electric pen as part of a complete copying system which includes an ink roller attached to a cast-iron flatbed and an iron cast holder with a wooden insert (collectively called Mimeograph). 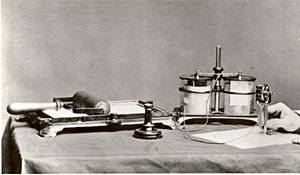 The user must first use the pen to write or draw words/designs by making a series of small perforations on a stencil. The electric pen was powered by a wet cell battery and attached to an electric motor. Once prepared, the stencil is placed above a blank sheet of paper in the cast-iron flatbed duplicating press. An inked roller is then pushed over the stencil, thus leaving an impression of the document or image on the paper.

According to Edison, his electric pen could make about 3,000 small punctures per minute and that one unit could make 5,000 copies. Edison’s electric pen was inspired by the printing telegraph. 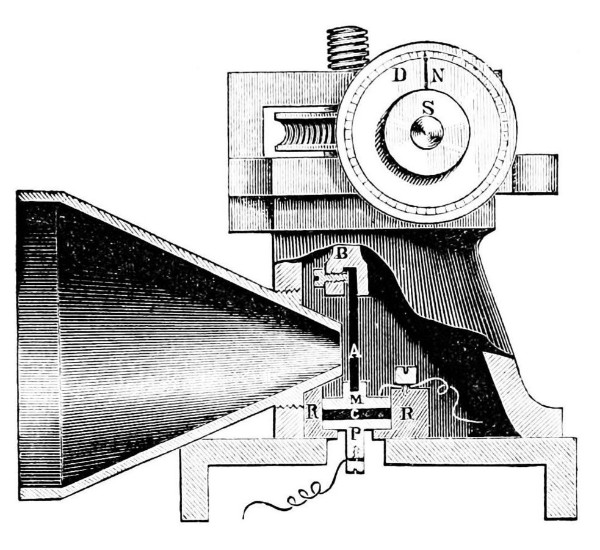 Cross section of the tasimeter

In the mid-1800s, there was no specialized device that could accurately measure infrared radiation. That, however, changed in 1878, when a team of astronomers used Edison’s tasimeter to measure temperature changes in the heat emitted from the Sun’s corona during the total Solar eclipse of July 29 of that year.

The tasimeter featured a rod, one of its most essential components, made of vulcanite that could expand or contract according to the changes in the temperature. Any variation in the length of the rod alters the resistance of an electrical circuit attached to the device and causes its galvanometer-needle to deflect. This deflection is then studied to measure the changes in temperature.

Unlike most of his other inventions, Edison didn’t patent the tasimeter and allowed companies to manufacture it without demanding any royalty.

Fluoroscopy is an integral part of medical imaging technology. A fluoroscope allows doctors to examine critical functions of the patient’s internal organs such as the motion of swallowing and heart functions. Like CT Scan (computed tomography) and radiography, fluoroscopy uses X-rays to generate radiographic images.

Thomas Edison is responsible for developing the first ever commercially available fluoroscope. Prior to his discovery, all fluoroscopic screening was performed using barium platinocyanide, a substance that had played a key role in the discovery of X-rays.

During his research, Edison discovered that calcium tungstate, also known as Scheelite, produces much brighter fluoroscopic images than barium platinocyanide and can be used more efficiently. While various improvements have been made in the past few decades, the most basic form of Edison’s fluoroscope is still in use. 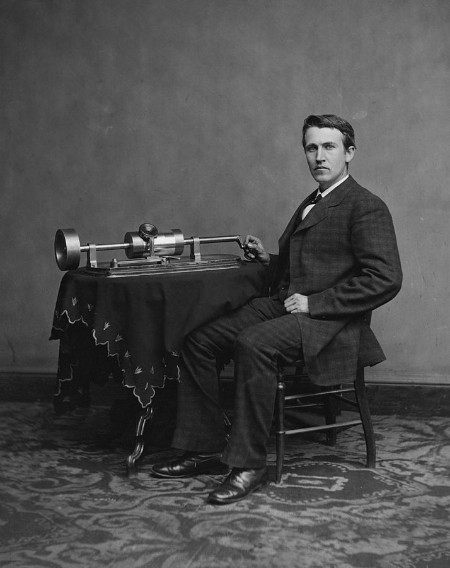 Thomas Edison alongside his phonograph in 1878

As an inventor, the first big breakthrough in Edison’s career came in 1877, when he invented the phonograph. While others had previously designed machines that could record sound, Edison’s phonograph was the first ever to be able to reproduce them.

Edison’s original phonograph design included a tinfoil sheet, onto which the sound is recorded, wrapped around a rotating cylinder. The arrival of the phonograph was so unexpected that it took little time to gain widespread popularity. It made Edison an overnight celebrity and was also named “The Wizard of Menlo Park”.

On the other hand, the phonograph had a poor sound quality and the recordings could be played only once. Edison received a patent for his device in 1878.

After Edison, engineers and inventors such as Alexander Graham Bell and Charles Tainter made several crucial improvements to the initial phonograph design. 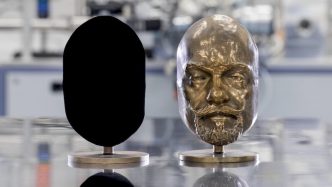 Vantablack: 11 Facts About One Of The World’s Darkest Materials 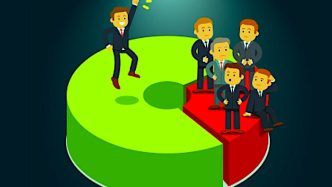