7 Different Types of Rockets | Based On Propulsion And Their Usage

Rocket propulsion is a fascinating technology. A technology that generates enough thrust to move an aircraft through the air. But do you know the rocket technology was invented by the Chinese in the 13th century?

Of course, rockets were then not used for launching spacecraft, but for the military purpose instead. The world saw its first rocket launcher in 1380, which was actually a fire arrow launcher named ‘wasp nest’ created by the Ming dynasty.

Rockets were not used in industrial or scientific works until the mid 20th century. In fact, the first rocket that could fly high enough to get out of the Earth’s atmosphere was first launched in 1942 by   Germany. In 1957, the Soviet Union launched the first rocket that put the first artificial satellite (Sputnik 1) into an elliptical low Earth orbit.

Since then, space agencies and research centers have developed numerous rocket and missile technologies to obtain efficient thrust. We are listing the most popular ones that have caught people’s attention in the last seven decades.

So how many types of rockets actually are there? Basically, rockets can be classified into two broad categories- 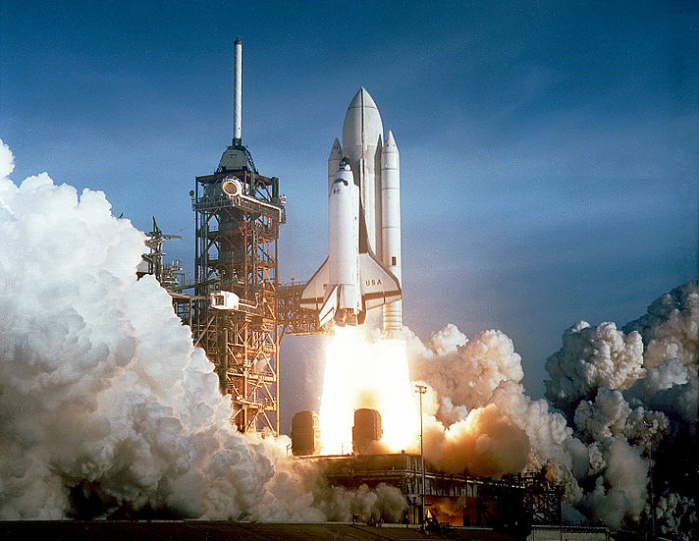 The Columbia Space Shuttle was launched with the help of two solid-fuel boosters  Image Courtesy: NASA

All older firework rockets were powered by solid engines that use solid propellant. However, there are now new designs, more advanced fuels, and functions with solid propellants. Today, advanced state, solid propellant engines are mostly used in the Delta series booster stages and the Space Shuttle dual booster engines.

Since these rockets can be reliably launched on short notice, and solid fuel can be stored for long periods, they are often used in military applications. Small missiles like Nike Hercules and Honest John, and large ballistic missiles like Vanguard and Polaris, use solid-fuel engines.

Although these rockets can provide high thrust for relatively low cost, they are not as efficient as modern, liquid-fuel rockets. They can only be used for launching up to 2 tons of payload into low Earth orbit.

An inert gas is stored in an engine tank at an extremely high pressure to force the propellants into the combustion chamber. Although engines have a lower mass ratio, they are more reliable and thus mostly used in satellites for orbit maintenance.

The most popular ones are bipropellant rockets that run on liquid fuel (hydrocarbon or liquid hydrogen) and a liquid oxidizer (liquid oxygen). The rocket could also use a cryogenic engine, where both oxidizer and fuel are gases that have been converted into liquids at low temperatures.

The first recorded flight of such a rocket took place in 1926 when professor Robert H. Goddard experimented with a vehicle using liquid oxygen and gasoline as propellants.

Do you know Sputnik was propelled into space by a liquid-fueled rocket, followed by the American Apollo 11 mission? 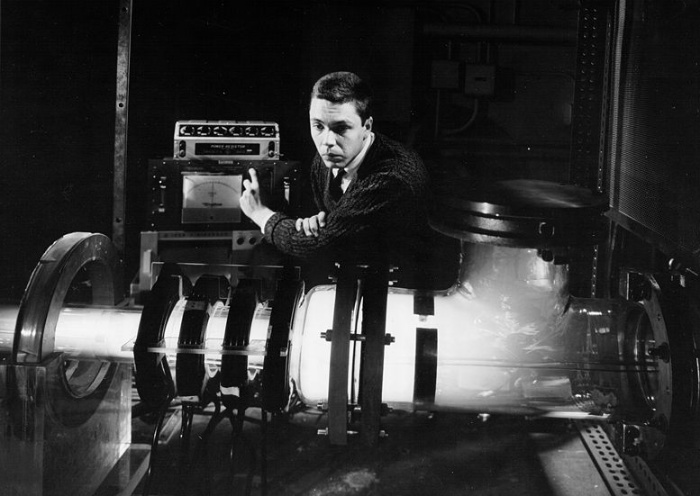 In a plasma propulsion engine, the thrust is generated from quasi-neutral plasma (where ion and electrons are packed in equal numbers). It’s a type of electric engine that uses currents and potentials (produced internally in the plasma) to accelerate the charged particles in the plasma.

Over the last couple of decades, many institutions have worked or currently working on plasma-fueled engines, including the Iranian Space Agency, Australian National University, and the European Space Agency.

Plasma rockets can be easily built and used more than once due to their simple theory of performance and cheap fuel (a large number of gases, and their combinations can be used as fuel). Unlike conventional chemical rockets, plasma rockets do not use all of their fuel all at once, which makes them easily usable in flight.

However, the biggest issue with plasma rockets is producing enough electricity to convert gases into plasma. And because of their relatively lower thrust, they aren’t suitable for launching heavy satellites. On average, a plasma rocket can produce approximately 1/2 kilograms of thrust. Moreover, with plasma thrusters, there is always a possibility of rocket destroying itself.

VASIMR (Variable Specific Impulse Magnetoplasma Rocket) is the newest types of plasma fueled rocket propulsion engines that ionize the propellant into a plasma with the help of radio waves. One of the many advantages of a plasma propulsion engine is its higher specific impulse value or Isp than any other type of rockets.

While plasma engines are still not entirely utilized commercially, a few small-scale versions have already been successfully deployed and tested. In 2011, NASA, along with a Massachusetts-based propulsion company, launched the first-ever Hall thruster (plasma) into space onboard Tacsat-2 experimental satellite. 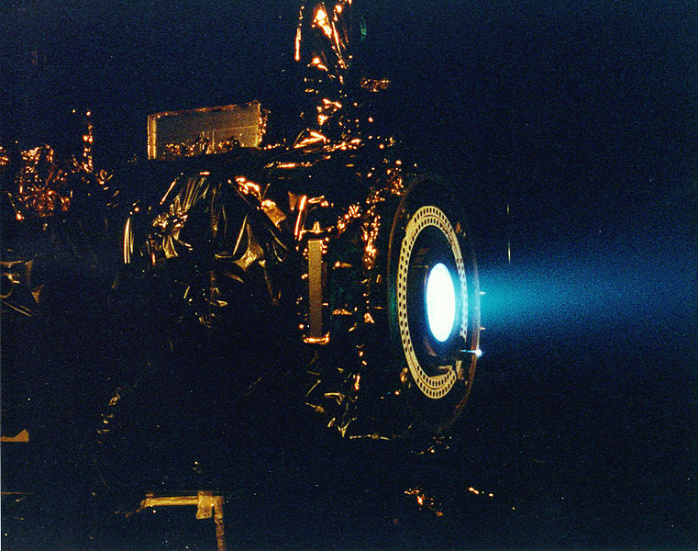 Iron thrusters are another form of electric propulsion that uses electric current to accelerate positive ions. More specifically, they use electrostatic or electromagnetic force to accelerate ions and produce thrust.

Ion thrusters ionize propellant by adding/removing electrons to generate ions. Xenon is mostly used as a propellant due to its ionizing capabilities and high atomic mass, which produces enough amount of thrust when ions are accelerated.

Since xenon is an inert gas with impressive storage density, it can be efficiently stored on spacecraft. Most ion thrusters use a process known as thermionic emission to produce electrons.

Ion engines cannot operate in the Earth’s atmosphere, where ions are present outside the engine. They cannot overcome any notable air resistance, and work only in the vacuum of space. At present, ion thrusters (designed by NASA) are used to keep more than 100 geosynchronous communication satellites in their proper positions.

The first-ever successful deep space mission to use ion thrusters was NASA’s Deep Space 1 (in 1990). Later, JAXA launched the Hayabusa spacecraft in 2003, which is still in operation.

As of now, NASA is working on two different ion thrusters — the Annular Engine and the NASA Evolutionary Xenon Thruster — to increase the operational life of spacecraft and reduce operating costs. 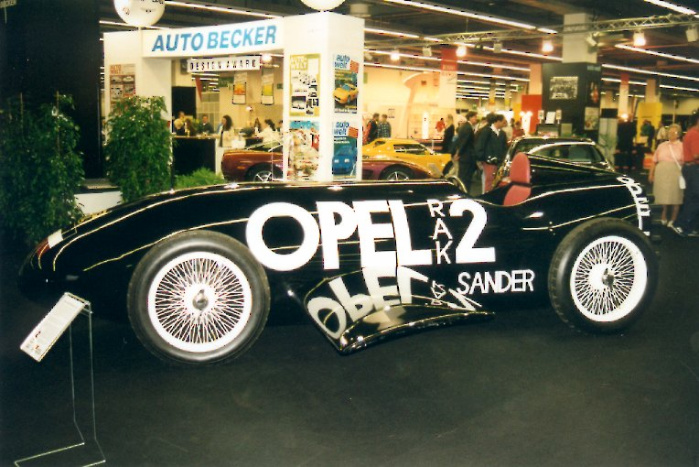 You may have heard about jet cars, but what about rocket cars? In contrast to a jet-powered car, a rocket car carries both fuel and oxidizer, which eliminates the need for a compressor and an air inlet, which in turn reduces the total weight and minimize drag.

These cars can run their engines for short durations (<20 seconds), and because of their magnificent thrust-to-weight ratio, they can reach high speed quickly.

Rocket cars were once popular among drag racing communities in the United States, but after a huge increase in hydrogen peroxide price, it lost its edge and was eventually banned in the country for safety reasons. However, they are still operating in some parts of Europe.

In 2018, Tesla Motors unveiled its plans to manufacture rocket-power-assisted road cars. It will be available as an optional package in Roadster models. The company would integrate propulsive equipment (cold gas thrusters) that use pressurized/compressed air to enhance performance.

The concept of rocket pack is almost a century old but didn’t become popular until the 1960s. It’s a low-power propulsion device that carries individuals from one place to another over small distances.

A rocket pack generally uses hydrogen peroxide as fuel to propel a person through the air. However, the rocket pack technology has hardly advanced at all since the 1950s. The overall mass ratio seems to be the main culprit that limits the flight time to seconds.

Although lightweight engines running on oxygen and steam can provide a decent amount of thrust, the rocket yields relatively low exhaust velocity, and thus a weak specific impulse. The existing jet packs can only fly for approximately 30 seconds, with a maximum speed of about 120 km/h.

Jetpacks can also be built with turbojet engines powered by kerosene-based jet fuel. They can achieve greater height and longer flight lasting several minutes but are difficult to construct and too expensive. So far, only one working prototype has been made, which underwent flight tests in the 1960s. 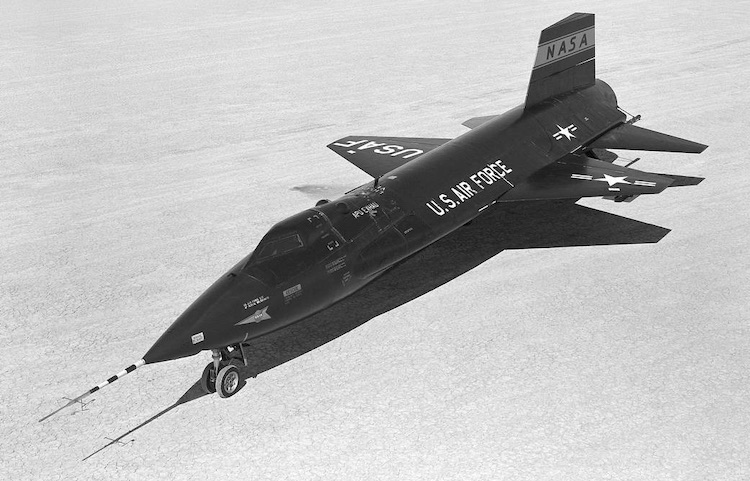 Rocket engines can also be used in aircraft. Rocket planes can attain much higher speeds than a similar-sized aircraft, but only over small distances. And since they don’t need atmospheric oxygen,   they are perfect for high-altitude flights.

Rocket planes were first engineered by the Germans during World War I. However, these initial designs had some serious performance issues, which was later fixed by British engineers in the 1950s when they came up with their much efficient turbojet designs. They could deliver shorter takeoffs and much higher acceleration.

Read: The First-Ever Silent, Lightweight Aircraft With No Moving Parts

Due to the heavy use of propellants, rocket engines are mostly used in interceptor aircraft and spaceplane. The X-15 is one of the most popular examples of rocket-powered aircraft. It was a missile-shaped plane with peculiar wedge-shaped vertical tail and short wings, built by North American Aviation. During its operational phase, it set altitude and speed records of 354,200 ft and 4,520 mph.

15 Cool and Best Limousines in the world