Substances that have Vickers hardness greater than 40 GPa are called superhard material. Most superhard and hard materials are made of carbon allotropes: the hardest one is diamond, followed by boron nitrides, carbon nitrides, carbides of transition metals like rhenium, tungsten, chromium etc.

A material called pobedit — made of tungsten carbide (90%) and cobalt (10%) — has remained unrivaled for almost a century. It was developed to build anti-tank shell caps during the World War II, and since then it has been intensively used in mining and machining tools, such as in drilling instrument.

Superhard materials have a wide range of application, from metalworking and machine building to defense industry and surgical uses. These materials either have low fracture toughness or require high-pressure synthesis.

Recently, a team of scientists at Skoltech and Moscow Institute of Physics and Technology predicted a new superhard material made of tungsten boride that outperforms pobedit. The new compound is called WB5.

Researchers used USPEX (Universal Structure Predictor: Evolutionary Xtallography) algorithm to predict a new substance that can be formed at room pressure. For each stable composition, they performed structure relaxations and total energy calculations using density functional theory. Luckily, they came up with an unknown compound which is easy to synthesize under normal conditions.

Since tungsten-boron compounds have been the subject of numerous theoretical studies and experiments, the team was quite surprised that this material hasn’t been discovered until now.

WB5 has the capability to compete with pobedit in 2 major parameters: Fracture toughness and Hardness, which are 20% lower and 50% higher than pobedit. It has a 45 GPa of Vickers hardness and can possess nearly 4 MPa * m0.5 of fracture toughness. 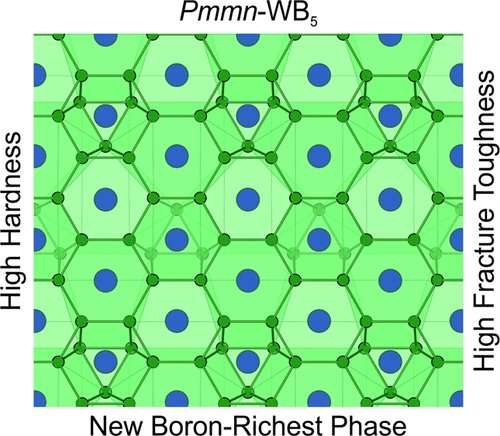 Researchers used anharmonic and quasiharmonic approximation to analyze its temperature dependence of mechanical properties. The material is thermodynamically stable at zero pressure and zero Kelvin temperature, and is stabilized by zero-point energy. The elasticity of the material depends on temperature non-linearly.

All these data strongly suggest that WBS could be promising superhard material for a wide range of industrial applications.