The concept of 3D Printing was laid out by David E.H. Jones in 1974. However, methods and materials for fabricating models weren’t developed until the early 1980s.

The term ‘3D printing’ covers numerous processes and techniques that offer a wide spectrum of capabilities for the production of parts and products in different materials. In recent years, these processes have developed significantly and can now perform crucial roles in many applications.

This overview article aims to explain the different types and processes of 3D Printing, how do they work, and what are their uses and benefits in the current market. Let’s start with a very basic question.

What Is 3D Printing?

3D Printing, also known as additive manufacturing, is a process of making a physical object from a three-dimensional digital model or a CAD model. It involves various computer-controlled techniques in which material is joined or solidified to build an actual object.

Typically, the material (such as powder grains or liquid molecules being fused together) is added layer by layer at the millimeter scale. This is why 3D Printing is also called an additive manufacturing process.

In the 1990s, 3D printing techniques were referred to as rapid prototyping. They were suitable only for the fabrication of aesthetic or functional prototypes. Since then, we have come a long way.

Today’s 3D printing technology is advanced enough to create complex structures and geometries that would be otherwise impossible to build manually.

The precision, material range, and repeatability of 3D Printing has increased to the point that we can construct almost anything — from simple prototypes to complex final products such as eco-friendly building, aircraft parts, medical instruments, and even artificial organs using layers of human cells.

How Does It Work Exactly?

All 3D printing techniques are based on the same principle: a 3D printer takes a digital model (as input) and turns it into a physical three-dimensional object by adding material layer by layer.

It is way different than traditional manufacturing processes such as injection molding and CNC machining that uses various cutting tools to construct the desired structure from a solid block. 3D Printing, however, requires no cutting tools: objects are manufactured directly onto the built platform.

The process starts with a digital 3D model (a blueprint of the object). The software (specific to the printer) slices the 3D model into thin, two-dimensional layers. It then converts them into a set of instructions in machine language for the printer to execute.

Depending on the type of printer and size of the object, a print takes several hours to complete. The printed object often requires post-processing (like sanding, lacquer, paint, or other types of conventional finishing touches) to achieve the optimal surface finish, which takes additional time and manual effort.

Different types of 3D printers employ different technologies that process different materials in different ways. Perhaps the most basic limitation of 3D Printing, in terms of materials and applications, is that there is no one-size-fits-all solution.1

As per the ISO/ASTM 52900 standard, all 3D printing processes can be categorized into seven groups. Each has pros and cons associated with it, which usually involve aspects such as cost, speed, material properties, and geometrical limitations. 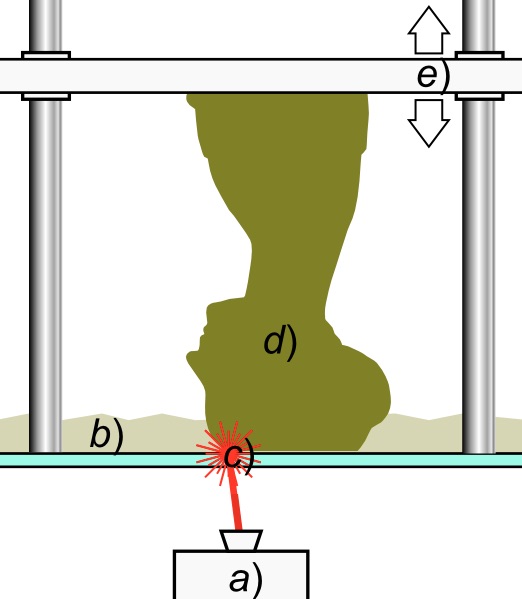 A 3D printer based on Vat photopolymerization has a container filled with photopolymer resin, which is hardened with an ultraviolet light source to create an object. The three most common forms of Vat Polymerization are

1a) Stereolithography (SLA): Invented in 1984, SLA uses an ultraviolet laser to crosslink chemical monomers and oligomers to form polymers that make up the body of a three-dimensional solid. While the process is fast and can construct almost any structure, it can be expensive.

1b) Digital Light Processing (DLP): It utilizes conventional light sources such as arc lamps (instead of lasers). Each layer of the object is projected onto the vat of liquid resin, which is then solidified layer by layer as the lifting platform moves up or down.

1c) Continuous Liquid Interface Production (CLIP): It is similar to stereolithography but continuous and up to 100 times faster. CLIP can produce rubbery and flexible objects with smooth sides, that couldn’t be created with other techniques. 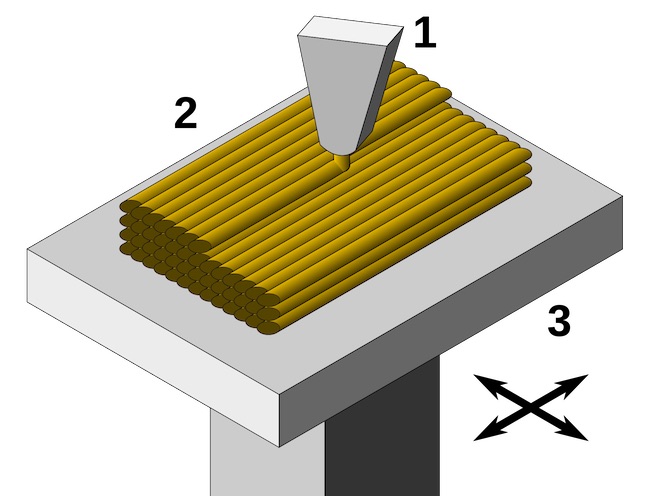 Illustration of material extrusion: Nozzle(1) is depositing material(2) on a build platform(3).

In this process, a filament of solid thermoplastic material is pushed through a heated nozzle, which melts the material and deposits it on a build platform along a predetermined path. This material eventually cools and solidifies, forming a three-dimensional object. The most commonly used techniques in this process are

2a) Fused Deposition Modeling (FDM): It uses a continuous filament of a thermoplastic material, such as nylon, thermoplastic polyurethane, or polylactic acid.

2b) Robocasting: It involves extrusion of a paste-like material from a small nozzle while the nozzle is moved across a build platform. The process is different from FDM as it doesn’t rely on drying or solidification of material to retain its shape after extrusion. 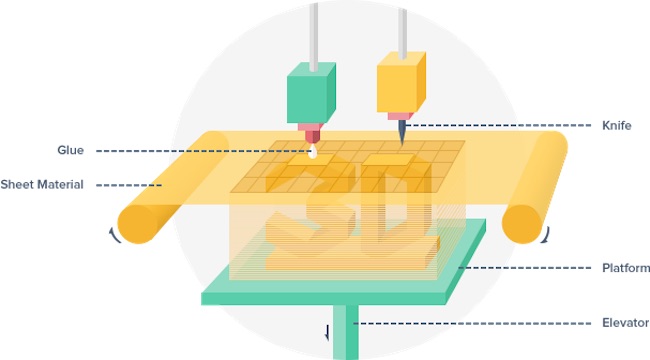 Some printers use paper and plastic as the build material to lower the cost of Printing. In this technique, multiple layers of adhesive plastic, paper, or metal laminates are successively joined together and cut to shape using a laser cutter or knife.

The layer resolution can be defined by the material feedstock. Typically it ranges between one and a few sheets of copy paper. The process can be used to make large parts, but the dimensional accuracy of the final product will be quite lower than that of stereolithography. 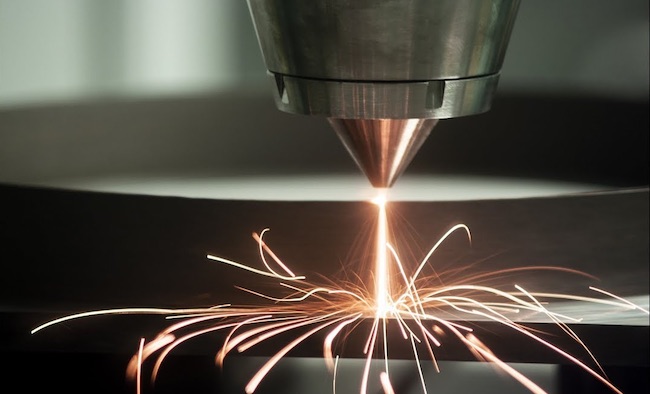 Directed energy deposition technique is commonly used in the high-tech metal industry and rapid manufacturing applications. The printing apparatus contains a nozzle that is fixed to a multi-axis robotic arm. The nozzle deposits a metal power on the build platform, which is then melted by a laser, plasma or electron beam, to form a solid object.

This type of 3D Printing supports various metals, functionally graded materials, and composites, including aluminum, stainless steel, and titanium. Not only can it construct completely new metal parts but can also attach material(s) to existing parts, enabling hybrid manufacturing applications. 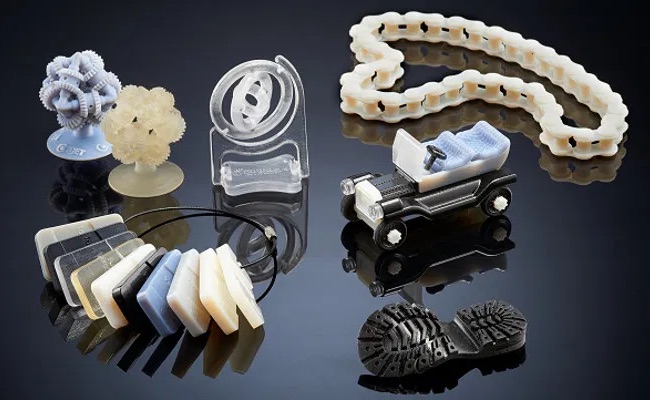 Material jetting operates in a similar fashion to inkjet paper printers. In this process, a photosensitive material is applied in droplets through a small diameter nozzle and then hardened by ultraviolet light, building a part layer-by-layer.

The materials used in this technique are thermoset photopolymers (acrylics). Multi-material printing and a broad range of materials (including rubber-like and transparent materials) are also available.

Since material jetting 3D Printing can construct parts of high dimensional accuracy with a smooth surface finish, it’s an attractive option for manufacturing both visual prototypes and commercial tools. 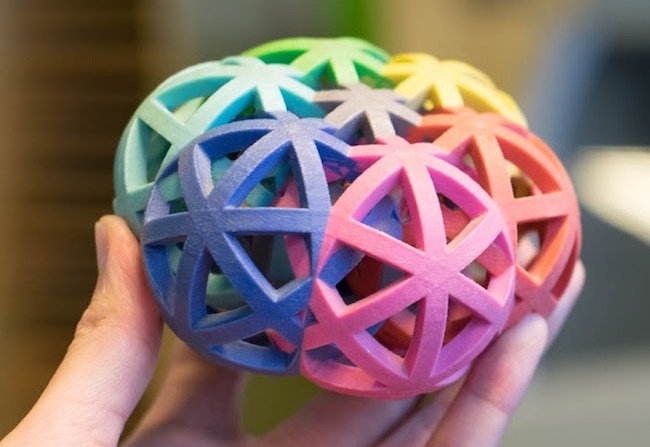 Binder jetting uses two materials: powder base material and a liquid binder. The powder is distributed in even layers in the build chamber, and binder is applied through jet nozzles, which ‘glue’ the powder particles to build the desired object.

Wax or thermoset polymer is often mixed with bonded powder to increase its strength. After the 3D print is completed, the leftover powder is collected and used for printing another structure.

Since the technique is very similar to an inkjet-like process, it is also called the inject 3D Printing. It is mostly used for printing elastomer parts, overhangs, and colorful prototypes. 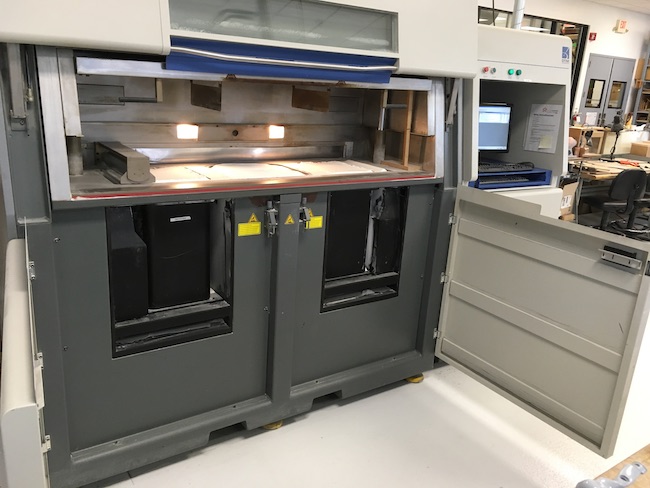 Powder bed fusion is a subset of additive manufacturing whereby a heat source (such as thermal print head or laser) is used to consolidate material in powder form to build physical objects. The five most common forms of this technology are

7a) Selective Laser Sintering (SLS): It uses a laser as the power source to sinter powdered material like polyamide or nylon. Here the term sinter refers to the process of compacting and forming a solid mass of material by applying pressure or heat without melting it to the point of liquefaction.

7b) Selective Laser Melting (SLM): Unlike SLS, this technique is designed to completely melt and fuse metallic powders together. It can create fully dense materials (layer by layer) that have mechanical characteristics similar to those of traditional manufactured metals. This is one of the fast-developing processes that is being implemented in both industry and research.

7c) Electron Beam Melting (EBM): In the process, the raw material (wire or metal powder) is placed inside a vacuum and fused together using an electron beam. Although EBM can only be used with conductive materials, it has superior build speed because of its higher energy density.

7d) Selective Heat Sintering (SHS): It uses a thermal printhead to apply heat to layers of powdered thermoplastic. As soon as the layer is finished, the powder bed moves down, and a new layer of material is added, which is then sintered to form the next cross-section of the model. This technique is best for manufacturing inexpensive prototypes and parts for functional testing.

7e) Direct Metal Laser Sintering (DMLS): It is similar to SLS but uses metal power instead. The leftover power becomes a support structure for the object and can be reused for the next 3D print. DMLS parts are mostly made with powdered materials like titanium, stainless steel, aluminum, and several niche alloys. It’s an ideal process for custom medical parts, oil and gas components, and tough functional prototypes.

In the recent decade, 3D Printing has developed significantly. Since it can be used to quickly manufacture complex designs at cheaper costs, it has become an essential tool in a variety of industries, ranging from commercial manufacturing and medicine to architecture and custom design.

Many additive manufacturing techniques can be used to manufacture food products. Modern 3D printers come with pre-loaded recipes onboard and also allow users to remotely create their food on their computers and smartphones. The 3D printed food can be customized in texture, color, shape, flavor, and nutrition.

The technology has also proved to be effective in pharmaceutical formulations. The first formulation manufactured by 3D Printing was produced in 2015. In the same year, the FDA approved the first 3D printed tablet. 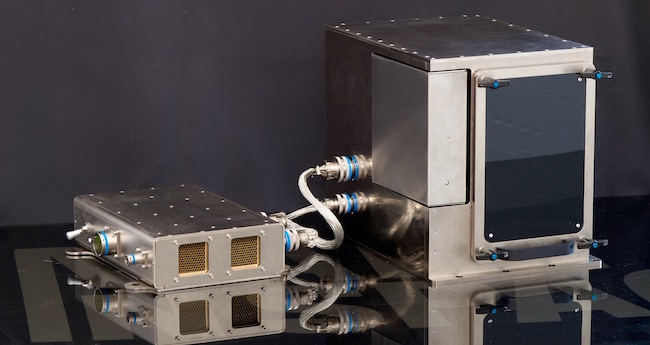 In 2014, SpaceX delivered the first zero-gravity 3D printer to International Space Station. It is now used by astronauts to print useful tools such as socket wrench.

In fact, many assembly projects planned on planets or asteroids will be bootstrapped somehow using the materials available in nearby regions. 3D Printing is one of the major steps in this bootstrapping.

The big dream of 3D Printing is “a factory in everyone’s house.” It may sound strange, but there is no denying that owning a machine that can instantly churn out infinitely customizable things is fascinating.

Much like computers and smartphones have empowered billions of people, 3D printers might do the same for manufacturing.

The factors expected to drive the market growth include the aggressive R&D and increasing demand for prototyping applications from various industry verticals, particularly automotive, aerospace, defense, and healthcare.

AI Can Now Navigate Through Unfamiliar Environments Without A Map 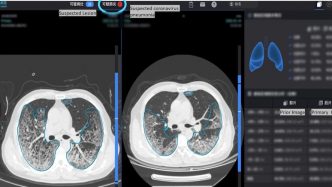