What Is A Gyroscope? Definition | Working | Uses

Different types of sensory instruments are used to determine the location and orientation of an object. The two most common of these instruments are the accelerometer and the gyroscope. When integrated into a signal device, they produce incredibly useful information.

In this article, we are going to focus on gyroscopes. They move in peculiar ways and often seem to defy gravity. These unique characteristics make gyroscopes invaluable in a variety of machines, ranging from a simple bicycle to the advanced navigation system on the spacecraft.

What Is A Gyroscope?

Definition: A gyroscope is an instrument, containing a fast spinning wheel or circulating beam of light, that is used to measure or maintain orientation and angular velocity.

A mechanical gyroscope is made of four components: 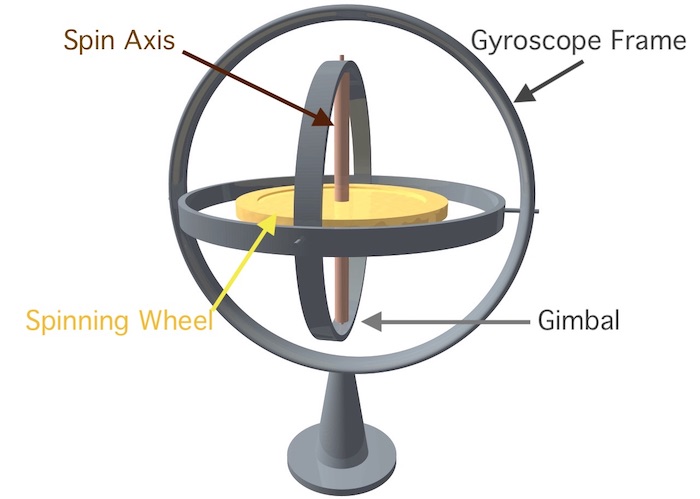 It harnesses the principle of conservation of angular momentum – a spin of a system remains constant unless an external torque is applied. This means when the spinning wheel in the gyroscope rotates, the orientation of the spin axis isn’t affected by tilting or rotation of the mounting.

There are several other types of gyroscopes based on different operating principles. For example, vibrating structure gyroscopes integrated into modern electronic devices, optical gyroscopes, ring laser gyroscopes, and the ultrasensitive quantum gyroscope.

How Does A Gyroscope Work?

Mechanical gyroscopes were first invented and named by a French physicist Léon Foucault in the 19th century. These gyroscopes contained three different-size gimbals connected to each other at two points, with a smaller (inner) gimbal moving around a fast-spinning wheel.

While the spinning wheel maintains its direction (due to the angular momentum), the gimbals are free to move on their axes, and their movements can be easily measured. In the mid-1850s, Foucault performed an experiment demonstrating that the spinning wheel can maintain its original orientation in space irrespective of Earth’s rotation.

When the wheel isn’t spinning, the gyroscope behaves like an ordinary object. When it spins at high speed on its axis, it resists movements in specific directions.

As per Newton’s first law of motion, the body remains in its state of motion until an external force changes it. When a spinning gyroscope is moved, it always tries to ‘compensate’ for this movement.

Let’s try to understand this via an example: consider a gyroscope’s axle being clamped in front of a car. In some cases, the car’s engine behaves like a gyroscope because of its mass, shape, and rotations.

If the gyroscope is spinning in a clockwise direction at a fairly high speed and the car takes a right turn (as seen from the inside of the car), forces A and B are applied to the car’s body, forcing its front end down and the back end up.

Similarly, if the car takes a left turn, its front end is forced up while the back end is forced down. The reverse will happen if you spin the gyroscope in the anticlockwise direction.

The gyroscope wouldn’t apply any additional forces as long as you are driving in the straight direction. It only applies extra forces when you move at an angle (when you turn right/left or when the vehicle’s front/back is moved up/down).

This is what we call gyroscopic precession. The orientation of an object can be measured and maintained by detecting the precession. The most precise gyroscope designs use a heavier mass (rotor) that is concentrated further from the spin axis and is balanced about a low friction pivot point.

How Are They Different From Accelerometers?

Accelerometers are electromechanical devices designed to measure static and dynamic acceleration. They are used to determine how fast and in what direction the device is moving. A three-axis accelerometer, for instance, can measure magnitude and direction (in all three axes) acceleration as a vector quantity.

Though similar in purpose, there is a major difference between a gyroscope and an accelerometer: the one can sense rotation, whereas the other can’t.

An accelerometer accurately detects the orientation of a stationary device it is integrated into, with respect to the Earth’s surface. However, once the device starts moving, the accelerometer’s readings get more complicated to interpret. In a free fall, it would show zero acceleration. This is why accelerometers aren’t that useful in aircraft.

Gyroscopes, on the other hand, maintain their level of effectiveness by being able to determine the rate of rotation around a specific axis. They can provide accurate readings (rotation rate around the roll axis) until the object stabilizes out.

A gyroscope determines the orientation of an object using the key principle of angular momentum, whereas an accelerometer identifies linear acceleration based on vibration.

Read: What Is An Accelerometer? Definition | Types | Applications

Gyroscopes can be categorized based on their operating mechanisms. The most common types of gyroscopes are:

Vibrating Structure Gyroscope: is a miniaturized gyroscope that uses a vibrating structure to measure the rate of rotation. Since it is simpler and cheaper than traditional rotating gyroscopes of similar accuracy, it is mostly used in electronic devices such as smartphones, cameras, and gaming consoles. 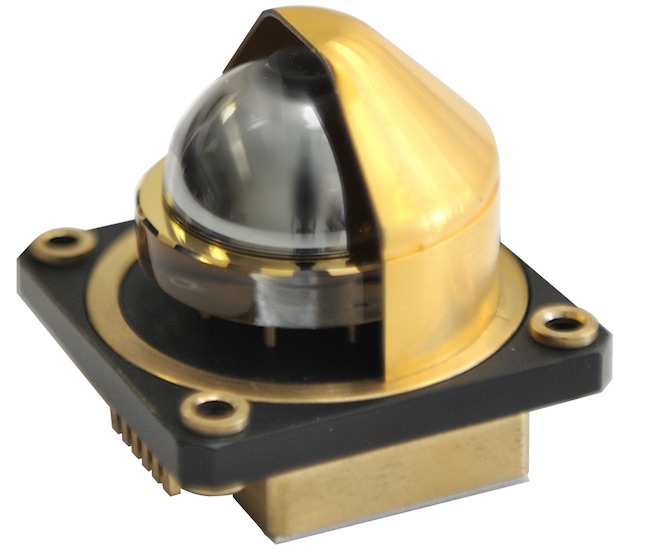 Hemispherical Resonator Gyroscope: is a compact, high performance, low noise sensor that measures the rate of rotation. It consists of a thin solid-state hemispherical shell that is driven to a flexural resonance by electrostatic forces.

Unlike most other inertial technologies, these gyroscopes are completely unaffected by their surroundings (such as extreme temperatures, vibrations, shocks). They have a virtually unlimited and maintenance-free lifespan (about 1 million hours), and thus widely used in the field of deep space exploration.

Fiber Optic Gyroscope: uses the Sagnac effect to sense changes in orientation. Its working principle is based on the interference of light, which has passed through a coil of optical fiber that can be as long as 5 km.

Since these gyroscopes lack cross-axis sensitivity to acceleration and shock, they provide very accurate rotational rate information. They have no moving components and are independent of inertial resistance to movement. This makes them a perfect device for military inertial navigation systems and space applications.

Ring Laser Gyroscope: also relies on the Sagnac effect to determine the rate of rotation. In this gyroscope, two laser beams are split and then injected through three mutually perpendicular hollow rings.

Actually, the rings could be anything (rectangles, squares, or triangles) filled with inert gases through which beams are reflected by mirrors. When the object (on which the gyroscope is attached) turns, interference patterns are produced in the corresponding rings, which are then measured by photoelectric cells. To determine the turning rate, patterns of all three rings are numerically integrated.

Since gyroscopes enable accurate calculation of orientation and rotations, engineers have incorporated them into modern technology. They are used to navigate/stabilize large ships, aircraft, and satellites.

The altitude indicator on airplanes, for example, has a circular display with a screen divided into two parts: the upper half indicates the sky (in blue color) and the lower half indicates ground (in red color). As the airplane turns, the orientation of the display shifts, accounting for the actual direction of the ground.

The Hubble Space Telescope uses three of its six gyroscopes at any given time to ensure optimal efficiency. Gyroscopes are part of the Hubble’s Pointing Control System that uses five types of sensors and two types of actuators. 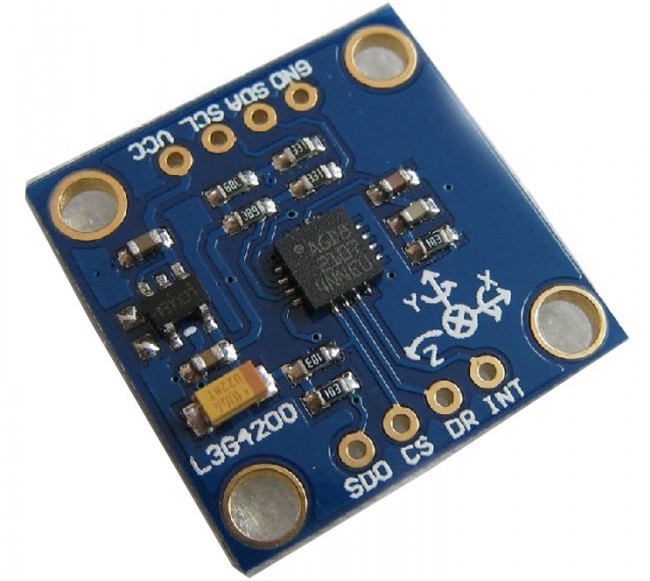 Gyroscopes have also been introduced into consumer electronics. The first application of the gyroscopes in smartphones was popularised by Apple Inc. Beginning with the iPhone 4, Apple’s phones also include a gyroscopic sensor, which enables precise calculation of yaw, pitch, and roll. 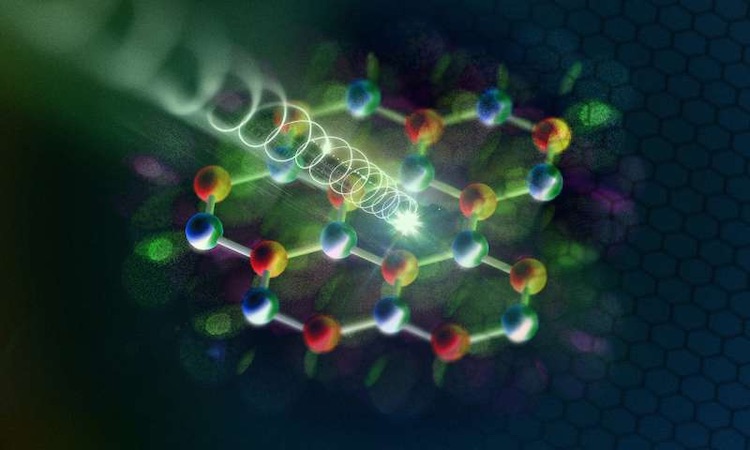 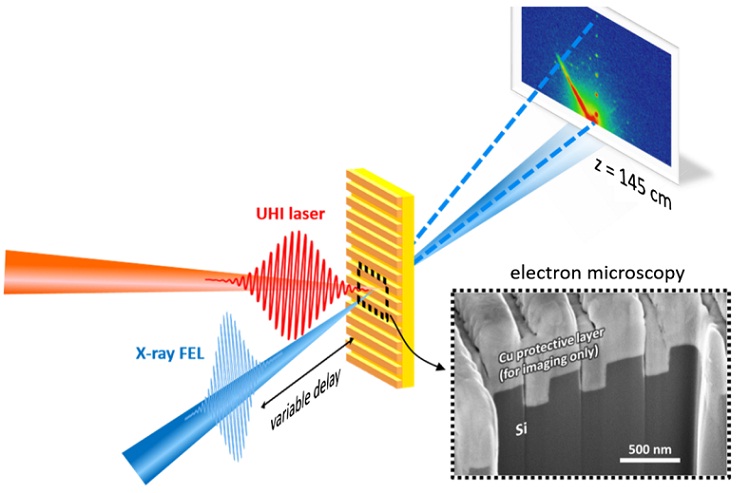