There are four fundamental forces in nature: gravity, electromagnetism, and the weak and strong nuclear forces. One of the main goals of physicists is to develop a theory that the can describe all these forces.

While trying to unite all the forces together, theoretical physicists have come up with many different interesting ideas and new theories over the past 6 decades. One of the most promising of these theories is String Theory.

String Theory has now become the most controversial concept in physics that aims to merge the two pillars of 20th-century physics: Einstein’s theory of relativity and quantum mechanics. In simple terms, it’s a comprehensive framework that can explain all of physical reality (if proven true).

The Basic Idea of String Theory

Pick anything around you. Let’s say you picked up an apple from the table. What is the apple made of? Well, to answer that question you need to look deep inside it.

Atoms are not end of the story either because if you zoom further, you can see electrons and nucleus. The nucleus is itself made of protons and neutrons. If you grab one of these particles (let’s say a neutron) and magnify it, you will find yet more tiny particles inside called quarks.

Now this is where the conventional idea stops and string theory comes in, suggesting that there is something else inside these tiny little particles.

Conventional idea says there is nothing inside quarks but string theory says you will find a tiny string-like filament of energy. They are similar to the string on a violin: when you pluck the string, it vibrates and creates a little musical note.

The tiny strings in string theory, however, do not produce musical notes. Instead, when they vibrate, they produce the particles themselves. Each type of vibration corresponds to different particles.

Illustration of a string vibrating in a pattern

If string theory is correct (it is still not proven), all things in the universe are nothing but a dancing vibrating cosmic symphony of string.

As of now, string theory is just a simple idea. There is no direct experimental evidence that it is the correct description of nature.

There are two basic classes of elementary particles in the universe: bosons and fermions. String theory predicts that there exists a relationship between these two particles, called supersymmetry, under which a boson must exist for every fermion and vice versa.

The supersymmetry principle was discovered outside of string theory. However, its incorporation into string theory allows certain terms in equations to cancel out and make sense. Without this principle, string theory’s equations lead to physical inconsistencies, such as imaginary energy levels and infinite values.

In other words, combining the idea of supersymmetry with string theory yields a better theory, the superstring theory.

Physicists hope that experiments with particle accelerators and astronomical observations will reveal a few supersymmetric particles, providing support for the theoretical framework of string theory.

Modern physics has two completely different law: general relativity and quantum mechanics. Relativity studies large objects on the scale of planets, galaxies and the universe, while quantum mechanics tends to study tiny objects in nature at the smallest scales of energy levels of atoms and subatomic particles.

It is not well-understood how gravity affects tiny particles. Theories that seek to describe gravity according to the principles of quantum mechanics are called theories of quantum gravity, and one of the most promising of all such theories is string theory. 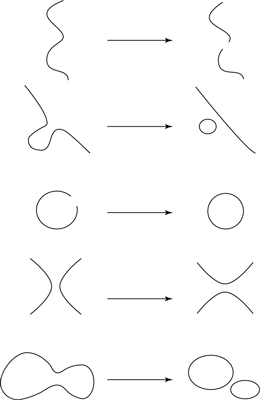 The 5 fundamental interactions of Type I strings

Such strings, known as Type I strings, could go through 5 basic types of interactions. These interactions depend on the ability of a string to have ends join and split apart.

Scientists believe that closed strings have special attributes that can describe gravity in quantum mechanics.

The characteristic length scale of strings is considered to be on the order of 10−35 meters, or the Planck length. This is the scale at which the effects of quantum gravity become significant. 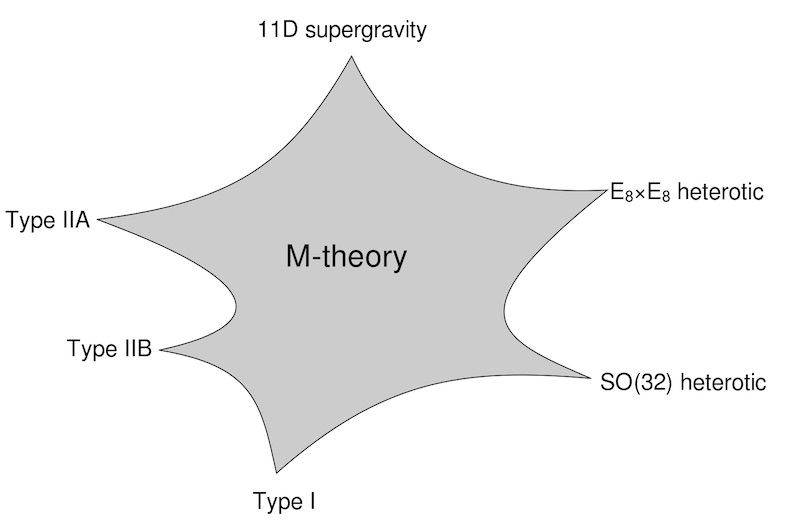 Relationship between M-theory, the superstring theories and 11D supergravity | Wikimedia

In 1995, however, an American theoretical physicist Edward Witten unified all five theories in one 11-dimensional theory called M-theory. It may provide a framework for building a unified theory of all the fundamental forces in the Universe.

String theory comes from an S-matrix theory, a research program started by Werner Heisenberg in 1943. The aim of this program was to replace local quantum field theory as the basic principle of elementary particle physics.

The particle accelerators of the 1950s and 60s produced Hadrons in abundance. Physicists invented many different models to describe the pattern of spins and masses of these strongly-interacting particles (made-up of quarks).

An Italian theoretical physicist, Gabriele Veneziano played a major role in developing these early models. He formulated the foundations of string theory in 1968 when he discovered tiny little strings could describe the interactions of Hadrons.

He also published a paper in 1991, which describes how an inflationary cosmological model can be obtained from string theory.

Today, through the combined efforts of many researchers, string theory has emerged into a broad and varied topic with connections to pure mathematics, cosmology, condensed matter physics, and quantum gravity.

Is String Theory The Theory of Everything?

Well, the quick answer is No.

A Theory of Everything is a hypothetical framework of physics that fully describes and connects together all physical aspects of the universe. Finding such a theory is a major dream of theoretical physicists.

In pursuit of this goal, string theory has become a promising candidate for the Theory of Everything. So far, it has successfully explained many complex phenomena, including black holes, which require both quantum mechanics and general relativity to study them. 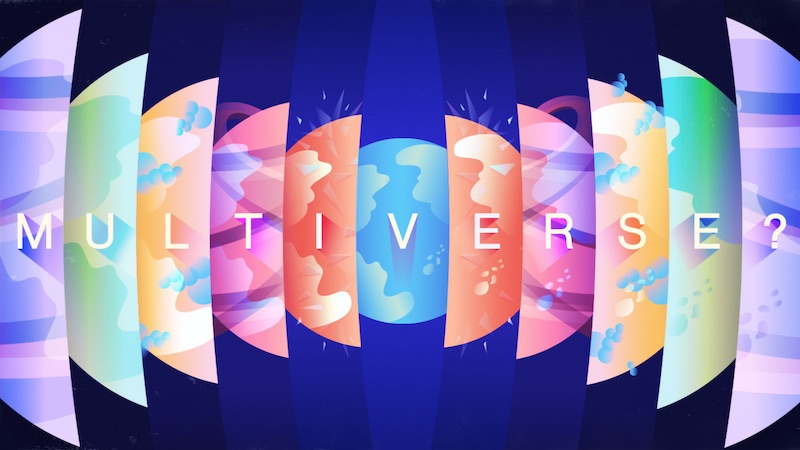 It has also provided new insights into quark-gluon plasma and produced many results, some of which may seem incomprehensible or absurd. For example, String theory permits about 10500 universes or a vast multiverse. This is one of the reasons, it has faced numerous setbacks in the past.

Read: What’s Outside The Universe? Is Multiverse Theory True?

Why Is String theory Important?

Although string theory hasn’t produced any testable experimental predictions so far, the maths in string theory does work out. And that’s why it is extremely useful.

Over the past few decades, string theory has offered some convincing and compelling solutions. It has

Researchers have also established a link between the framework of quantum field theory and string theory, which is called AdS/CFT correspondence.

So, maybe the story of string theory is not the theory of everything, but it is certainly not an isolated body of research taking place in some obscure corner of science. Instead, it may point us in the right direction and help us discover new aspects of the quantum world and some beautiful mathematics.

Read: What Is A Tesseract? A 4D Object That’s Impossible To Build

We don’t yet know what the true nature of reality is but we will keep digging until we find out. 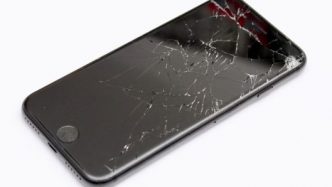 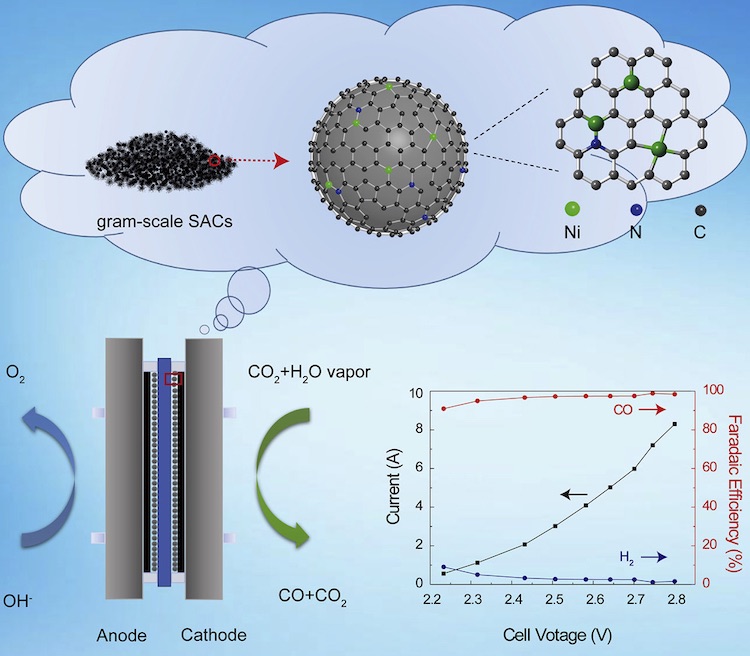