No matter how sophisticated our technology gets or how well we know the laws of nature, we will always be at the mercy of our mother nature. On average, about 60,000 people die per year due to natural disasters. They are responsible for about 0.1% of total deaths globally.

While earthquakes and floods are considered far more fatal, tornadoes can be devastating and life-threatening as well. Some of the deadliest tornadoes have occurred in recent recorded history.

Tornadoes are a fast rotating vortex of air whose one end is connected with a cloud cover, usually cumulonimbus, and another end by the Earth’s surface underneath. Every year, the United States experiences about 1,200 tornadoes, more than any other nation in the world.

How Are Tornadoes Measured?

The intensity of a tornado is usually measured by the damage it caused. While real-time measurement is also an option (via remote sensing techniques), it is not feasible enough for large-scale use.

The most widely used tornado intensity rating system is the Fujita scale, which has six different categories ranging from F0 to F5. Based on the wind speed and total level of destruction, a tornado can be arranged in one of the six categories. The Fujita scale has been replaced by an enhanced version in the United States and Canada.

Much similar to the Fujita scale, the TORRO scale is also used to measure the severity of a tornado but it’s only used in the United Kingdom. Below are 12 deadliest tornadoes in history. 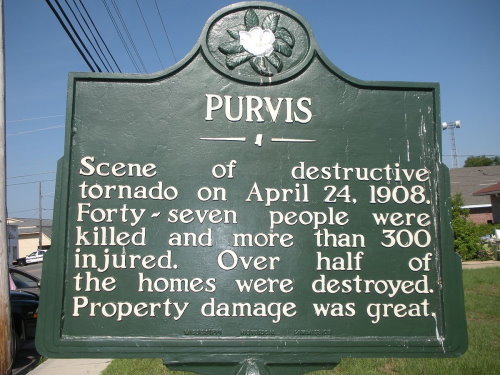 A marker placed in front of Purvis Public library in memory of the 1908 tornado | Image Courtesy: Wikimedia Commons

Amite and Purvis tornado was part of the catastrophic Dixie tornado outbreak that affected 11 different states in the Midwest and the Southern United States. The tornado originated just outside Livingston, Louisiana on April 24, 1908.

It first struck Amite, killing 29 people and leveling off almost every tall structure. In Purvis (Mississippi) the fatalities reached 55. It was the eighth deadliest tornado in U.S history. 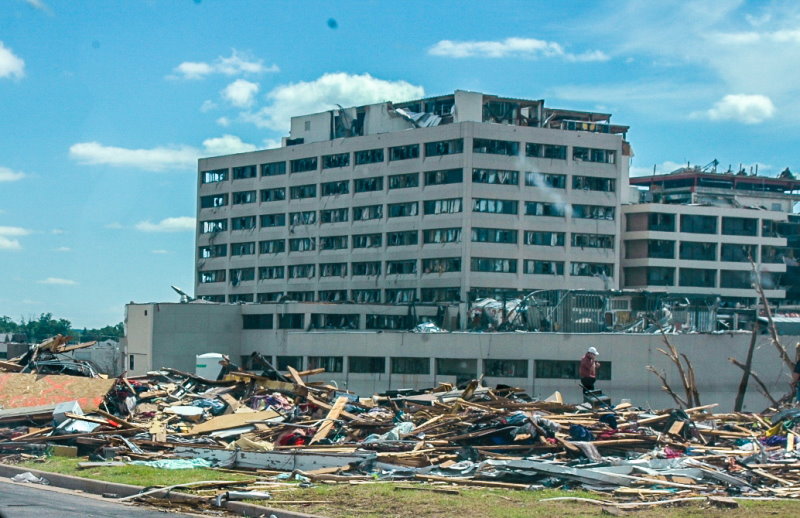 The catastrophic Joplin tornado was a multiple vortex tornado that destroyed more than half of Joplin city (Missouri) in late May 2011. It was a part of a much larger tornado outbreak sequence.

At its peak, the tornado was about 1.6 km in width and was the most destructive. The peculiar thing about this twister was how quickly it grew larger both in size and intensity. It destroyed some 7000 buildings, most of which were residential in Joplin as well as Jasper and Newton Counties.

The Joplin tornado remains the costliest and seventh deadliest tornado in the nation’s history with $2.8 billion in damages.

The Glazier-Higgins-Woodward tornadoes were part of a single tornado supercell that hit U.S states of Texas, Oklahoma, and Kansas on April 9, 1947. The initial tornado originated in Texas near the town of White Deer. Before reaching Higgins city, it destroyed small towns of Canadian and Glazier. In Texas alone, the tornado killed more than 60 people.

The supercell then moved into parts of Oklahoma and Kansas leveling almost everything on the way. About 107 people died in Woodward, Oklahoma.

In April 1936, a total of 12 tornadoes struck the Southwestern United States in what proved out to be the nation’s second-deadliest tornado outbreak to date. In terms of severity, two tornadoes of this outbreak stand out. The Gainesville Tornado was one of them.

On April 6, two separate tornadoes merged near Gainesville city in Georgia. Within a matter of minutes, the entire downtown Gainesville was destroyed. About 203 people were reported to have died due to the calamity.

On a different note, Gainesville is the only small city in the United States that has suffered two F4 intensity tornadoes in its recorded history (the first one occurred in 1903).

Tupelo Tornado was part of the Tupelo-Gainesville Tornado outbreak that occurred on April 5-6, 1936. On 5th, a day before the events of Gainesville, a massive and far more destructive tornado struck Mississippi’s Tupelo city.

The tornado completely wiped off a large section of the city’s residential area, which include about 48 city blocks and 200 to 900 houses. At least a dozen large estate mansions were also wrecked.

Among those who were rescued that day were a mother and a one-year-old boy, who would later become the greatest musician the world has ever seen. His name was Elvis Presley. 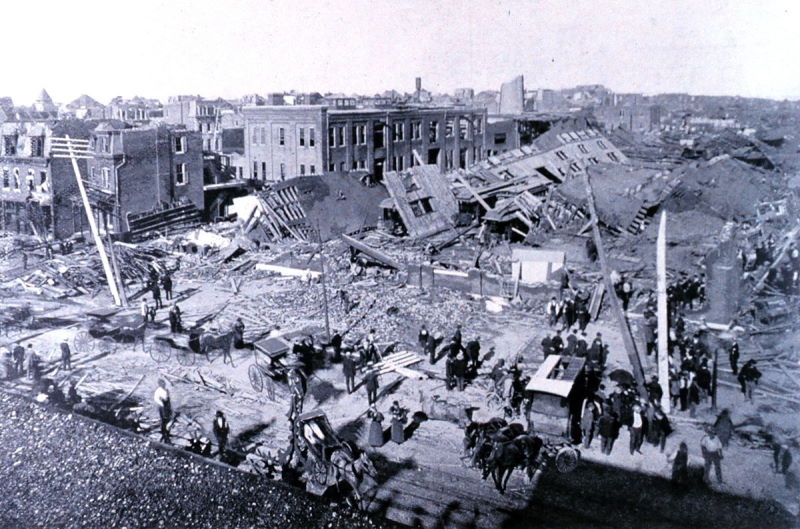 The St. Louis – East St. Louis Tornado was a part of the tornado outbreak sequence that occurred in May 1896, affecting large areas of Central and Southern United States. It was one of the most violent and destructive tornadoes in the world.

The total amount of damage caused by the tornado was $10 million or $2.2 billion after normalization (2001 dollar). At least 250 people died, while thousands were left homeless.

On May 7, 1840, the Great Natchez Tornado bought mayhem in southern Mississippi. The tornado formed over the city of Natchez and moved along the Mississippi river, decimating everything from trees and dwellings to steamboats. It remains the second deadliest tornado in America’s history.

More people died on the river than on land, as a powerful gust of winds annihilated every small and medium boat present in the area. In total, more than 300 people died and hundreds were seriously injured. This number is most likely to be much higher since slave deaths were not always included in official records.

The Soviet Union Tornado Outbreak, also known as Ivanovo tornado outbreak, struck northern regions of Moscow on June 9, 1984. A total of eleven tornadoes were confirmed, at least three of which were of F3 intensity or higher.

The most destructive of the bunch (F5 intensity) emerged from the city of Ivanovo, which took more than 90 lives alone. It remains Russia’s deadliest and third-deadliest tornado outbreak in Europe’s history.

Tornadoes, especially the powerful ones, are not a common occurrence in Italy. Perhaps the deadliest tornado in Italy’s history (as well in continental Europe’s) was the Sicilian Tornadoes of 1851.

Sicilian tornadoes were two tornadoes that struck western Sicily (Italy) most likely in December 1851. The tornadoes destroyed the towns of Marsala and Castellammare, causing death to 500 people maybe more.

On September 23, 1551, the Grand Harbor of Malta (located south of Italy) was hit by a devastating tornadic waterspout. Waterspouts are essentially tornadoes that originate on large water bodies. Land tornadoes can also migrate to water. 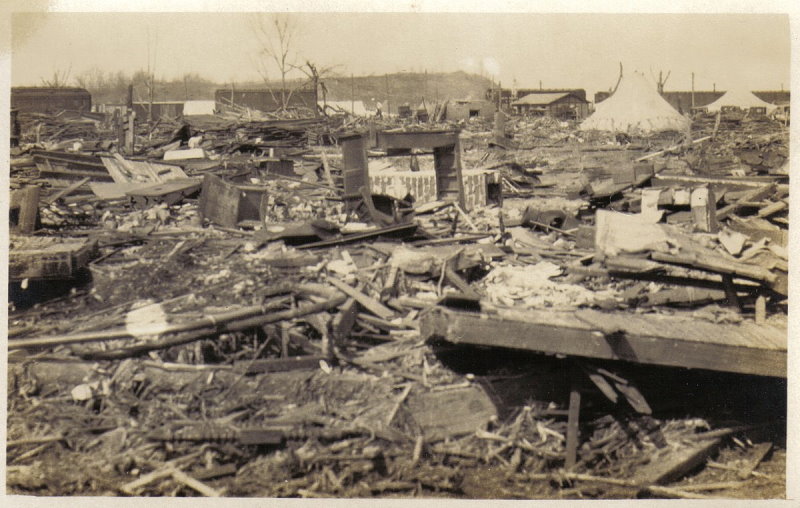 The aftermath of the Tri-State Tornado. Ruins of town Griffin, Indiana

The Tri-State tornado was the longest (track) and the deadliest tornado in the history of the United States. On 18 March 1921, it first appeared as a small funnel-shaped cloud over a township of Moore in the U.S state of Missouri.

By the time it entered southern Illinois, the tornado had completely transformed into a gigantic spiraling vortex obliterating everything that comes in its path. Before dissipating, it leveled off few towns in southern Indiana as well.

The total monetary loss caused by the Tri-State tornado is believed to be around $1.4 billion (1997 dollar value). About 15,000 homes, nine schools, and a factory were destroyed across the three states.

Perhaps the deadliest tornado in history occurred on April 26, 1989, in Manikganj District, Bangladesh. This south Asian country is among the handful of nations that are periodically hit by devastating tornadoes.

Daulatpur-Saturia tornado vortex was more than a kilometer wide and traveled 80 km into the Dhaka region. Though the officially recognized Fujita ranking of this tornado is F3, the estimated maximum wind speeds of 418 km/h would easily make it an F4 tornado.

Read: 12 Most Deadliest Substances on Earth

The storm wiped clean more than 20 villages and several large towns. Due to poor infrastructure and disaster preparedness, about 80,000 people lost their homes. The estimated death toll was 1300 people. 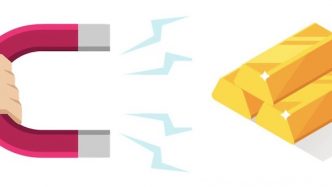 Is Gold Magnetic? Does It Stick To Anything? 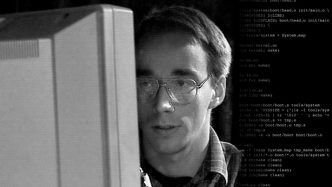